In a multiplex mad for the multiverse and fanatical for franchises, never forget the simple pleasures of a self-contained, high-concept pitch: Idris Elba fights a lion. There, screenwriter Ryan Engle (“Non-Stop,” “The Commuter”) found one. He did it. It’s brilliant. And yet, for all of Engle’s inspired ideas on what a big-budget studio movie can be, he made one fatal mistake when building “Beast”: somehow, when Idris Elba fights a lion, you’re going to end up rooting for the lion.

That’s no diss on Elba, who remains one of our most charismatic and eminently watchable movie stars. Nor is it a ding against the two talented young actresses (Iyana Halley and Leah Jeffries) who play his daughters. Hell, it’s not even a mark against director Baltasar Kormákur’s vision, which is often at its most compelling when the action-centric filmmaker dips his toes into horror territory. It all goes back to the genius idea to pit Elba against a big cat, which Engle kicks off with a horrific feline origin story that can only inspire empathy toward the very angry, very large kitty.

“Beast” opens deep in the South African savanna, as a group of clearly bad people/dumb poachers creep up on a majestic pride of lions in the dark of night, kill almost all of them, and then find themselves mercilessly picked off by the one survivor, a massive male who, frankly, has a point. (Both Kormákur and the audience have a ton of fun watching the big cat snatch baddies into the darkness with zero prejudice; if only all of “Beast” was so darkly amusing.) No wonder he’s mad, no wonder he wants to kill, now if only his rampage wasn’t interrupted by — oops, oh no, there they are: a family of very nice and very stupid people. 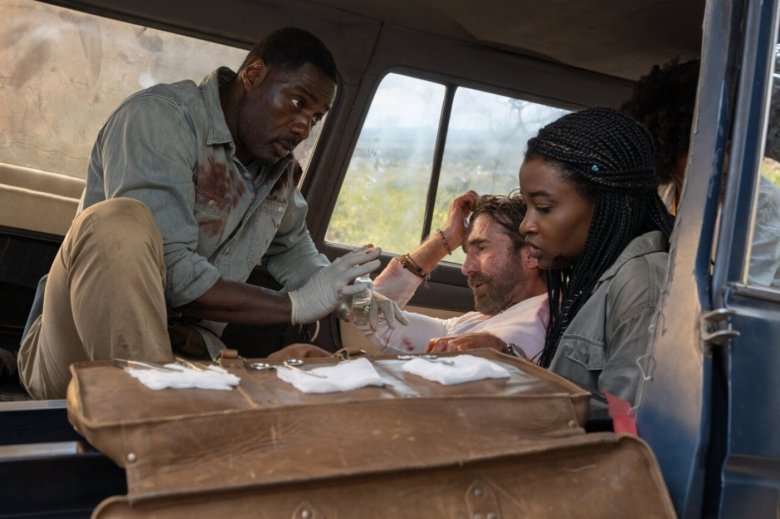 Things are already tough for Nate (Elba), Mere (Halley), and Norah (Jeffries) when they arrive in South Africa (the film was shot on location, and looks it). Their matriarch (she appears to Nate via a series of nightmarish dream sequences, woefully out of place with the rest of the film) recently passed from cancer and Nate and his girls are attempting a little bit of healing. The answer: Head to her small village, where they might reconnect with each other and her precious memory. The landscape is gorgeous, the people are welcoming, but their long-simmering resentments require a much larger outlet. Perhaps a murderous lion will bond this family back together? Worth a shot!

The film’s first act offers plenty of details that will (obviously) come into play, like that there’s no wi-fi or cell service, or that Nate is a doctor, or that male lions are intent on protecting their prides at all cost (they’ll rip other lions “limb from limb” to do so!). There’s also their “uncle” Martin (Sharlto Copley, playing the rare non-manic role), introduced as an “enforcer” for a local game reserve plagued by poachers, though the second whipsmart Norah mentions the concept of “anti-poachers,” it becomes clear just what Martin’s actual job is and why he’s so handy with a gun.

After a series of mishaps and accidents land the foursome deep in murderous lion territory, “Beast” eventually adopts the pacing and twists of horror films. And while Kormákur is best known to American audiences for action movies like “2 Guns” and “Contraband,” the Icelandic director has a real knack for weaving together guns blazing with true chills (to say nothing of the gnarly wounds many of his human stars endure, care of a really not-so-bad CGI lion). While nothing beats the film’s opening sequence, which delights in playing with the pitch-black darkness of the savanna at night and the threat of a lion who might sneak out and grab you at any minute, when “Beast” goes full terror, it delivers. 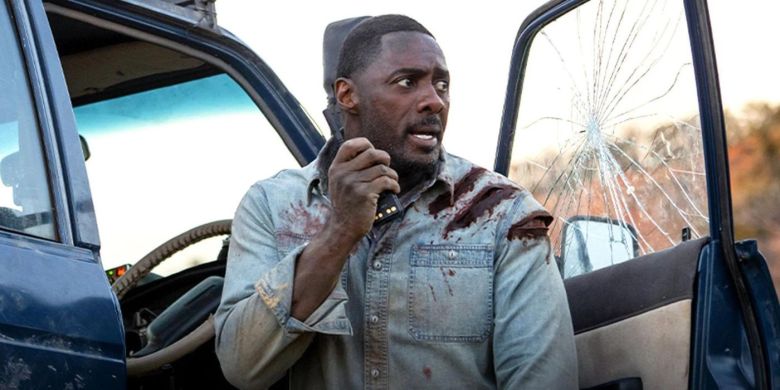 Unfortunately, its stars also find themselves beholden to some of the less-clever elements of horror-movie storytelling. Nate and the girls are innocent, but they are also truly, truly stupid, and despite often showing signs of intelligence (again, Nate is a doctor! Mere is a gifted artist with big college plans!), they crumble into scary-movie tropes when faced with their furred nemesis.

You don’t need to know about lion behavior patterns to know that they’re not going to simply give up the fight, or that stepping away from the relative safety of your vehicle is a bad idea. You don’t have to be a doctor to know how to identify a lion zipping around the savanna (during one pivotal scene, Nate screams at Martin, “What should I be looking for?,” and if you’ve got a game enough audience, they’ll likely scream right back, “I don’t know, a LION?”).

You don’t need to be particularly clever to know how this will all end, but that doesn’t mean it needs to be so boring as it chugs toward cookie-cutter conclusions. Idris Elba fights a lion. It’s genius. So why does “Beast” feel more like a whisper than a roar?