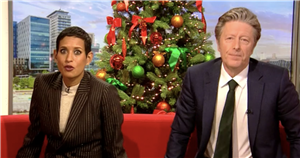 On Thursday (December 22), the show was being helmed by Naga and her co-host Charlie Stayt, while Carol joined in to present the forecast.

But as Naga brought up the dreaded question of whether we could see snow on Christmas Day, Carol had a few words to say.

Naga kicked things off by saying: "Carol's taking a look at the weather, of course, for us this morning.

"Carol… I think we're never allowed to ask you about snow on Christmas Day. You always kind of have that really stern look whenever I ask. Doesn't she?" Naga asked Charlie.

Reacting with a grin, Carol replied: "Naga, I prefer it when you ask me about the snow on Christmas Day on Boxing Day, to be honest, but hey ho!

"I'm going to start with that, because of course what constitutes a white Christmas is snow falling somewhere in the 24 hours of Christmas Day.

"At the moment, the highest chance of seeing snow, if you want it, is across the north and north-west of Scotland, but it may well be later in the evening or perhaps overnight."

That wasn't all, however, as Naga also commented on her own weather knowledge earlier in the programme.

She claimed she "doesn't know what she can say" when it comes to the forecast.

She said: "So, we've had a cold snap. We've had a slightly milder snap. Carol, it's cold again?

"I don't even know if, or what, I can say, because the temperatures seem to be all over the place at the moment!"

Carol then agreed: "They are up and down, you're quite right Naga!"

It comes after Carol was forced to hit back as her co-star Jon Kay claimed she "never calls him".

Sally Nugent commented earlier in the week: "I like the way you did that Carol! Just to stop Jon asking you again what the weather's going to be like on Christmas day. Very clever!"

Carol chimed in: "I know what he's like, Sal! I've got his number in more ways than one!"

Giggling away, Sally responded: "Exactly, we both do!," before Jon claimed: "But you never call me?"

Not holding back, Carol told him: "You know what Jon, there's a reason for that!"