Hollywood’s biggest night — and the glitzy, glam-filled capper of the annual awards season — unfolded Sunday evening at Hollywood & Highland’s Dolby Theatre, where the entertainment industry’s biggest and brightest turned out en masse to celebrate, and potentially walk away with a statuette of their very own.

By the time this particular Oscar Sunday kicked off, there were plenty of big questions still up in the air, from who would win a fraught Best Picture race to the question of whether or not Marvel or Netflix would make history with some major wins (answer: well, some of them). Peter Farrelly’s embattled “Green Book” walked away with a Best Picture win, Spike Lee didn’t break his Best Director losing streak (though a win for Best Adapted Screenplay seemed to ease the pain), and the acting awards offered at least one mild surprise, but the most exciting stories were often found elsewhere.

Backstage at the Academy Awards, everyone is literally a winner, as each newly minted Oscar recipient caps off their win with a trip backstage to chat with press, often serving up some of the evening’s most notable, interesting and just plain entertaining speeches and answers. From long-simmering controversies to some fresh historic wins, a Hollywood pushing (perhaps not always with ease) toward change was the biggest and best story of the evening.

Fresh off their Best Picture win, the “Green Book” team hit backstage, where they were immediately asked about the impact of the controversy on their film. “It was discouraging, but we always went back to the film,” producer Jim Burke said. “If we had a bad day, we’d pop in the movie, and we were reminded that we’re all really proud of this film.”

Later, the “Green Book” team was asked if they saw any relation between President Donald Trump and his supporters and Mortensen’s character, and if there was any message they wanted to impart on their viewers. “I never thought of him as a MAGA guy,” director Peter Farrelly said. “It’s a different era, and whether he would have been one of those guys, I don’t know. He was a guy who was flawed at the beginning and learned by being in a car with a man who was completely different from him, and they got to know each other, and they realized that they had a lot more in common than they thought they did starting out this journey.” 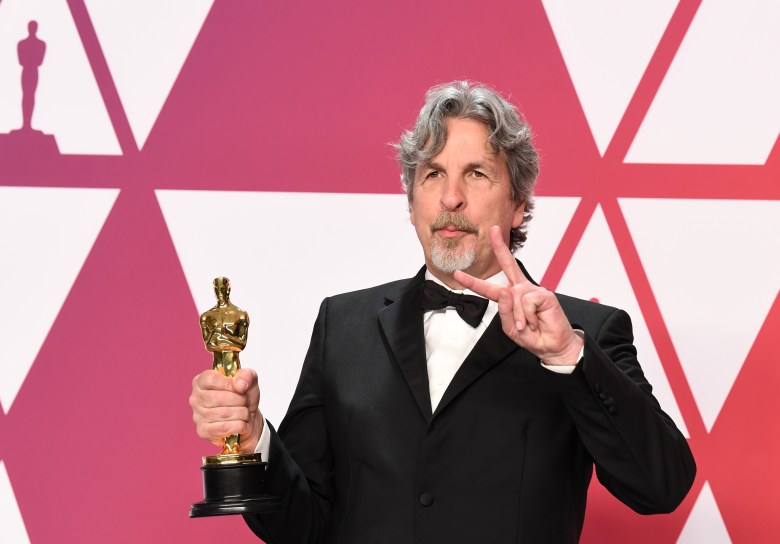 He added, “The message is, talk to each other, you’ll find out we all have a lot in common. It’s a hopeful message. Sometimes, it seems like there is no hope, but there is, all we have to do is talk, and we get closer together.”

Despite a Best Picture winner dogged by controversy steeped in its retrograde handling of racial issues, true diversity was present elsewhere. Halfway through the show, the 2019 Oscars had already blown past the previous record of black winners (four in 2017), eventually topping out with seven winners across a number of very different categories.

The first Oscar winner to arrive backstage was newly minted Best Supporting Actress Regina King, who was asked about how she felt receiving her first Oscar and following in the footsteps of pioneering black actresses like Hattie McDaniel, who won the same award in 1940.

She added, “I feel like I’ve had so many women who have paved the way, are paving the way. I feel like I walk in their light, and I also am creating my own light. There are young women that will walk in the light that I am continuing to shine and expand from those women before me.” 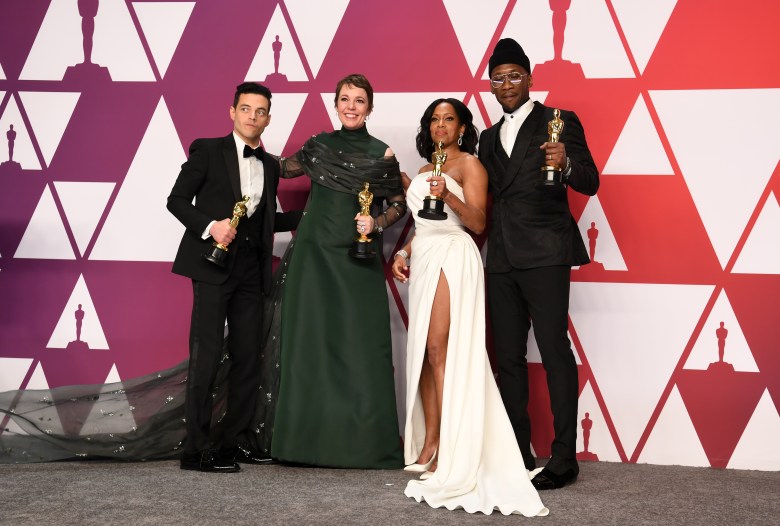 Best Animated Short Film winner Domee Shi, a first-time winner for writing and directing the Pixar short “Bao,” used her time backstage to point out that more women are coming into the animated arena.

“The future is bright!,” Shi said. “I’m just so happy that ‘Bao’ was so embraced by the world and by the Academy. I’m also happy to say that I am now not the only female short director at Pixar. There’s two amazing shorts that came out of Pixar the last couple of weeks: ‘Pearl’ and ‘Kitbull,’ directed by the very talented Kristen Lester and Rosana Sullivan. … These ladies are super talented.”

Shi continued, “‘Bao’ blazed a trail, but we’re just happy to be one of many female directors to come.”

#MeToo and Time’s Up

While issues related to the #MeToo and Time’s Up movements took a backseat after last year’s ceremony, which made history as the first Oscars to unfold in the so-called post-Weinstein era, lingering questions about its impact on Hollywood were still hard to totally ignore.

When “Bao” winners Domee Shi and her producer Becky Neiman were asked about former Pixar chief John Lasseter and his return to Hollywood after he was hit with a number of allegations of sexual harassment from his own employees, the pair were forced to demur. “We actually can’t comment on that,” Shi said. “But we can talk for days about Pete Docter, he was our executive producer, but not only that, he was a true mentor to us, so inspirational, so caring, so kind.” 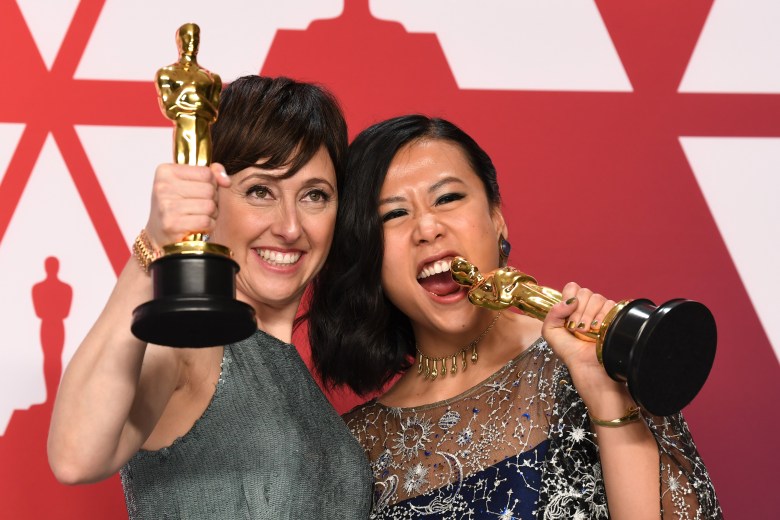 Earlier in the evening, Regina King offered her own take on the movement, “The #MeToo movement, I think, has gone beyond [harassment issues], with creating opportunities for women to find their voice, even beyond just being violated sexually, but being marginalized. When you have put in the work to be at the table, and being denied a seat at the table, this movement has allowed us and inspired us to say, ‘no, I am supposed to have a seat at the table.’”

King specifically pointed to her director, Barry Jenkins, for fostering an environment conducive to such discussions while making the film, adding, “When you have men and women working together, pretty amazing things happen.”

The night played home to a number of historic winners, including two “Black Panther” creatives, Mexico’s very first Best Foreign-Language Film win, and a sea change in the animation world.

Best Costume Design winner Ruth E. Carter, whose win marked the first Oscar win for Marvel (and a much-deserved win for the longtime designer, who was previously nominated for her work on “Amistad” and “Malcolm X”), was honest about how much she wanted to win. 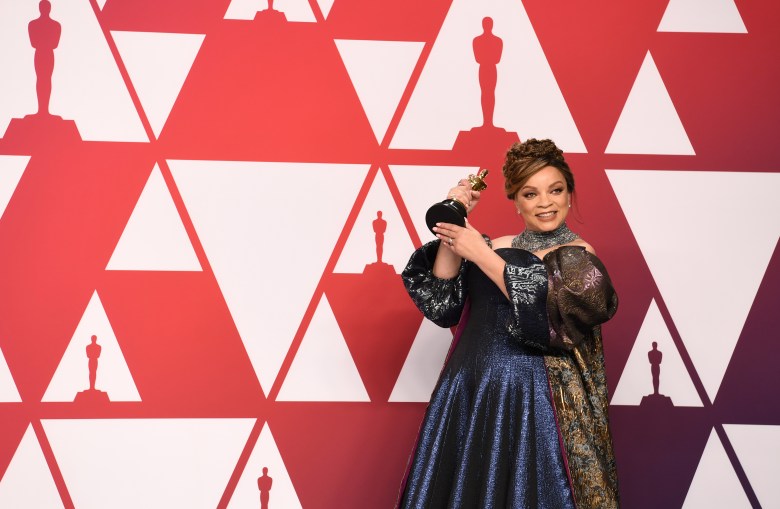 Asked specifically about what her win — the first for a black costume designer in the history of the Oscars — means for other creators of color, Carter said, “It just means that we’ve opened up the door, finally the door is wide open. I’ve been struggling and digging deep and mentoring and doing whatever I could to raise others up, and I hope through my example, this means that there is hope, and other people can come on and win an Oscar just like I did.”

Another big win for Marvel and “Black Panther” came with a much-anticipated Best Production Design win for Hannah Beachler (alongside Jay Hart), the first black woman to win the Oscar in the category. When asked about her advice for other aspiring production designers from minority backgrounds, she was clear: “Don’t ever let anybody tell you you can’t do this craft, you are worthy and you are beautiful, and this is something for you.”

“Spider-Man: Into the Spider-Verse” co-director Rodney Rothman also picked up a historic win when the Sony animated feature won Best Animated Feature, making him the first black director to win the Oscar. Asked about the responsibility of he felt about bringing an Afro-Latino character to life. 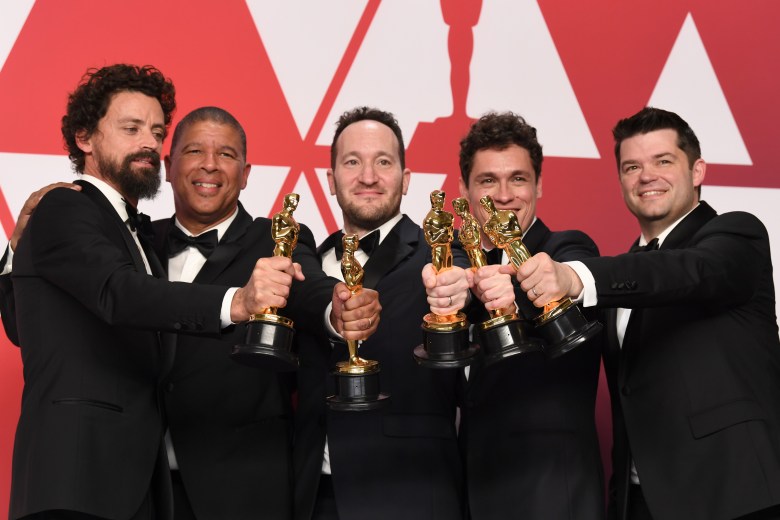 “It’s a huge responsibility, this is someone who is going to be seen and taken to heart by millions of people,” Rothman said. “But everybody has to know that our whole team … all of them deeply felt the importance of that idea and that mission, so Miles had a lot of backup, he had a lot of people who really loved him as a character, believed in his story, and knew how important it was going to be to black kids, Latino kids, to kids who just want to be their best selves, no matter who they are.”

Best Actor winner Rami Malek, whose win for “Bohemian Rhapsody” marked the first time an actor of Egyptian descent had won the award, was also inspired by the possibility of a world in which so-called firsts have passed out of fashion.

“I grew up in a world where I never thought I was going to play the lead on ‘Mr. Robot,’ because I never saw anyone in a lead role that looked like me,” Malek said. “I never thought that I would possibly play Freddie Mercury, until I realized that his name was Farrokh Bulsara. And that is the most powerful message that was sent to me from the beginning. That was the motivation that allowed me to say, ‘Oh, I can do this.’”

He continued, “When that man steps on stage, and he moves people in a way that no one else does, he has the ability to look everyone in the eye and see them for who they are, and that’s because he was struggling to identify himself. And all of that passion and virtue and everything burning inside of him allowed him to look to everybody else and say, ‘Hey, I see you. Not right there in the front, there, in the back, I see all of you, I will play to all of you. And together, we will transcend. … We are all human beings, and forgive me for this, but collectively, we are all the champions.”

The 91st Academy Awards ceremony took place on Sunday, February 24, 2019 at the Dolby Theatre in the heart of Hollywood.