The third season of Ramy Youssef’s award-winning show Ramy, which dropped on Hulu at the end of September, saw the titular American-Egyptian protagonist head to Jerusalem to cut a business deal with a tough-talking diamond dealing clan in an episode entitled Egyptian Cigarettes.

Naïve to the realities of the 74-year Middle East conflict, he gets a taste of life on both sides of Israel’s controversial separation wall.

In between meetings with his new Israeli partners at a luxury villa, he squeezes in a date with a Palestinian girl in East Jerusalem on the other side of a checkpoint, where his actions will result in a local teenager being detained by the Israeli army.

20 Questions On Deadline Podcast: Ramy Youssef Pays Tribute To The Feminist Heroes Of Iran; Why Season 4 Would Be 'Ramy's Ending

International productions set in Israel and the West Bank rarely shoot in either territory. Most head to neighboring Jordan, and sometimes Morocco, deterred by the possibility of a flare-up in the conflict, in which both Israelis and Palestinians have resorted to violence.

Youssef and his producers opted, however, to film the episode on location in Jerusalem, with leading Palestinian filmmaker Annemarie Jacir in the director’s seat.

Jacir, who is best known internationally for her feature films Salt Of This Sea, When I Saw You and Wajib, said a key factor in her agreeing to come aboard the project was the way Youssef and co-writer Maytha Alhassen chose to show the everyday reality of Palestinians against the backdrop of the conflict.

“The script was really funny, but it was also something I hadn’t seen before,” she explains.

“We’ve never seen a mainstream American show that captures how brutal the Israeli army is, especially to kids; or Palestinians getting denied entry and interrogated, which happens all the time, simply for being Palestinians. And of course, Americans rarely see the Apartheid wall and the checkpoints, or kids getting arrested. I couldn’t believe that an American network was ok with it.”

Jacir is a mover and shaker on the independent Palestinian cinema scene. Alongside making her own films, she also co-runs Palestine and Jordan-based production company Philistine Film with producer husband Ossama Bawardi, which over the years has steadily developed a local pool of trained and experienced crew.

With artist sister Emily Jacir, the filmmaker is also the co-founder of the Dar Yusuf Nasri Jacir for Art & Research Centre in the West Bank city of Bethlehem, based in a traditional 19th-Century Stone house that has been in their family for generations.

The Ramy shoot in May 2022, was due to film mainly in Jerusalem but tensions in the city ratcheted up following the killing by Israeli forces of veteran American-Palestinian Al Jazeera journalist Shireen Abu Akleh in the West Bank city of Jenin on May 11.

The decision was taken to move most of the filming to Haifa, with Jacir’s long-time art director Nael Kanj and crew building two sets, one a reconstruction of a checkpoint, the other, a section of the separation wall. Filming also took place against the backdrop of the actual wall in a village outside the port city.

New Jersey-raised, American-Egyptian stand-up comedian, actor and Ramy creator Youssef is credited with breaking fresh ground with the show’s authentic depiction of the realities of the Arab diaspora in the U.S., particularly those of Muslim faith.

Did he manage to hit the same level of authenticity with his Middle Eastern episode? Jacir thinks yes.

“It’s ultimately a story about a naïve Arab American character who thinks what he’s doing, that flying to Israel with Orthodox guys, is normal and to an American audience, it is normal. But once he’s on the ground here, it becomes very clear how completely abnormal the situation is,” she says.

“Ramy in the show is a very naïve guy. He misreads situations. He’s constantly putting his foot in his mouth, saying inappropriate things, and just taking it too far. It’s the source of both the comedy and darkness in the show. He’s so naïve that he tells the Palestinian girl on his date that going through the checkpoint is like going through the Lincoln Tunnel, only you don’t have to pay… The real Ramy, on the other hand, is super smart. He’s a really, lovely guy, but he’s not naïve. He’s very familiar with what is going on here.”

Although Jacir was ultimately directing from Youssef and Alhassen’s script, they discussed the storyline and cultural details in-depth before agreeing to work together.

“I had to make sure we were on the same page. Ramy knows exactly what he wants to do but he’s also very open. He said, ‘Look, I’m not Palestinian. I’m not from there, that’s why I’m coming to you,” recounts Jacir.

“The date in the episode is based on a personal event of his own when he did pass through checkpoints to meet a girl. We talked a lot about that scene. Rasha is a great character,” says Jacir, noting the role is played by rising local actress Yara Jarrar.

“We discussed the idea of religious identity. It’s very important when Rasha says the situation is not about religion. For me, she speaks for most of us Palestinians in that scene, and the fact that what is happening here is about land and absolutely not about religion,” she explains. 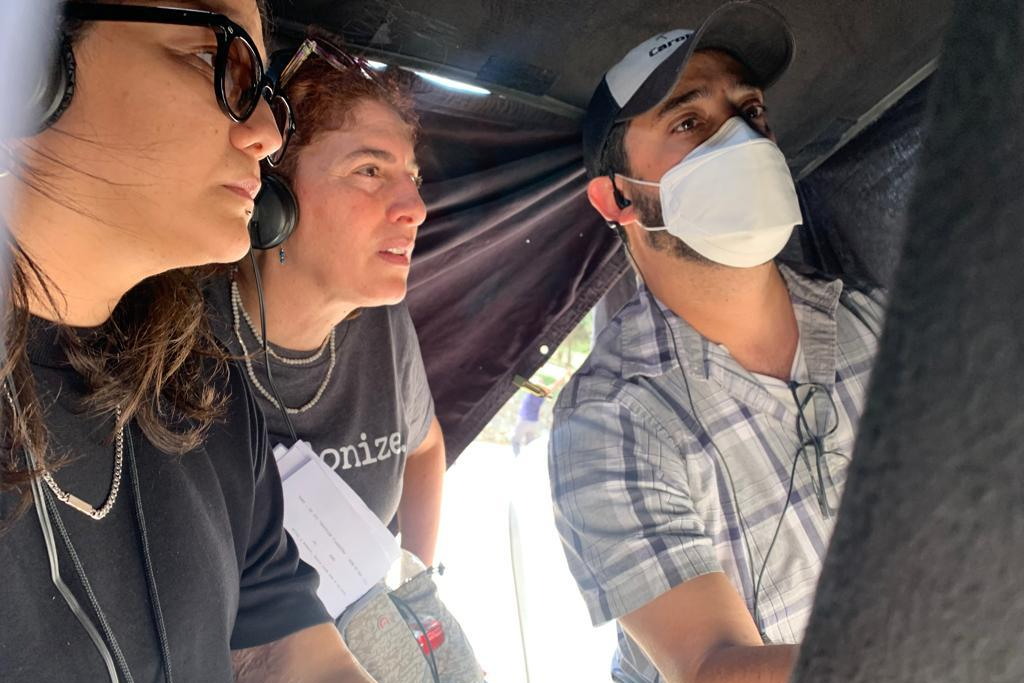 One key non-negotiable ground rule for Jacir is that none of her crew members be current or recent members of the Israeli army.

“I work in a very specific way here. I have my own Palestinian crew here. There are a lot of things that are not OK for me. There is a military occupation here. I don’t participate in government-sponsored things. I don’t want to have a set where there are people serving in the army,” she explains.

“This is a live military occupation. It’s not something of the past, it’s something of now and things are very tense here,” she continues.  “To have a film set where you have crew members who are Israeli, and who are in the army or have just served in the army, on one side, and Palestinians, on the other, that’s not a normal way to work for me. Our house (Dar Yusuf Nasri Jacir) was ransacked by the Israeli army less than a year ago. I can’t work with a crew, where I think one of them could have been involved.”

Jacir emphasized she is not categorically against working with Israelis, noting the presence of Israelis on debut feature Salt Of This Sea.

Ramy is also available to Middle East and North African audiences via OSN+. Jacir reveals she has had different reactions from different Palestinian communities to the show.

Palestinian friends in the U.S., she recounts, have expressed discomfort at some of the scenes in the episode.

“I had some feedback from people saying maybe the show needs a trigger warning. I said, ‘What do you mean by that?’ They replied, ‘For us Palestinians, it’s really disturbing to see that kind of violence on screen, to see kids getting arrested’,” recounts Jacir.

“I found that interesting. For me, the violence I experience here in its various degrees, from its very mundane forms to the really violent situations that I have been trapped in, I find it really important to make work about it and to talk about it,” she continues.

The scene in which a Palestinian teenager is bundled off by an Israeli army patrol unit touches on the sensitive issue of child arrests by the Israeli army and their detention in adult jails. Jacir refutes a suggestion the scene trivializes the phenomenon.

“If you watch to the end of the season, you’ll see it’s not making light of it. It’s drawing attention to what is going on,” she says.

“The two young actors, who play the (arrested) boy, and his friend, are from Jenin. I know they feel like me. They’ve had their friends arrested in that way. They could be arrested like that any day. Nobody’s safe. It’s very personal for them. They’re very proud of the fact that they’ve been able to tell that story.”

In terms of the actual shoot, Jacir says the process was not radically different for the crew from working on a feature.

“We’ve done many co-productions over the years, so we’re used to working with international crews who come in for a short period to shoot with us. What was different for me, was that Ramy was the showrunner.  He’s the creator of the show and ultimately all the creative decisions were his, not mine. In TV, the director is more a technician like any other crew member,” she says.

The speed at which the episode was shot was also an eye-opener for the director, who admits to liking to take her time.

“The episode is around 30 minutes. My director’s cut came in at 43 minutes and we shot that in five days,” she says.  “That is insane. I normally take six weeks to shoot an hour and a half. I prefer a slower pace. I also really like rehearsals. I really need that time and I enjoy that time. And I feel like a lot comes out of that time.”

Jacir reveals she would love to work with the Ramy team again if the show returns to the Middle East in future seasons but admits her first love remains cinema.

“I love that team. I love them. I love how they worked. I love the collaboration. If they came back with another episode and I love the episode, definitely I would do it,” she said.

“I’m a feature film person but I’m not closed to TV. If there is something, I feel I can make mine, that feels close to me, I would definitely do it,” she adds.

“Of course, TV, and streaming bring a bigger audience, but there’s nothing as satisfying to me as being in a cinema and watching films with people and seeing something on a big screen. The pace of that and the experience of watching something as a collective. I don’t think anything can replace that.”