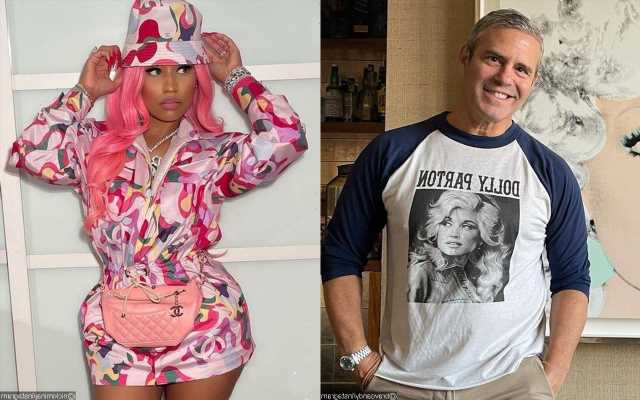 In a new interview, the Bravo executive producer reveals that while the ‘Anaconda’ femcee is clearly joking, he is open to have the rapper on the show’s season 6 reunion.

AceShowbiz –Andy Cohen has clarified reports that Nicki Minaj will be replacing him as the host in “The Real Housewives of Potomac” reunion special. In an interview with Entertainment Tonight, the Bravo executive producer addressed the female emcee’s playful remarks about hosting season 6 reunion of the show.

In the interview, Andy revealed that while Nicki was clearly joking, he was open to have the rapper on the reunion. “I would love to figure out a way to work her into the reunion and I would love to be able to bring her out and see what she has to say and wants to ask the women,” he shared.

“It could be a fun little new segment,” Andy assumed. “The answer is I’m totally receptive to figuring out how to work her into what we’re doing.”

Nicki claimed that she landed the hosting gig as she shared a text exchange between herself and her publicist. “Andy Cohen said he would gladly give up his seat to have you host the Potomac reunion. Tapes around October,” her publicist wrote to the “Anaconda” hitmaker. To that, Nicki responded, “Don’t move! Everyone binge watch all the episodes cuz we finna get into some thangz hunty. My questions will be well thought out, too. Mixed with funny and epic, of course (sic).”

In the post, Nicki also updated fans on her next album on Instagram. “plz don’t send me a million comments about the album and doc chile just lemme have my moment. We almost there. Promise. Not lying this time. Love you (sic),” the new mom said.

Prior to announcing the hosting gig, Nicki Minaj engaged in a light-hearted banter with some of the “Real Housewives” stars on Instagram. She wrote in one of her posts, “(Let me know) what y’all want me to ask chile,” and that prompted some Bravo reality TV stars to leave comments on the post.

Karen Huger commented, “All right now” with a fire emoji, to which the femcee replied, “Yes ma’am. I know a thing or 2 about being the Grand Dame.” Wendy Osefo, meanwhile, exclaimed, “Yessssss Queen.” To that, the rapper answered, “(I)t’s givin the most iconic reunion of awl time chi.”