Good Morning Britain often sees Andi hosting the competition segments of the breakfast programme and today saw him promise to make one lucky viewer a prize winner on-air. He explained the ITV show would be giving away £3,000 as well as an iPad. The host broadcast live from his garage this morning but Alex couldn’t resist making a comment about the interior, which led Andi to respond: “End of segment, slide me out please!”

As ever, Andi was on competition duties, revealing he would be making someone a cash winner live this morning.

Andi told viewers: “I’ll be calling somebody to tell them that they’ve won £3,000 and an iPad, the money will be in your account today.

“You must answer within three rings or I move on to the next caller,” with Alex teasing him: “That is so, so cold!

“I can’t believe it, I think it should be four rings but we’ll go with three today,” said the host, with Andi pleading: “Let’s not start a debate.” 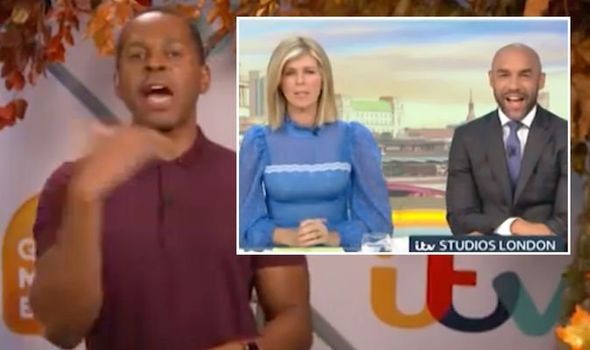 Kate Garraway weighed in, saying: “You’d need to put your phone on some sort of strap or tie, make sure your phone isn’t on silent.”

But as the hosts continued to discuss the competition, Alex couldn’t help but make a joke at Andi’s expense.

He said: “Also, all the stuff that’s in Andi’s garage is real, he lives quite near Richmond Park – I’m just wondering if there’s a tree missing, Andi?”

Andi burst into laughter but seconds later, he jokingly cut off his segment.