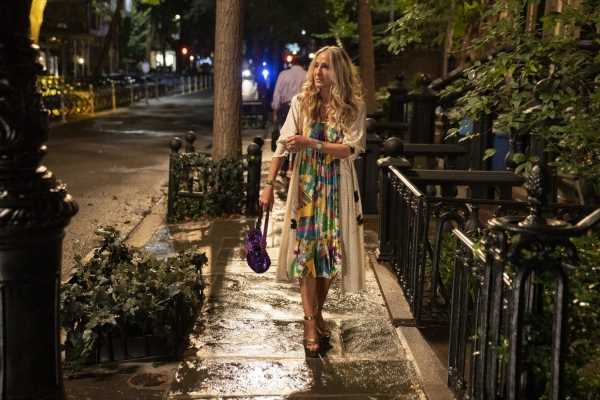 Sex and the City fans know just how much Carrie Bradshaw loves her shoes. She has worn some stunning pairs during the franchise’s six-season run, two movies, and now the HBO Max reboot. While Carrie’s main obsession is her heels, she is also fond of high-end handbags. In season 3 of the original series, she had one of her Fendi bags stolen. That same handbag reappeared in And Just Like That… leading fans to question how the sex columnist got her purse back. While it may be a plot hole, two workable theories could explain how she got the coveted baguette back in her hands.

Sex and the City rarely shied away from portraying the negative things that can happen in a large city. In season 3, Carrie was robbed of her shoes and her handbag when she happened down a street she didn’t know well. She was so stunned that she reminded her armed robber that she was carrying a baguette and not a bag.

Carrie was devastated to lose her purse and her Manolo Blahniks. Fans didn’t forget the purple, sequined Fendi baguette, either. When it popped up on Carrie’s shoulder in And Just Like That… fans had questions. We have a couple of theories that could make it all make sense.

The reappearance of Carrie Bradshaw’s Fendi bag in And Just Like That… certainly deserves an explanation. Since the show’s writers didn’t offer one, fans could easily theorize that the police found Carrie’s bag and returned it to her.

Sure, it’s a long shot, but it’s possible that the police did work on Carrie’s case and happened upon the bag. If the robber pawned the bag, it makes it more likely that the bag could make its way back to Carrie. According to regulations, New York City pawnbrokers must verify that items they sell or hold as collateral for a loan are not stolen. Since Carrie filed a police report, the bag’s description would have been on file.

According to Harper’s Bazaar, Fendi partnered with Sarah Jessica Parker to craft baguettes to celebrate And Just Like That… The iconic designer re-released two baguettes in honor of the series. Parker’s character sported both of them. One was the stolen Fendi design from season 3. Fendi also released a pink sequined baguette that Carrie carried in episode 9 of And Just Like That…