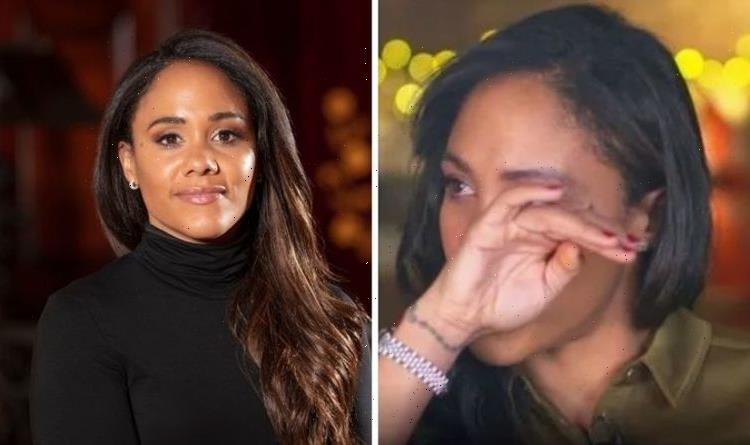 The One Show: Alex Scott says Jermaine was 'made to change'

Former professional footballer-turned-presenter Alex, 37, will appear in tonight’s episode of BBC’s Who Do You Think You Are? While looking into her family’s past, the sportswoman discovers a relative of hers was kept in an asylum in London until he died, despite his wife’s several attempts to get him out of it. Alex becomes emotional as she explained why his story resonated with her.

During the episode of the BBC programme, Alex found out her great grandfather Philip had an older brother, Abraham.

He ended up living in the former Colney Hatch Lunatic Asylum, and the football pundit delved into his story with the help of a historian.

“I found out that Abraham was here,” she told expert Vicki Long.

“And then straight away I think asylum and then you think the worst.”

Vicki replied: “I thought we could maybe take a look at the photo we have here.”

The historian showed Alex a photograph of Abraham with his wife, Annie.

“How smart he looks,” the former Arsenal player commented.

“It’s a gorgeous photo,” Vicki stated, adding: “What we have behind that is another photo of Abraham, when he is admitted here as a patient.”

“There you have someone who seems very strong, very together, and here I’m looking at the next photo, someone sad in the eyes and I feel, lost,” Alex explained.

“What’s the journey from seeing him like this to this?” Alex asked.

Vicki explained that Abraham was admitted to the asylum in 1934 at the age of 41.

Reading from the case notes, Alex said: “He talks to imaginary people, and he says he hears voices telling him that his wife is not faithful to him and he has threatened her, he is frightened of the way he looks at her. He has been depressed for some time… wow.”

Vicki went on: “When he’s admitted in 1934, it’s right at the peak of the interwar depression. He’s looking round in a world where there probably aren’t many employment opportunities.”

“[It says] he was watched by neighbours – wow, everyone around him’s seeing these behaviours,” Alex observed.

Vicky continued: “Yes, and when the case notes talk about delusions of persecution, that might reflect some of his lived experience.

“It seems quite likely that he will have encountered a fair amount of antisemitic prejudice because Oswald Mosley’s British Union of Fascists are pretty active at that point in time.

“There’s quite an interesting entry towards the bottom.”

Alex read: “Application made today through the subcommittee by wife for his discharge, and it was refused.”

Vicki revealed that Annie tried five times to petition the hospital to discharge her husband, and was refused every time.

Abraham ended up dying in the asylum in 1963.

An emotional Alex said: “The sad part about it is his wife tried to get him out, he didn’t have to spend all those years here.

“Reading everything he suffered in there saddens me.

“There was an instant connection resonating with me about my mental health issues and depression.

“It’s really a mixture of the sadness but actually I’m so happy now that I know the history and feel a connection to a side of my family that I never knew,” an emotional Alex went on as tears began to flow.

Who Do You Think You Are? airs tonight on BBC One at 9pm.