The evolution of the human race concluded on Wednesday with the mind-blowing finale of American Horror Story: Double Feature, an hour as rich in gore and twists as it was in stunning, timeless kaftans. And if that isn’t this entire franchise in a nutshell, what is?

The fourth and final “Death Valley” installment began in 1972, with Nixon’s presidency in shambles as the American people demanded an end to the Vietnam War. The president’s trusty advisor Valiant Thor reminded him that the war was merely a temporary distraction to keep the public from noticing how many Americans were being abducted. “Distractions can come in many forms,” he explained, promising that he has a “full menu of distractions” planned leading up to the first successful alien-human hybrid, which was expected to be born in 2021.

Eager to remove Nixon from office and keep him quiet — but not looking to sully their hands with a messy assassination — Mamie and Valiant conspired to have him impeached, with Ike’s widow slipping some Watergate intel to a young reporter named Bob Woodward under the alias Deep Throat. (“It’s from that filthy movie,” she told Valiant. “I figured it’s the last name anyone would believe I’d take.”) But even the threat of a trial wasn’t enough to make Nixon back down, so Valiant intervened by giving the president a “simple medical procedure.” You or I might have used the word “probe,” but who are we to question the alien’s mysterious ways?

Mamie was successful in getting Nixon to resign, but her ultimate mission was far from over — and we’re not talking about her passion project of making Evacuation Day happen. “It’s time for another dignified exit from the stage,” she announced, which came seven years later when news of her “death” was reported nationwide. In reality, she would live on in the bowels of Area 51, where she would celebrate the next 42 birthdays with her new bestie Calico.

Then came 2021, and everything changed. Following Cal and Troy’s brutal deaths at the hands (and tentacles) of Cal’s alien spawn, Kendall and Jamie were informed that one of their babies was predetermined to be the perfect specimen. Like the universe’s most effed up game show, both contestants — er, expectant mothers — immediately went into labor, with Jamie and her baby getting… the chop. Kendall’s baby, on the other hand, was the big winner. “This child is creation!” Angelica Ross’ character (apparently named Theta) exclaimed upon her birth. Unfortunately, Theta didn’t hold the child’s mother in quite as high regard, especially when she started paraphrasing Shakespeare at her. So Theta put in a simple IT request for Kendall’s head to be removed, turning her into nothing more than the “perfect breeding machine.” 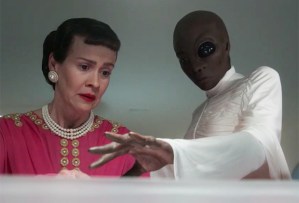 News of Kendall’s bug-eyed messiah quickly spread throughout Area 51, as did concerns about the aliens’ plans for their now-obsolete vessels. And Theta did nothing to ease Mamie’s concerns by revealing that the aliens intended to wipe out the remains of the human race in order to restore balance. As for the “other” alien race, the reptilians that Ike had spoken of before he died, Valiant explained that they have every intention of sharing the planet with them; despite being “cold blooded and hideous,” at least the reptilians have technology and resources that they need, rendering humans virtually useless.

Desperate to keep Valiant’s plan from coming to fruition, Mamie enlisted Calico for a risky revolution, all the while believing they had Theta’s blessing in murdering Kendall’s baby. “An immoral act becomes moral when it’s done in the service of all humanity,” Mamie — sorry, make that “Mamie God Damn Eisenhower!” — told herself as she lowered the scalpel. That’s when Theta dropped the act, freezing Mamie in place, reading her to filth with a speech about how humans are too selfish to share anything, and splattering her brains all over the wall.

The episode then reached a curiously abrupt conclusion as Calico helped Theta deliver the next perfect specimen. And we love that for her.

Were you satisfied by the “Death Valley” finale? Grade the episode, as well as Part 2 of AHS: Double Feature overall, in our polls below, then drop a comment with your full review.