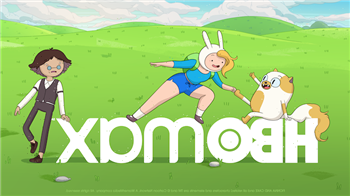 The latest in HBO Max’s Adventure Time spin-offs is going to be large. So very large. The streamer has announced that the gender-swapped Ice King fan fiction is becoming its own entity with the working title Adventure Time: Fionna & Cake, and the cherry on top is this is not going to be just another one-off like the four previous Distant Lands spin-offs. Yes, Fionna and her magical cat companion Cake have landed a ten-episode half-hour series commitment!

For those only vaguely aware, the characters Fionna (voiced by Californication‘s Madeleine Martin) and Cake the cat (voiced by Roz Ryan of Disney’s Hercules fame) made their debut almost exactly a decade ago in their own self-titled 2011 installment of Adventure Time‘s third season. Yes, it only took three seasons for the show to start parodying itself. As depicted, they were alternate female counterparts to series leads Finn and Jake, yet had their own distinctly girl power traits.

Like Finn’s pining over Princess Bubblegum, Fionna had a thing for Prince Gumball (Neil Patrick Harris), while Cake’s stretch-and-squash powers mirror those of Jake but with a more maternal “you go girl” personality. Of course, at the end of the episode, it was revealed that these characters are just some twisted fan fic created by the Ice King to read aloud, seeking a captive Finn and Jake’s approval. At the time the “Fionna and Cake” episode was the highest-rated of the series, spawning critical raves and fan favs. The characters were reprised in four further episodes and even their own kaBOOM comic book Adventure Time with Fionna and Cake.

A League of Their Own

Unlike previous fan fictions that wound up getting real adaptations (hello, Fifty Shades of Grey), Fionna and Cake hold the distinction of being interworld fanfic invented by the actual show creators, including mastermind Pendleton Ward. In fact, Rebecca Sugar of Steven Universe fame was one of the co-writers of the original episode. The other co-writer, Adam Muto, eventually became Adventure Time’s executive producer and showrunner. Muto will take the same posts on Adventure Time: Fionna & Cake.

According to the press release, the show will involve the girl warrior and her trusty cat sidekick teaming up with Simon Petrikov (the former Ice King reverted to his former self in the original series finale) to go on a jaunt through the multiverse on a journey of self-discovery… all while simultaneously having their entire existence threatened by a mysterious antagonist lurking in the shadows. Based on that synopses, it would seem that this new series may have a lot of meta threads involving two characters teaming up with their creator, which sounds both rad and very in keeping with the subversive spirit of the show.

“‘Adventure Time’ broke boundaries and was a shining example of how impactful animated storytelling can be. We are excited to partner with HBO Max to carry that tradition on to new heights, lands and magical worlds.”

Whether these initial 10 installments of Fionna & Cake will be a limited run or a continuing series to rival Adventure Time’s 283 episodes remains to be seen, but one would imagine that will all come down to how many young/hipster eyeballs will stream these bad boys. As a father with an Adventure Time-loving tot, I can tell you that “Fionna and Cake” is a great gateway episode of the series for little girls, and it seems the powers that be at HBO Max think they will garner a whole new generation with them.