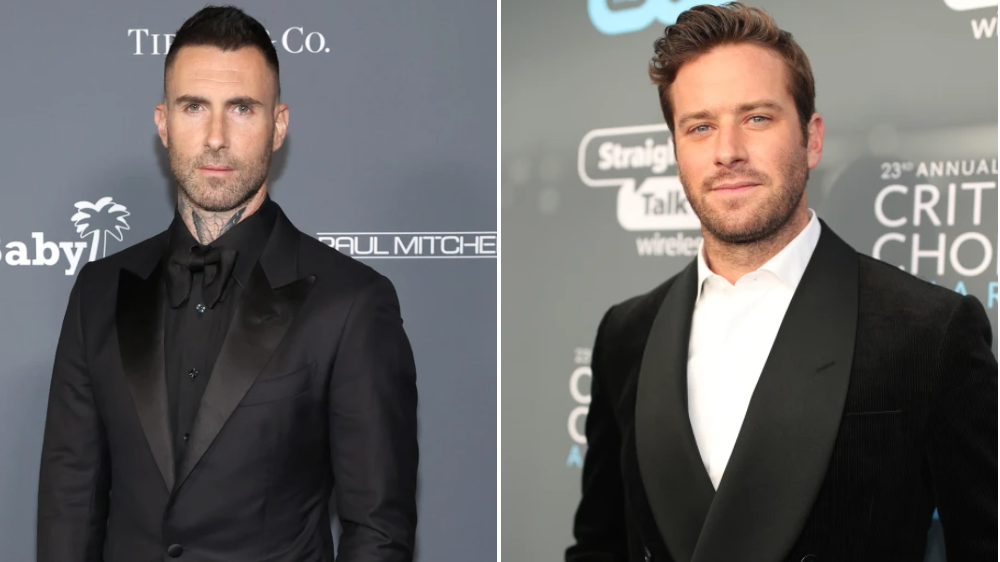 Adam Levine and Armie Hammer were both torn apart on Saturday Night Live following the their respective sex scandals.

The Maroon 5 singer, 43, was accused of having an affair with Instagram model Summer Stroh who claimed Levine wanted to name his third baby with wife Behati Prinsloo after her.

Stroh shared flirty texts from Levine which have since gone viral, and were the biggest butt of the joke during Miles Teller’s edition of SNL.

Teller appeared as a game show host with comics Micky Day and James Austin Johnson playing Levine and Hammer respectively as contestants in a game called Send Something Normal.

‘The game is very simple. We have four male celebrity contestants, and all they have to do is reply to a woman’s DM on Instagram in a way that is normal,’ explained Teller.

Levine, played by Day, was asked to respond a DM that read: ‘Hey, Adam, huge fan. Love your music.’

‘OK. Tough call,’ Day replied. ‘Can I see her most liked vacation photo’

After seeing the pic, he had his answer: ‘All right. Going to kick things off with a “Holy moly!”

‘But I got three more, though. “Holy moly! Holy c**p! Your body is making my penis smile.”’

Hammer, who has repeatedly denied allegations of sexual misconduct and cannibalism, played by Johnson was asked to respond to another very normal DM: ‘Hey, Armie, hope you’re doing okay.’

‘Alright, look, I know there’s been a lot of talk about me in the press, but I’ve done a lot of work on myself, and I’ve changed. So I have my message… I want to break open your bones and suck out the marrow.”’

Branden Gleeson will host Saturday Night Live on October 8 while Megan Thee Stallion will host and perform the following weekend.