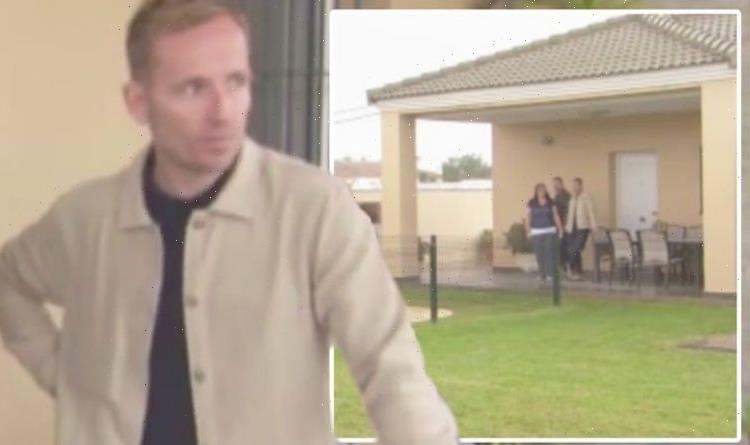 A Place in the Sun: Jonnie Irwin thanks guests for compliment

Steve and Janice were the two A Place in the Sun guests looking for their dream property in Costa de Luz, Spain during Wednesday’s rerun. Jonnie Irwin was the property expert tasked with finding them the perfect candidate and with £160,000 to play with, he had ample cash to tick off the pair’s extensive checklist of requirements. However, at the very first property, Jonnie, Steve and Janice were forced to take cover when the heavens opened, meaning they couldn’t fully explore the garden.

The first property was a three-bed villa in Chiclana de la Frontera, on the market for around £145,000.

“My first impression is I think I like it,” Janice said as Jonnie welcomed her and her other half into the modern kitchen first of all.

And Steve echoed Janice’s optimism, admitting he was “pleasantly” surprised by the modern interior, spacious bathroom and separate pool.

However, as they reconvened outside with the A Place in the Sun host to go through their thoughts, the trio took cover as the heavens opened.

With the cameras showing the pool and shed covered by water, it soon became clear Janice and Steve’s exploration of the property would stop there.

Nevertheless, Jonnie seemed optimistic about the reception to property number one, telling Channel 4 viewers: “Well, it’s all sounding really positive for this town villa on the market for just over £145,000.

“And I can’t wait to hear their thoughts,” Jonnie’s voiceover added before the camera cut to the three of them sheltered outside.

“I apologise,” Jonnie said as he gestured towards the rain hammering down on the garden. “But someone’s turned the taps on.”

But the rain didn’t dampen Steve and Janice’s spirits as they both admitted they liked the house.

So much so, the two branded it a “contender” and a possibility for an offer to be made.

Jokingly hitting back at Janice’s comment, Jonnie quipped back: “Thank you for the vote of confidence.”

However, property number one wasn’t the one Janice and Steve opted to make an offer for as the fourth option won the hearts of them both.

So much so, the pair even broke down in tears when they first saw the pool of a garden villa on the market for around £145,000.

“Since we walked through those gates, I just felt completely at calm,” Janice said of the property at the negotiation stage.

However, Jonnie did point out there was a bit of work to be done to the property – but it didn’t put off Janice and Steve.

They submitted an offer of £143,000 for the property which Jonnie relayed to the owner.

And after a nervous wait, the estate agent called back to confirm they’d landed the three-bedroom property – but only if they’d up their offer to £143,500.

A Place in the Sun airs weekdays at 3pm on Channel 4.