90 Day Fiancé star Nicole Nafziger can’t catch a break with fans of the popular TLC series. After receiving criticism for months because she was in Morocco with fiancé Azan Tefou, Nicole finally returned home to Florida to be with her five-year-old daughter, May. Now, fans are claiming that Nicole put her daughter’s life in danger.

Nicole saved every dollar she could from her Starbucks paycheck and headed to Morocco to visit Azan in early March. She was supposed to stay for two weeks, so she left May in Florida with her mom, Robbalee.

However, the COVID-19 pandemic hit just days after she arrived in North Africa, and Nicole’s trip lasted a lot longer than she had planned. She claimed she couldn’t get out of the country because of Morocco’s international travel ban.

The U.S. Embassy was offering special flights for Americans to get home that didn’t have to be paid for upfront. But Nicole remained in Morocco with Azan for five months, and that caused serious backlash from fans.

They were convinced that she had abandoned May and had chosen a man over her daughter.

On Sunday, August 9, the 26-year-old told her 641K Instagram followers that she was finally flying home to see May. According to ScreenRant, Nicole documented her trip to the airport in her Instagram Story with Azan by her side.

Nicole Nafziger has finally reunited with her daughter

After five months away from May, Nicole finally returned home to Bradenton, Florida on Monday, August 10 and reunited with her daughter.

It’s clear that Nicole is happy to be home with May, and the mother-daughter duo appear to be spending every minute together. Nicole has already posted a number of pics and videos of the five-year-old since her return to America.

“May helping make my eggs this morning,” wrote Nicole in the caption of a video.

Loving this mask my mom @srqquilters made for me. She gave it to me as soon as I she saw me in the airport haha♥️ May loves her Minnie Mouse one too😍 #masks #mask

Another post featured May brushing her mom’s hair. May also modeled a souvenir that her mom brought home – a pink t-shirt that read “I ♡ Morocco,” complete with a cartoon camel.

Despite accusations from fans that Nicole “abandoned” her daughter, Robbalee has made it clear that’s not the case.

“There was no abandonment,” Robbalee said last month. “[May] is getting to spend time with her grandparents while her mommy is away. There is a lot more to this story than a simple answer.”

After fans begged her for months to return home to her daughter, Nicole finally flew back to Florida. Still, many fans are not happy.

This time around, Nicole angered fans by choosing to reunite with her daughter at the airport when she got off the plane. She shared a selfie of the sweet moment and wrote in the caption that she was so happy to be home with her baby girl.

The issue — according to her many critics — is that Nicole didn’t quarantine for two weeks after traveling internationally. Comments came pouring in about how COVID cases in children have gone up and Nicole should be worried about endangering her child.

My sister just gave birth to her first born baby, Adrianna😍😍😍😍 I am so in love with this little baby! Just gives me so many memories of May when she was just born 🥰🥰🥰😍😍😍♥️ #babyfever

“Don’t you think quarantining yourself for an appropriate amount of time first would’ve been the responsible thing to do?” wrote one critic. While another added, “Abandons daughter for six months then hugs all over her after being in four different airports lmao mom of the year over here.”

Fans also took aim at Nicole after she posted a photo with her brand new niece. In the photo, she is holding the newborn extremely close and is not wearing a mask. 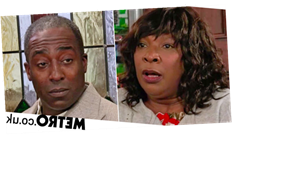 Ronnie Bailey (Vinta Morgan) made his highly-anticipated arrival in Coronation Street tonight (February 19), but it appears as if he...