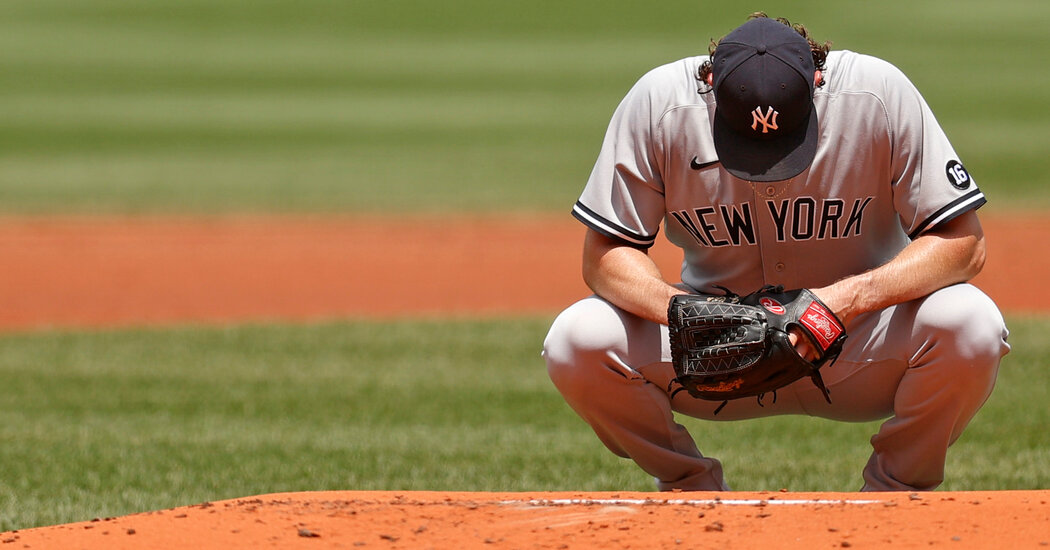 BOSTON — The Yankees start almost every Monday with jackhammers pounding their skulls. Their hangovers are not from weekends of revelry, but from binges of shame and regret.

It happened again this weekend, at a festive Fenway Park hosting overflow crowds with a dash of celebrities — the retired wrestler Ric Flair on Friday night, the actor Jon Hamm on Saturday night and the comedian Will Ferrell on Sunday afternoon. Pick your analogy: The Yankees were flattened in the ring, fell from a skyscraper, booted from the anchorman chair.

The last loss was the worst, a 9-2 thrashing by the Red Sox on Sunday that shoved the Yankees into fourth place in the American League East. Starter Gerrit Cole allowed a home run on the first pitch he threw, and seven innings later, reliever Brooks Kriske did the same. The first-place Red Sox fit two homers and a whole lot of havoc in between.

For the Yankees, it was the fourth weekend in five without a victory. In consecutive weekends they were swept in Detroit, swept at home by Boston and swept (in two games) in Philadelphia. They took two of three against Oakland last weekend — aided by a series-ending triple play — before this.

“We’ve got to find a way,” Yankees Manager Aaron Boone said. “The inconsistency of two steps forward, come up here in a big weekend series and take a giant step back — that inconsistency has kind of defined us so far, and we’ve got to find a way to be more consistent. Ultimately we expect way more out of ourselves. I know the fan base expects more.”

Cole allowed six runs — his high as a Yankee — as Kiké Hernandez, Rafael Devers and J.D. Martinez took him deep. Cole has had two rough starts and three strong ones since Major League Baseball announced that it would punish players for using sticky substances to enhance the spin rate on their pitches. On Sunday, Cole said his location was off.

“I think everybody was well aware of the importance of the game,” Cole said. “It’s a pretty brutal feeling to let the team down like that.” 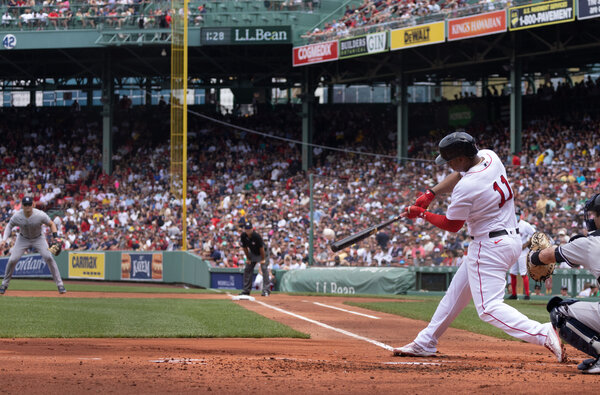 The way the Yankees have hit lately, the game was all but over after Boston’s four-run first inning. The Yankees fanned 13 times on Sunday and scored only with a homer — a two-run blast onto Lansdowne Street by Aaron Judge in the sixth.

The next inning, when Judge came up with the bases loaded and two out against Garrett Whitlock, a former Yankees farmhand lost in the Rule 5 draft, he popped out to second. So often for this offense, it is all or nothing.

“We’ve just got to find a way to scrape together some runs,” the Yankees’ Zack Britton said before the game. “You always talk about being able to win a game a bunch of different ways, and I think we’ve got to get back to trying to do that, trying to fight and claw for any win. It might not look pretty that day — you might not hit a home run, you might not be doing anything crazy, you might be scoring on an error and making the defense work. We’ve just got to find a different way of winning right now, and I think we can.”

Britton is a relief pitcher — he hurt his hamstring Friday and was placed on the injured list — but his point resonates. It is astounding that only the rebuilding Baltimore Orioles and Detroit Tigers have scored fewer runs per game than the Yankees, who are averaging 3.99. The Red Sox are averaging 5.01. They are imposing again after the best-timed flop in baseball history.

The Red Sox limped to a .400 winning percentage last season, earning the fourth overall choice in next month’s First-Year Player Draft. It is their highest pick since 1967, and perhaps they will use it on a future ace like the right-handers Jack Leiter or Kumar Rocker of Vanderbilt, quite a reward for two months of bad baseball in a pandemic with no fans to watch in person.

The 2020 Yankees had their typical outcome of the last two decades: a strong regular season that dissolves in the playoffs. With a 40-37 record now, they may not even get that far. As the halfway point of the 162-game schedule arrives this week, at least seven A.L. teams have better records than the Yankees.

“We’re in the toughest division in baseball with some really good teams that are ahead of us in the standings,” Boone said. “We’ve got to dig ourselves out and we’ve got to be more consistent and we’ve got to keep our foot on the gas, especially now as we start an important homestand.”

Of course, when you floor the gas pedal while stuck in a hole, all you do is spin your wheels. The Yankees are familiar with that routine: They came to Boston having won seven of nine games, and after the sweep, their assignment only gets tougher. Shohei Ohtani, in full bloom at last as a two-way star, will pitch for the Los Angeles Angels on Wednesday in the Bronx.

“That was kind of almost my trade, because I got traded over here with international signing bonus money, and I know that it was because the Yankees were really pushing for him,” said Michael King, who was traded from Miami to the Yankees, with $250,000, in 2017. “It would have been sweet to have that guy as a teammate.”

King will start for the Yankees on Monday, hoping for his first victory in the role. In nine career starts, he is 0-4 with a 6.82 earned run average. Barring a trade, though, King is the Yankees’ best option in the No. 5 spot, with Corey Kluber most likely out until September with a shoulder injury, Luis Severino recovering from both Tommy John surgery and a groin strain and Deivi Garcia struggling in the minors.

Between Cole and King in the rotation are Jameson Taillon, Domingo German and Jordan Montgomery, who have combined to go 9-11 with a 4.47 E.R.A. in roughly 220 innings. They have pitched, collectively, like an average No. 4 starter.

To win with that kind of rotation, you have to bludgeon opponents. But for now it’s the other way around — and the Yankees seem to have a glass jaw.