MELBOURNE, Australia — To show a fuller picture of the sport, women’s tennis is shining the spotlight on the coaches who travel the tour with its players.

For 10 years, the WTA has allowed on-court coaching at regular tour events. At this year’s Australian Open, coaches have given news conferences of their own, following their players to the podium after matches. Last season, for the first time, the WTA awarded a Coach of the Year Award, which went to Naomi Osaka’s coach, Sascha Bajin.

But nothing drew more attention to tennis coaches than one getting in trouble. Coaching during a match is not allowed at Grand Slam tournaments, and Serena Williams was assessed a code violation in the women’s final at the United States Open in September when the chair umpire, Carlos Ramos, spotted her coach, Patrick Mouratoglou, gesturing toward her from his seat. His hand movements were replayed as much as any shot from the tournament.

Williams’s ire over the penalty, which she felt was akin to calling her a cheater, set off a series of penalties that overshadowed the match, which was won by Osaka.

Afterward, Mouratoglou admitted to making the signals, but added, “Everyone is doing it, 100 percent of the time.”

Four months later, at the Australian Open, he continued to insist that the rules should change because coaching from the stands is already “completely tolerated — except for one or two people who think they’re different.”

Ramos is officiating matches at this tournament, but he was not assigned to one featuring Williams, who lost in the quarterfinals on Wednesday. At least one prominent player — the men’s semifinalist Stefanos Tsitsipas — has been cited for illegal coaching in Melbourne. 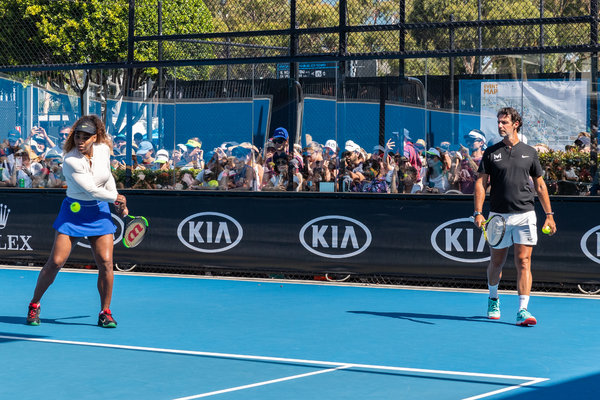 “I think it should become legal because we stop hypocrisy, first of all,” Mouratoglou said. “Second, because it’s great for the show, and we want to have viewers who are not 50 years old. We want to attract the young generation, and we’re not. Tennis is not attracting the young people. And third, I think it’s good for the players.”

Despite the WTA’s calling for coaching to be allowed across the sport after the incident at the U.S. Open, neither the men’s tour nor the Grand Slam tournaments have moved in that direction.

Steve Simon, the WTA chief executive, said that coaches “contribute an integral element to the on-court and off-court WTA story.”

Simon’s predecessors have seen coaches as resources for enriching its product before. Allowing on-court coaching 10 years ago was motivated more by entertainment considerations than any desire for improving tactics.

Larry Scott, then the tour’s chief executive, said the rule change came from a desire for “being as fan-friendly as possible and being as responsive to television as possible without altering the fundamentals of the sport.”

Holding news conferences with coaches is part of an initiative by the tour’s communications manager, Chase Altieri, who came to the WTA in 2017 after working in the N.F.L., where coaches’ briefings have long been a feature of news media coverage.

WTA coaches have embraced the program, both for the chance to articulate their views and to ease the burden on their players. Bajin has made television appearances in lieu of Osaka to lighten her schedule of obligations during tournaments.

A new section of the WTA website includes profiles of the coaches, with details like their current and previous partnerships and off-court interests. Simon said the goal was to “bring our fans inside our sport.”

In recent years, the U.S. Open and the Australian Open have begun with allowing coaching during the qualifying rounds, with players able to walk to the side of the court where their coach is sitting during changeovers if they desire a consultation.

Mouratoglou is one of the strongest advocates for on-court coaching, even though his player never uses it. He said Williams’s sense of self-reliance was a weapon he would not dare muzzle.

“I think that her No. 1 quality is to be the best competitor ever, and I don’t want her to think that suddenly she needs someone to be a better competitor; that would make her weaker,” he said. “So, for me, it doesn’t make sense for someone like her.”

Mouratoglou, who has worked with Williams since 2012, owns a tennis academy that bears his name in France and has been a television analyst for ESPN and Eurosport. He said tennis had many untapped areas that could be mined for entertainment purposes.

“Coaching is part of the game,” he said. “If you show it, it’s an incredible adventure for the people to see.”

Before the Australian Open began, Mouratoglou even released a mobile game, Tennis Manager, which offers users the chance to simulate recruiting, training and strategizing with tennis players. Its slogan: “Shape a Champion; Become a Legend.”

Bajin, who worked alongside Mouratoglou for years when he was Williams’s hitting partner, comes down on the opposite side of the coaching debate, saying the rule should not be changed “to make it more interesting” to watch tennis.

“I think it takes away the purity that tennis was,” Bajin said. “My father put me out there on the court in order to become more independent, to learn how to handle problems, to learn how to be by myself, so that nobody can help me — and I think that still parents do that for their kids. That’s why they want them to start this sport, because it’s something special, and I wish we would keep it that way.”

But Bajin admitted that he, too, had occasionally tried to send illicit advice from the stands.

“Sometimes you try to sneak something by,” he said. “I’m guilty of that.”