ARSENAL fans were left worried after spotting talisman Pierre-Emerick Aubameyang taking medication on the sidelines during the defeat to Leicester.

The Gunners suffered a 1-0 reverse at home to the Foxes on Sunday thanks to a late strike from super-sub Jamie Vardy. 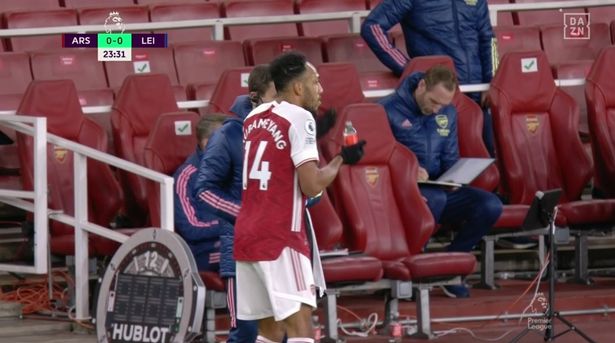 However, he has struggled for goals since in the Premier League and endured another frustrating night against their top four rivals.

But supporters had more than just his form to be concerned about in the 24th minute of the clash.

Aubameyang was seen talking to a member of the Arsenal backroom staff while taking what appeared to be medication with a drink.

And followers of the North London club quickly took to Twitter.

One concerned fan wrote: “Aubameyang needs rest. His output has also significantly reduced. He might be playing through an injury.”

As another added: “Aubameyang taking tablets for something… that’s a concern.”

But not everyone was worried, as another tweeted: “Aubameyang has been tested positive for being the best striker in the league and has been advised to take medicines.”

Aubameyang was able to continue to play the duration of the game with the problem still yet to be confirmed.

But the Gabon international has now not found the target in the top-flight since the opening day victory over Fulham.

And he has now gone five league matches without a goal for the first time since November 2014, his first season with Borussia Dortmund.