Tiger Woods finished the World Challenge on Sunday and headed to Australia to promote the Presidents Cup as the US captain.

It's the same schedule he faces next year, with one big difference. Woods will have 12 players with him, and he could be a playing captain. 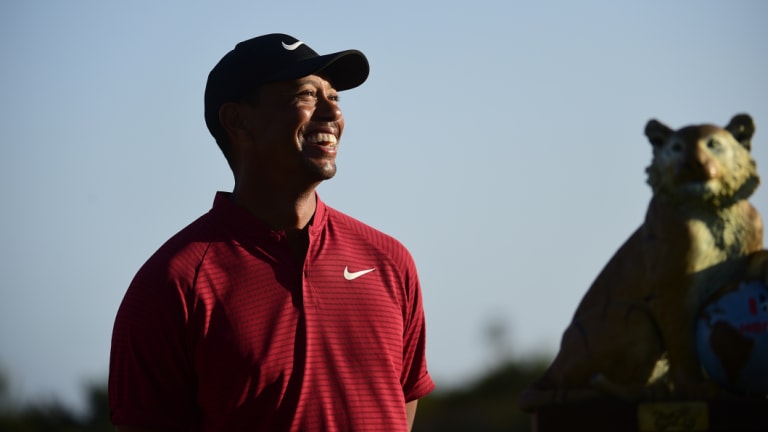 Busy: Tiger Woods has touched down in Australia hours after the finish of his Hero World Challenge tournament.Credit:AP

It leads to a messy schedule that could affect two tournaments – his unofficial World Challenge, an 18-man field of players from the top 50 in the world, and the Australian Open, which was hopeful of a strong field a week before the Presidents Cup at Royal Melbourne.

The Presidents Cup is December 12-15, the latest it has ever been played. Woods confirmed earlier in the week that the World Challenge would be played the week before. Beyond that, details remain unclear.

"There are so many things that are up in the air," Woods said after he closed with a one-over 73 and finished 17th out of 18 players.

"One of the logistical things I'm trying to figure out is try to get where there's like eight to 10 guys, plus four, five more … you're getting close to 50 people from the Bahamas to Australia in time for a practice round, opening ceremonies and the event. We have our work ahead of us trying to logistically try to make this all happen."

One person said the plan was to end the World Challenge on Saturday next year, possibly early in the afternoon. That would allow the American contingent – players, caddies, family – time to take a charter to Melbourne, arriving Monday morning.

Woods' agent Mark Steinberg said he hoped to have an announcement when Woods returned from Australia.

The Presidents Cup features an American team and an International team from everywhere but Europe. There were 12 Americans in the field this year in the Bahamas and two players who are regulars on the International team, Jason Day of Australia and Hideki Matsuyama of Japan.

The Presidents Cup was played at Royal Melbourne in 2011, and 13 players – including Woods – played the Australian Open the week before in Sydney.

Officials announced last month the Australian Open, the fifth-oldest championship in golf, will be played December 5-8 and organisers are excited about another strong field.

"This is great news for the Australian Open and we're excited about what this means for Australian golf fans," Golf Australia chief executive Stephen Pitt said.

Now there's a choice for Americans who are on the US team, and even some International players who live in America. Jordan Spieth, for example, already is a two-time winner of the Australian Open. He didn't play this year – or in the Bahamas – because he got married last weekend.

"The logistics are not great," Rickie Fowler said. "A lot depends on the captain and figuring out what we want to do as a team."

Dustin Johnson, among those who played the Australian Open in 2011, sounded as though he would be in the Bahamas next year. And he didn't sound terribly worried about the logistics.

"As long as I'm riding with Tiger, I'll be fine," Johnson said.