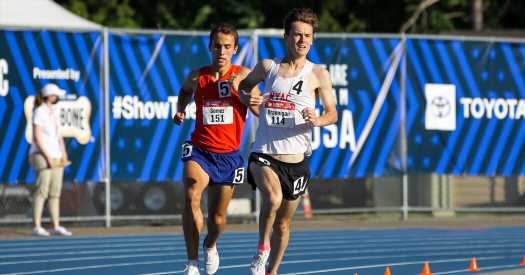 Mikey Brannigan, a gold medal-winning runner who is intellectually disabled, still remembers the stress and confusion of being lost in an airport.

In 2016, Brannigan had no one accompanying him as he flew to a team training camp ahead of the Rio Paralympics. Brannigan’s father, Kevin Brannigan, said his son missed his connection and didn’t find his way to another flight for hours.

“It was a lot harder because I flew by myself,” Mikey Brannigan said. “I felt bad that I missed my flight, and I was worried that I wouldn’t get to the California training in Chula Vista.”

Brannigan’s disquieting experience illustrates the kind of challenge many athletes with physical and intellectual disabilities encounter as they travel to compete. With the Tokyo Paralympics set to begin Aug. 24, some American athletes and their advocates, including members of Congress, are pointing to stories like his as they criticize the United States Olympic & Paralympic Committee for failing to provide what they consider necessary support.

“Athletes with disabilities are only able to compete at this level when they have access to the necessary supports and accommodations that they need to be successful,” Senator Maggie Hassan, Democrat of New Hampshire, wrote in a letter to the committee. “They should not be forced to navigate the Tokyo Olympics without the support that they need, particularly in the midst of a global pandemic.” The governor and the two U.S. senators from Maryland, the home state of the champion swimmer Becca Meyers, echoed Hassan’s concerns.

The issue is not new, but it gained new attention last month when Meyers, a three-time Paralympic gold medalist who is deaf and blind, removed herself from the United States Paralympic swimming roster because her mother, Maria, would not be allowed to accompany her in Tokyo. Maria Meyers has regularly traveled with the U.S. team to assist her daughter since Becca, 26, had a harrowing experience at the 2016 Games in Rio de Janeiro.

Meyers’s withdrawal on July 20, first reported by The Washington Post, was not a dramatic last-ditch attempt to win approval for her mother to travel to Tokyo. By then, Meyers said, she had accepted that she wouldn’t have the support she needed to swim in Tokyo and add to her collection of six Paralympic medals from London and Rio. Now she was pursuing a broader goal: raising awareness about the complications that elite athletes with disabilities routinely face and pressing for better accommodations for their needs.

“I’m speaking up to spark a conversation so that we can effect change and protect future generations,” Meyers said in an interview. “No one should ever feel afraid on Team U.S.A.”

Other American Paralympians, past and present, and their families responded to Meyers’s announcement by describing their own difficulties getting sufficient resources to compete safely at an elite level. Logistics at the Games are particularly challenging this year because of the coronavirus pandemic, which has led to a ban on international spectators and restrictions on the size of each country’s delegation. But the Paralympians said the U.S.O.P.C.’s support of athletes with disabilities was lacking before the pandemic.

The U.S.O.P.C. said in a statement, “Our goal is to ensure all athletes are supported within our staff structure.”

Some athletes say that staff structure can leave substantial gaps in support.

Hannah McFadden, a two-time U.S. Paralympic wheelchair racer, said that she and her sister Tatyana McFadden, a five-time Paralympian, follow a routine when flying home from international competitions. They wait after they deplane to make sure that their visually impaired teammates have someone to guide them to a connecting gate. If not, the McFaddens help.

“A lot of times we’ll have visually impaired athletes traveling by themselves in hopes they meet up with a teammate, so it gets a little crazy,” Hannah McFadden said.

The U.S.O.P.C. has cited the restrictions on the size of national delegations as the reason for denying Maria Meyers a spot on the team traveling to the Paralympics.

Yet many of Becca Meyers’s supporters have noted that the restrictions have not forced Olympic golfers to play without caddies or equestrian competitors to make do without grooms to tend to their horses. The disparity in defining essential personnel, Meyers and other Paralympians said, reflects a persistent misunderstanding of what constitutes equitable treatment of disabled athletes.

Linda Mastandrea, a disability legal expert who is a past Paralympic wheelchair racer, questioned whether athletes like Brannigan and Meyers were getting what they needed to be safe and thrive according to disability accommodation laws.

“Becca and athletes like her require personal assistant services,” Mastandrea said. “It’s a tool that allows them to compete, much like a guide runner for a blind athlete or a caddie for a golfer.”

For Meyers, the 2016 Rio Paralympic Games were a turning point. The U.S.O.P.C. did not assign a personal care assistant to the swim team, even though Meyers’s vision had worsened since she competed in the 2012 Paralympics and there were other blind swimmers on the team.

The U.S.O.P.C. said in response to emailed questions that swim team coaches, staff members and teammates were available to support Meyers in 2016. But Meyers said they were too busy or not knowledgeable enough to adequately help her.

“Nobody took the time to orient me and tell me where to go,” she said. “I just felt paralyzed.”

Meyers said she had trouble finding her way around the Paralympic Village, particularly the dining hall, and ended up barely eating for several days. At one point, she said, she was sobbing on the floor of her room with plans to withdraw from the competition and go home.

She was not able to eat properly and regain her strength until coaches allowed her to leave the Paralympic Village and stay with her parents. The experience pushed Meyers to make sure she always had a personal assistant when she traveled for competitions.

The swimmer Larry Sapp, an American record-holder with an intellectual disability, is raising money online to pay for his mother and usual traveling companion, Dee Sapp, to accompany him at the Paralympics because she is not part of the team.

“Larry needs his chaperone and caregiver to provide him with the care he needs while away from home,” the GoFundMe post said, explaining that the cost will be about $10,000.

The family declined to speak further on the issue.

Without a companion on his own journey, Brannigan experienced more complications even after he found his connecting flight for his trip to the California training camp. At the camp, Brannigan mistakenly took another athlete’s bicycle for a ride and misplaced it when he returned, creating tension that his father believes could have been averted if someone had been assigned to individually supervise him.

“He needs a lot of attention, and they are really oblivious to that,” Kevin Brannigan said.

He said he considered pulling his son out of this year’s Games after recently learning that he wouldn’t get the constant one-on-one supervision the family considers essential to his safety.

Since 2016, Brannigan’s family has paid for a personal coach, Sonja Robinson, to be with him at all times. But for the Tokyo Paralympics, his coach has not been formally designated as part of the team. Instead, she was given a pass that allows her to work with Brannigan during training and competition, but prohibits her from accompanying him to his living quarters or the dining area.

That distinction, which they found out about in mid-July after requesting that Robinson be included on the team staff, means that the Brannigans will have to pay Robinson’s expenses. They have started a GoFundMe campaign requesting $15,000 in donations.

Kevin Brannigan said he had been told that a coach on the national team staff would watch his son when Robinson could not be with him. The U.S.O.P.C. said that the coach had worked with and successfully supported Brannigan in the past.

But the coach, Rosalyn Clark, said that she would also be in charge of supervising her daughter, Breanna Clark, another Paralympic track champion with an intellectual disability. Brannigan’s needs are different from her daughter’s, Clark said, and she believes they should both have their own caretaker.

“I can’t say I’m qualified to take care of everything Mikey needs, because I don’t know him,” Rosalyn Clark said.

Kevin Brannigan said his son doesn’t always tell others — especially people he is not close with — when he is hurt, to the point where his injuries can go untreated for days. The Brannigans once belatedly found out that their son tore a muscle in his leg during a competition. After telling others, including medical personnel, that he was fine, Mikey Brannigan eventually confided in his personal coach that he was in pain.

In Meyers’s case, she trusts her mother the most to help her with her needs. For every competition since 2016, Meyers said the U.S.O.P.C. had declined to make her mother an official part of the team and also pushed back against Meyers’s repeated requests for her mother to accompany her as an informal personal assistant, meaning that Meyers had to pay for her mother’s expenses on each trip.

“Every year I had to fight for it,” she said.