This weekend is Wisconsin forward Annie Pankowski’s last shot to go out a winner in college hockey.

She is a three-time finalist for the Patty Kazmaier Award, which will be given out Saturday to the best female player in college hockey. She has never won.

On Friday, she will play in the Frozen Four with the Wisconsin Badgers for the fourth time. She has never won a national championship.

Top-seeded Wisconsin (33-4-2) faces the two-time defending champion Clarkson (30-7-2) on Friday in the semifinals at Quinnipiac University in Hamden, Conn., with Minnesota (31-5-1) and Cornell (24-5-6) vying to play the winner. The title game is Sunday.

“All the previous Frozen Fours have been different, but this one is my last,” Pankowski, 24, said. “As a team, we’re really hungry to win it.”

A native of Laguna Hills, Calif., whose older sister, Ali, played hockey at Princeton, Pankowski started skating at 4 and played on her first United States national team in 2013, before four years at the North American Hockey Academy in Stowe, Vt. At Wisconsin, she was the team’s leading scorer her first two years, and again this year, with 25 goals and 47 points. She won four conference championships with the Badgers.

Yet Pankowski’s hockey career has had devastating setbacks. She was a final cut for the 2014 Olympic team. She did not play for the Badgers in the 2017-18 season as she trained with the national team. But she was cut just weeks before the team was to leave for the Pyeongchang Olympics, after all the players had been assured when training camp began that the 23-person roster was set. The U.S. went on to win the gold medal.

Pankowski called it “one of the most awkward, painful experiences of my life.” The day after she was cut, still “heartbroken, confused and angry,” she said, she began the drive back to Madison, where she knew she would find support among coaches, teammates and friends.

“Those were the people I needed to surround myself with,” she said.

She finished the season practicing with her Wisconsin teammates, and throwing herself into another passion: training dogs.

Since her second semester at Wisconsin, she has been a volunteer at OccuPaws, a local nonprofit that trains guide dogs for people with sight and mobility disabilities. The program requires that the dogs live with her.

“It’s something outside of hockey and school that’s not stressful,” said Pankowski, who often treats her teammates to dog visits at practice. “You can feel the excitement whenever I bring a dog into the locker room.” 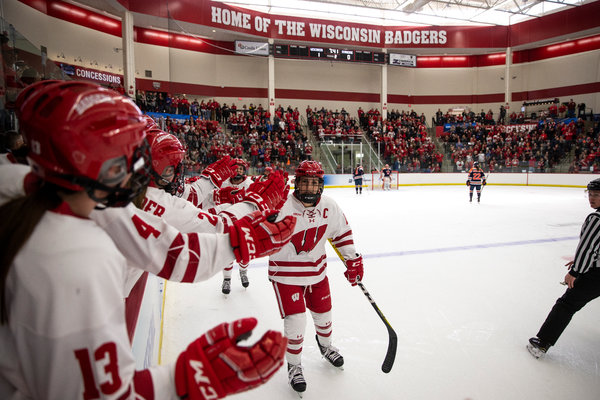 Pankowski, the youngest child of two veterinarians, has logged more than 2,000 hours of volunteer time with OccuPaws. That is one of the reasons she is a finalist for another honor: the Hockey Humanitarian Award, which recognizes a male or female player who makes significant contributions to the community through volunteering.

Pankowski also works in the lab of Mark Markel, the dean of Wisconsin’s School of Veterinary Medicine, and she plans to start veterinary school there in August.

“She’s a rock star as an athlete, a student, a volunteer and a worker in my lab,” Markel said. “I think all her hockey experience, including all the international tournaments she’s played in, has given her the discipline to pull off this off.”

Veterinary school is a four-year program, but a yearlong commitment to play in the 2022 Olympics in Beijing is possible, with Markel’s blessing.

“If she needs a year off,” he said, “we’re totally supportive of her.”

For now, though, her focus is on Friday night and Clarkson, the team that beat Wisconsin in the 2017 title game. The Badgers were the top team in the country all of that season and outshot Clarkson, 41-20, but lost, 3-0.

This year, Wisconsin heads into the Frozen Four 10-0-2 in its last 12 games. Pankowski scored Wisconsin’s first two goals in a 4-0 win over Syracuse in the N.C.A.A. quarterfinals last weekend.

Watching the game online, Bill Driscoll, the director of hockey at the North American Hockey Academy, said he knew she would “take this game over.”

“She has an elite-level shot,” he added.

Pankowski was on the U.S. team that won the Four Nations Cup in November, and she will play for the Americans at the world championships in Finland next month. Despite her Olympic disappointments, she has won two gold medals at worlds, in 2015 and 2016.

“She’s very cerebral on the ice,” said Bob Corkum, the national team coach. “She knows the spots to get to. She’s not the fastest skater or the strongest player or even the most skilled, but she’s very well rounded. All she does is put pucks in the net.”

Whatever the results this weekend, Markel said, he had no worries about how Pankowski will handle them.

“I think her resilience is going to be a blessing for her the rest of her life,” he said.