Ollie Wines was with several Port Adelaide teammates and had permission from the Power to be water-skiing when he suffered an injury to his right shoulder on Saturday.

Wines – who has been widely tipped to assume the Port captaincy left vacant by Travis Boak – was set to undergo scans early this week in Adelaide to assess the extent of the damage after being hurt while water-skiing near the Murray River town of Mannum in South Australia on Australia Day. 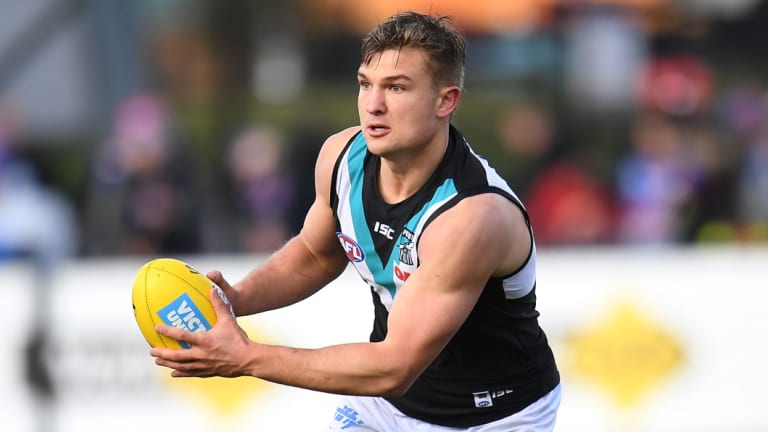 Promisingly, Wines trained at Alberton on Monday, with the gun midfielder running freely and without strapping on the shoulder in question. It’s understood the process of Wines being scanned was complicated by Monday’s public holiday.

Wines, 24, grew up in Echuca so has been around water sports for most of his life and is a very experienced water-skier. It’s understood Port were therefore comfortable with arguably their best player partaking in what can be a dangerous activity, with the club of the view that players need to be allowed leisure time.

Indeed several Port players recently played in a local Twenty20 cricket match in Adelaide, while Wines was with a group of teammates on Saturday when the incident occurred.

Wines last year turned his back on interest from Victorian clubs to pen a four-year deal with Port, which ties him to the club until the end of 2022.

He finished equal second in Port’s best and fairest count last year and again looms as a key player for the Power, who finished 2018 poorly to miss the finals, and traded dangerous midfielder/forward Chad Wingard to Hawthorn in the off-season.

The AFL standard playing contract dictates that a player must “not engage in any dangerous or hazardous activity, including but not limited to, trail bike riding, professional boxing or wrestling, soccer, gridiron, karate, judo, hang gliding, parachuting, or bungee jumping which, in the reasonable opinion of the AFL club, may affect the player’s ability to perform his obligations under this contract, without first obtaining the consent of the AFL club, which consent shall not be unreasonably withheld.”