Brimming with confidence after Friday's comprehensive home win over an in-form Adelaide, the Wildcats ruthlessly dismantled the Kings, leading by as many as 26 in the third quarter. 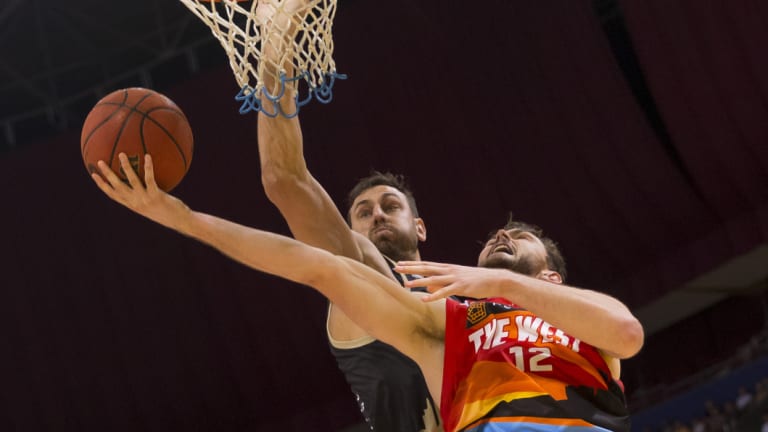 Angus Brandt of the Wildcats drives to the basket during the Round 15 NBL match between the Sydney Kings and the Perth Wildcats at Qudos Bank Arena in Sydney, Sunday.Credit:AAP

American duo Bryce Cotton (16 points) and Terrico White (13) were prominent in the runaway win, bench bomber Clint Steindl had 18, while forward Nick Kay (16 points, 10 rebounds, seven assists) produced one of the best games of his career.

Scores were tied late in the first period before Kings forward Daniel Kickert's three-point shot in the closing seconds made it 23-20 at quarter-time.

But that's when the party stopped for Sydney. The Cats pounced on a strangely subdued Kings in the second period, taking a stranglehold on the game through their suffocating defence.

With Bogut on the bench in foul trouble, the visitors swiftly turned a six-point lead into a 47-31 half-time advantage, restricting the Kings to a measly eight points in the quarter and exposing the offensive shortcomings which have plagued their recent performances.

Cotton led with 11 points, Kay was on track for a triple-double with six points, seven rebounds and six assists, while veteran forward Jesse Wagstaff added a valuable 10 points off the bench.

The Cats were never threatened in the second half, blowing the margin out to 26 and chalking up their 15th win to jump into top spot at Sydney's expense.

"It's gonna be a dogfight and we're treating every game to the end of the season like it's a playoff game," Cotton said.

"Sydney's a hell of a team and this is big win for us on the road. Right now we're rolling and the playoffs are right around the corner so hopefully we can keep it up.

"We have to treat our last four games like playoff games because they're gonna make or break where we are on the ladder."

Sydney coach Andrew Gaze would've had high hopes after Friday's hard-fought away victory over Brisbane but his team was sent crashing back to earth with their third straight home loss – all by double digits.

The Kings' 65 points represented their lowest output during Gaze's three-year tenure with the club.

"They were able to score some big buckets off offensive rebounds, and I know it sounds simple but we missed a lot of shots we'd normally make and they were shooting the ball really well," Gaze said.

"A little fatigue kicked in when we got down, and sometimes you have those games when the ball doesn't bounce your way. Clearly there's more to it than that but there's an element of that in there.

"The general theme is that if our defence is not an elite level and people are coming in and getting up to play the Sydney Kings.

"Teams have played really well against us and we haven't been able to get any teams on a downer."

Kings stars Jerome Randle and Andrew Bogut combined for 22 points, but Sydney were punished for lazy rebounding and continue to look vulnerable whenever defensive anchor Bogut is forced to the bench with fouls.

With five games remaining and their position in the top four under increasing threat, Gaze has to quickly find a way to restore his team's confidence on their home court.

The Kings (14-9) return to Brisbane on Friday to face the Bullets (12-10), while Perth host Illawarra, also on Friday.