Max Whitby believes the Golden Eagle is set to change to the way he attempts to fill his slot in The Everest in 2019 with European three-year-old sprinter-milers firmly in his sights.

The new $7.5 million race on Victoria Derby day would allow the right horse to potentially run for $21.5 million in stakes in a fortnight next year. 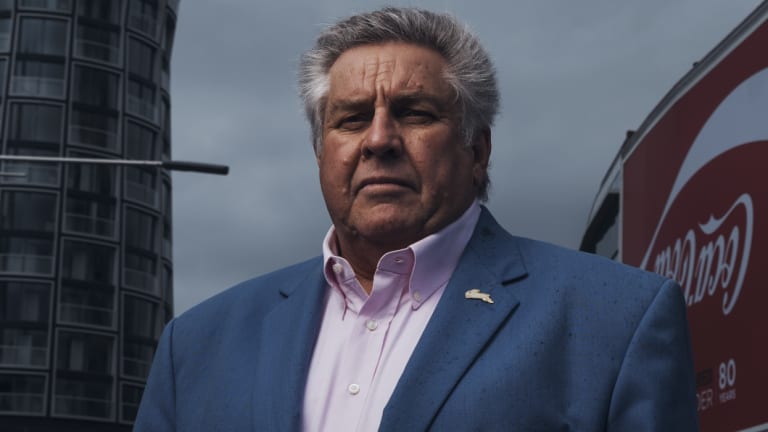 Soar with The Eagle: Max Whitby might look to Europe for an Everest contender that can also run in the Golden Eagle.Credit:James Brickwood

"He has done it again," Whitby said from London. "Peter V’landys, has done something no one was expecting and it will strengthen racing right across the spring.

"I have only just seen the concept but imagine if you could get a Guineas horse from over here and dangle the carrot of that sort of money at them what they will do. We could do a good deal."

The Golden Eagle will be run two weeks after The Everest and Racing NSW boss V’landys said it would be open to all four-year-olds in Southern hemisphere time. The past two Melbourne Cup winners Rekindling and Cross Counter have been European three-year-olds and it could open the gates to another invasion.

"The idea was to reinvigorate the Australian industry and keep our horses in work here for longer, stop them going to Asia and stud," V’landys said. "We would encourage horses to come over here from overseas and race for our big money and take on on the best if they think they are up to it." 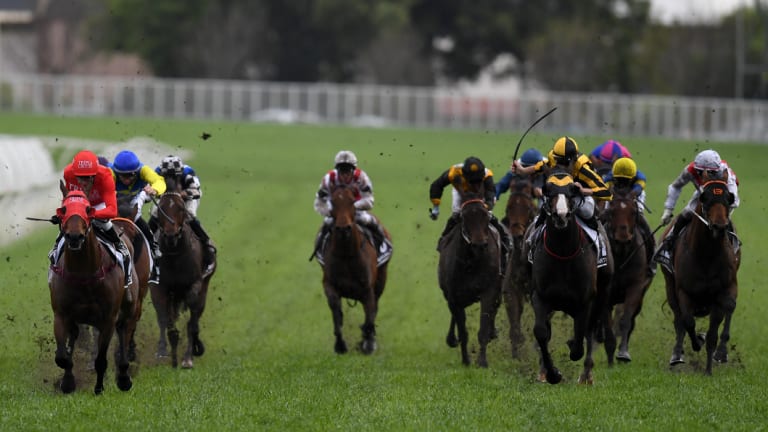 Big money: Redzel, left, wins The Everest for the second time in October.Credit:AAP

They might not have to worry about The Autumn Sun with Arrowfield Stud boss John Messara saying his colt would take the traditional path of group 1 racing.

The second-best horse in Australia is spelling after winning the JJ Atkins, Golden Rose and Caulfield Guineas this year and Messara said the son of  Redoute's Choice is at another level and would be more likely to run in a Cox Plate than the $7.5 million race restricted to four-year-olds.

"This race is a great concept but for a horse like The Autumn Sun, he needs to prove himself at weight-for-age now. He has already shown he is superior to his own age," Messara said. "It is those traditional races we would target, like the Cox Plate if he continues to race into his four-year-old.

"He is a different horse to what he was a couple of months ago. He's put on a significant amount of weight and thickened up. His structure has widened and just looks a strong colt.

"It doesn’t mean I wouldn’t want to have runners because it is a fantastic concept, which can only strengthen Australian racing.

"A horse like Maid Of Heaven would be one we would be a good fit for that race. She has already won a group 1 [in the Spring Champion Stakes] and I think she will be a very good miler."

Racing Victoria chef executive Giles Thompson said any move to grow the base of the sport was to be encouraged but he would prefer if it didn’t challenge the status quo.

"As administrators it is important that we continually strive to grow the overall fan base for racing and ensure that we are attracting future generations to our sport," Thompson said in a statement. "It would be in the best interests of Australian racing if we could act more collaboratively as a nation to achieve this and ensure that we are in fact growing the overall fan base.

"We hope that New South Wales’ programming initiatives do serve to grow the overall fan base of racing by encouraging new people into our sport and we wish them well in their endeavours to achieve that.

"The Victorian Spring Racing Carnival is an iconic global event that has proven to be wonderful catalyst in growing Australian racing both locally and on the international stage. We are committed to continuing that not only for the benefit of Victoria and our stakeholders, but for the industry nationally who prosper off its existence.

"The marquee events of the Spring Racing Carnival have been built over more than 150 years and retain an important place in the heart of Australians. This announcement is not going to change that."