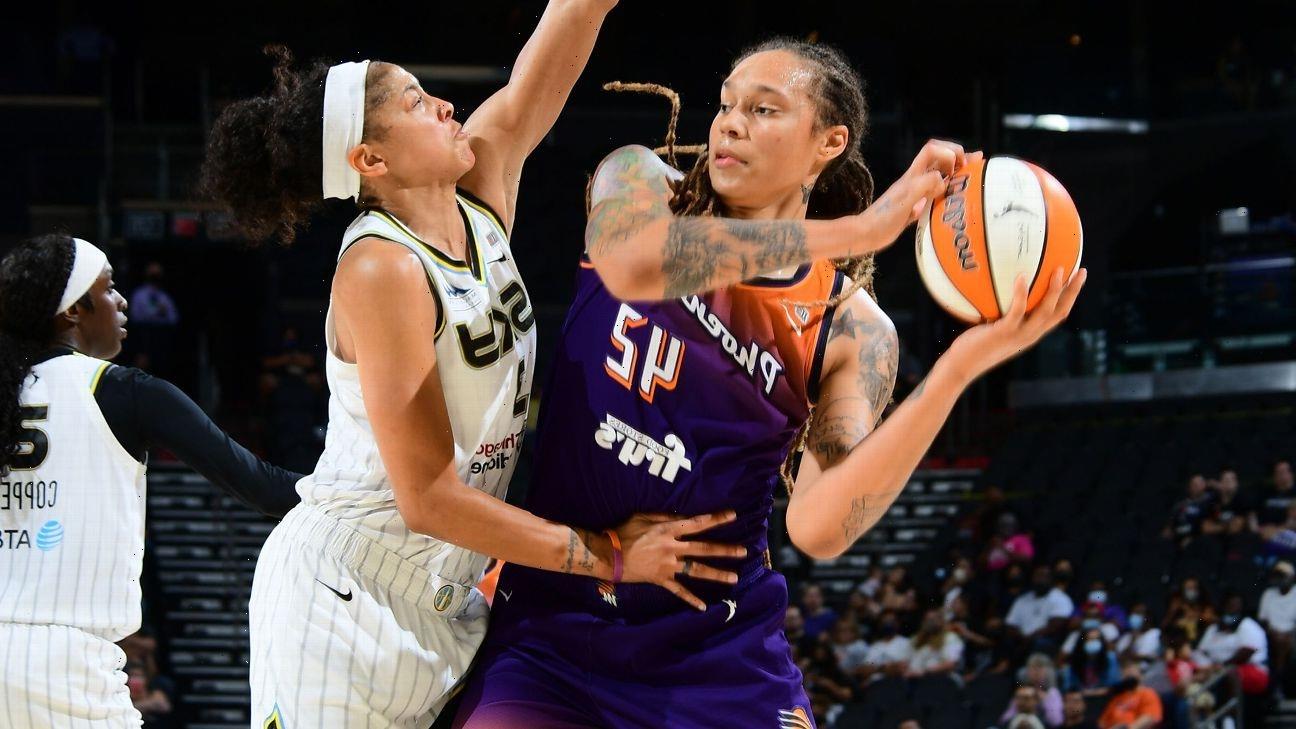 Mechelle Voepel covers the WNBA, women’s college basketball, and other college sports for espnW. Voepel began covering women’s basketball in 1984, and has been with ESPN since 1996.

Nothing beats coming up big when it counts the most.

The Phoenix Mercury’s Brittney Griner and Brianna Turner and the Chicago Sky’s Courtney Vandersloot and Kahleah Copper have zero MVP awards between them, but they have been the stars of the 2021 WNBA playoffs, putting the Mercury and Sky each a win away from the WNBA Finals.

The semifinals resume with a doubleheader Wednesday (8 and 10 p.m. ET, ESPN/ESPN App), where the top-seeded Connecticut Sun, with 2021 MVP Jonquel Jones, and the No. 2-seeded Las Vegas Aces, with 2020 MVP A’ja Wilson, are on the verge of elimination.

With a loss, Connecticut would become just the fifth team that had the league’s best record but didn’t make it to the WNBA Finals. If both the Sun and the Aces fail to reach the championship series, it will be just the second time that the Finals don’t include at least one of the league’s top two teams record-wise.

What else is on the line in these Game 4s? Which players have been rising to the occasion? And which players still need to?

The MVP of the postseason so far

The updated playoff leaderboard in my wins above replacement player (WARP) metric (see above) looks strikingly different from the leaders during the regular season.

To some extent, that was inevitable. The Seattle Storm’s Breanna Stewart, who led the league in WARP much of 2021 before finishing fourth in the regular season, never took the court during the playoffs due to injury. And the Minnesota Lynx’s Sylvia Fowles, who jumped Stewart to finish second behind MVP Jones of Connecticut, was bounced after a single game, ruling her out of a leaderboard based in part on volume. (Fowles’ lone game rated about as well by WARP as her typical one during the regular season.)

The Phoenix Mercury are a win away from becoming the first team to go from the opening round of playoff action to the WNBA Finals (something Chicago can also do) despite not getting accurate shooting from Skylar Diggins-Smith, who’s making 31% of her 3s and 44% of her 2s so far in the postseason — down from 37% and 49%, respectively, in the regular season. Diggins-Smith, tops among perimeter players and sixth overall in WARP, isn’t among the three Mercury players to crack the playoff top 10.

Instead, Phoenix has relied more heavily on its frontcourt. Griner, third during the regular season, has been the league’s most valuable player in terms of WARP by a wide margin in the playoffs as she commands and navigates nightly double-teams. That help has created opportunities for Turner, who ranks second in the league after finishing fifth on the Mercury during the regular season.

Lastly, there’s a notable team missing from the WARP leaderboard: Las Vegas has been shut out thus far. Wilson, fifth during the regular season, has shot 38% from the field against Phoenix and is 9-of-18 from the foul line — shocking for an 88% shooter this season. Liz Cambage’s limited production in the postseason (11 PPG, 4 RPG in 19 minutes) was more predictable after she battled a breakthrough case of COVID-19 late in the regular season.

If the Aces are going to rally after losing their last two games by a combined 53 points, they’re going to need their frontcourt stars to play a lot more like they did all year long en route to the No. 2 seed. — Pelton

Wilson is used to battling for baskets, but Phoenix has made it really difficult. According to ESPN Stats & Info, Wilson has just two transition baskets over the three games so far of the Aces-Mercury semifinal series, and 25 of her 32 half-court field goal attempts have been contested.

She is 10 of 29 (34.4 percent) when either Turner or Griner is the primary defender on her. And when Wilson is getting open looks, they’re coming from places the Mercury prefer she shoot from: She is 9 of 25 (36 percent) on uncontested attempts.

Meanwhile, Las Vegas’ defense hasn’t been able to slow Griner either as a scorer or a passer. The Mercury are shooting 70% off Griner’s assists. — Voepel

Can the Sun make the Sky pay for doubling Jones?

So far, sending multiple defenders at Jones has worked for Chicago — especially when one of them is Candace Parker.

Jones is shooting just 27 percent (3 of 11) when Parker is the primary defender against her. By contrast, Parker is shooting 6 of 12 against Jones’ defense. When the Sky has doubled Jones in the series, understandably she has been limited on openings to score. According to ESPN Stats & Info, Jones has just four field goal attempts on 25 half-court plays in which she has had multiple defenders.

The Sun’s perimeter shooters have to make it hurt for the Sky to collapse on Jones. Jasmine Thomas might try to do that more in Game 4, but so far she’s 1 of 6 on 3-point attempts when Jones was doubled. — Voepel

What else is at stake Wednesday?

Those four came during the pre-2016 playoff format, which matched the Eastern and Western Conferences instead of seeding the top eight teams. In 2000, for example, the Sparks and Houston (27-5) had to face each other in the conference finals, and five of the teams in the West that year had better records than all but one team in the East. (Each conference had eight teams then.)

The only time the Finals didn’t include at least one of the league’s top two teams record-wise was in 2006, when both the 26-8 Sun and 25-9 Sparks were eliminated before the championship series. Instead, 23-11 Detroit and 21-13 Sacramento played for the championship, won by the Shock.