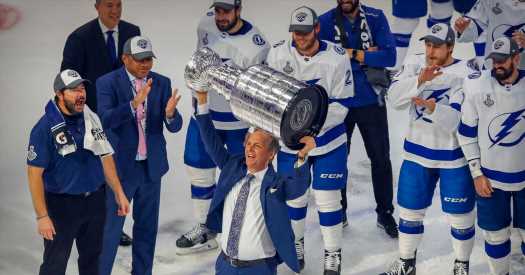 After blowing a late-game lead and losing, the Green Bay Gamblers hockey players received a simple order from their coach, a former lawyer named Jon Cooper: For their next practice back home, meet at a local park at 7 a.m.

When they arrived, the only trace of Cooper was a note, left under a puck in the middle of a football field.

“This is what it feels like when we show up to every game and you guys don’t!” it read. “Figure it out!”

“That completely flipped our season,” said Pat McCadden, the captain of that 2009-10 Gamblers team. Their season ended with a Clark Cup, the championship of the United States Hockey League, the country’s top junior league.

Cooper would lift the 2020 Stanley Cup a decade later, in his seventh season as coach of the Tampa Bay Lightning.

“That’s just Coop, man,” said Jeff Mitchell, Green Bay’s president of hockey operations, who was part of the group that hired Cooper in 2008. “He’s got that special sauce.”

Since leaving law in 2003 to devote himself full time to hockey, Cooper, 53, has won championships with every team he has coached: at: two levels of junior hockey, in the American Hockey League and in the N.H.L.

Asked to list the secrets to his success, Cooper smiled slightly and provided his admittedly stock answer.

“One, understanding life,” he said. “Two, a loyal dog. And three, a good goaltender.”

Those who have played for Cooper, hired him and witnessed his handiwork say his ability to make adjustments and connect with all types of players has been integral to his success.

“To be a good teacher, you have to be able to get the most out of players in different ways,” said Kelly Chase, a former N.H.L. player who owned part of the first team that Cooper coached after ending his law career. “Coop understands how to do that.”

Unlike the vast majority of his peers, Cooper never played organized hockey beyond high school, though he played lacrosse at Hofstra University on Long Island.

While Cooper was working as a public defender in Lansing, Mich., a district court judge asked him to coach his son’s high school team. The Lansing State Journal named Cooper the Michigan Coach of the Year after his first year on the job.

Chase, a friend of Cooper’s since their high school days at a boarding school in Saskatchewan, came calling a few years later.

Chase and a few other investors had purchased a North American Hockey League expansion team in Texarkana, Texas.

Cooper’s duties as coach of the Texarkana Bandits included painting the ice, selling season tickets and driving a van to practice.

Pat Maroon, who is in his second season with the Lightning, first played for Cooper as a 17-year-old during the Bandits’ 2005-06 season. He blossomed from a self-described overweight and slow child into the N.A.H.L.’s most valuable player in his second season under Cooper.

“He had all 24 guys play for him every single night,” Maroon told an Edmonton newspaper in 2016. He’s one of the reasons I am where I am now.”

A key to Cooper’s success, Chase said, is that he doesn’t stop learning.

Chase recalled riding in a car once with Cooper and thinking that the coach’s musical selection was strange. Cooper told him it was what his team, then mostly teenagers, was listening to in the locker room. “If you’re not,” Chase recalled Cooper saying, “you can’t figure them out.”

McCadden, now the associate head coach at Lawrence University in Wisconsin, said that Cooper knew how to manage people well and that his composure reassured players.

“So many coaches lose their mind over an offsides call in the first period, but Coop was so good in whatever situation we were in,” McCadden said.

Cooper had immediate credibility with the Lightning, as 10 of their players had been with him in the minors in Norfolk, Va., and Syracuse, N.Y. He ultimately earned credibility with veterans, too, including Steven Stamkos, who has been with Tampa Bay since 2008 and has been its captain since 2014.

“At that level, you have all Type-A personalities,” said George Gwozdecky, one of the Lightning’s assistant coaches during Cooper’s first two full seasons in the N.H.L. “He has the gift of being able to bring all those A-types together. That a great part of his talent.” 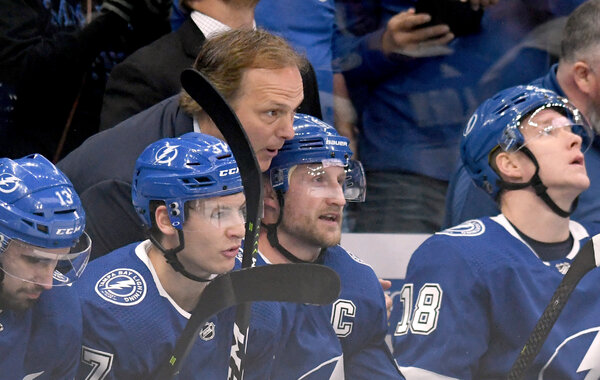 Success came early for Cooper in Tampa Bay, but not a championship — unlike elsewhere. In his first full season, the Lightning reached the playoffs again after a two-year hiatus. They lost to Chicago in the Stanley Cup finals in 2015. In 2018-19, they won 62 games and the Presidents Trophy but were swept in the first round of the playoffs by Columbus.

Stamkos said Cooper has improved as a coach over the years, creating favorable matchups in the playoffs and knowing what buttons to push with his players. He has had the benefit of continuity as several key players — Stamkos, Victor Hedman, Ondrej Palat, Alex Killorn and Tyler Johnson — have been with the Lightning for his entire tenure.

Many successful coaches have benefited from working with star players, and Cooper is no exception, with past trophy winners on his roster: Vezina (Andrei Vasilevskiy), Maurice “Rocket” Richard (Stamkos) and Norris (Hedman).

But Cooper’s teams have succeeded even at less than full strength. The Lightning made the playoffs in 2013-14 despite Stamkos’s playing only 37 games, and last year Stamkos was injured on Feb. 25 and didn’t play again until Game 3 of the finals, when he took just five shifts and scored on his only shot of the game.

“All these new situations he’s been confronted with and had to manage have made him all the better equipped to be one of the best hockey coaches in the world,” said Julien BriseBois, the Lightning general manager who ran the A.H.L. team during Cooper’s tenure there.

In fact, among coaches with at least 500 career games, only the retired Hall of Famer Scotty Bowman (.657) had a better points percentage than Cooper (.645) entering this season.

Cooper, or anyone else, is unlikely to match Bowman’s nine Stanley Cups, but continuing to get better at his job seems a more probable career path.

“It’s a constant process with him,” Stamkos said.