Sunday’s first-round match was certainly not the French Open debut that Coco Gauff envisaged when she won the junior girls title in the sunshine here in 2018 at age 14.

Instead of playing to a full house and springtime breezes, Gauff faced Johanna Konta in late September on a 10,000-seat show court that was all but empty of spectators amid a persistent drizzle and chilly winds.

But despite the nasty weather and her 12 double faults, Gauff found a way to stay upbeat and get the better of yet another elder, defeating the ninth-seeded Konta 6-3, 6-3 in Gauff’s first main-draw match at Roland Garros.

“Being a Floridian, basically we have one week of winter, and this is what it is,” Gauff said.

At 16, Gauff, the phenom from Delray Beach, has already won a singles match at all four of the Grand Slam tournaments, and her resilience on Sunday was an apt metaphor for the French Open as a whole.

Postponed for four months because of the coronavirus pandemic, it was a struggle to make this event happen at all. Though temperatures were genuinely balmy last week in Paris, they were more suited to the deck of a North Atlantic fishing trawler on opening day.

Tights and long sleeves were de rigueur and some stars opted for even sturdier gear.

Venus Williams, the 40-year-old American veteran, entered the Simonne Mathieu Court wearing a puffy winter jacket with the hood pulled up. She proceeded to play — and lose — her first-round match to Anna Karolina Schmiedlova while wearing a visor when a wool watchcap might have been more appropriate.

Victoria Azarenka, a finalist at the United States Open just two weeks ago, walked on court to face Danka Kovinic and then insisted on walking off with her opponent less than 30 minutes later.

With Azarenka leading 2-1, she and Kovinic were initially asked to wait out a rain delay on court.

“I’m not sitting here because I’m going to get frozen,” Azarenka said from under her umbrella to an official.

Azarenka then approached Kovinic, who agreed it was better to seek shelter elsewhere. 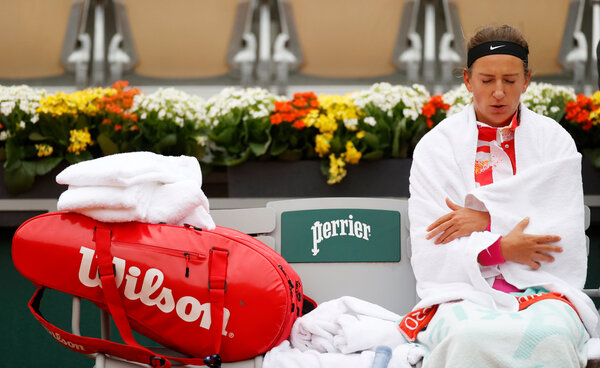 But they eventually paddled their way back to the sodden clay, with Azarenka winning 10 of the next 12 games to finish off a 6-1, 6-2 victory.

“It’s all about adjustment these two weeks,” the 10th-seeded Azarenka said. “Some shots that I hit today, I don’t know if it was good tennis or just great adjustments because they weren’t really pretty shots sometimes.”

Tour-level tennis can be played in light rain on clay courts, which is not the case on grass or slick hardcourts, and the French Open should have plenty of opportunities to test the limits in the days ahead.

Rain and temperatures in the 50s and low 60s are forecast throughout the tournament. Though the French Open finally has a new retractable roof in its main Philippe Chatrier Court, it is the only covered court, and there are more than 200 matches scheduled during the first week.

A recent spike in coronavirus cases in the Paris region has restricted spectators on the grounds to 1,000 per day, and on Sunday, most of them chose to stay under cover on the Chatrier court.

Was Roland Garros in fall a bad idea? Would the organizers have been wiser to cancel their Grand Slam tournament, as Wimbledon did this year?

“It’s a complicated question, it really is,” Azarenka said.

One complication is that the French Open moved to its new dates unilaterally without consulting with the men’s and women’s tours — a land grab that raised plenty of hackles.

“The unfortunate part with the French Open is that there is no communication with players or player council,” Azarenka said. “I hope this actually will kind of change in the future.”

But the French Open, unlike Wimbledon, did not have cancellation insurance that would have paid out during a pandemic. Calling off the tournament would have meant a massive financial loss and also no payday for the players.

“Lower-ranked players and doubles players have been hit pretty hard financially with the situation,” Azarenka acknowledged, “so it’s definitely a great opportunity to be able to have the tournament.”

Paris weather can be soggy in the spring, as well. The 2016 edition of the tournament was aptly called The Drench Open. And it was not just drizzly that year — it was often chilly, too.

“You know, most years it’s pretty cold and rainy here, whether it’s in May or right now,” Williams said.

In truth, it’s a mix most years but it is perhaps worth remembering that Novak Djokovic and Garbiñe Muguruza won their only French Open singles titles in 2016.

Both are top contenders again, as is Simona Halep, the No. 1 women’s seed and 2018 French Open champion, who defeated Sara Sorribes Tormo 6-4, 6-0 in the first round on Sunday. Stan Wawrinka, the 2015 French Open champion, also sent a message by routing former No. 1 Andy Murray 6-1, 6-3, 6-2. Their match was much more compelling on paper than it was on clay as the powerful Wawrinka clubbed winners even in the heavy conditions.

Benoit Paire also returned to Grand Slam competition with a 7-5, 6-4, 6-4 victory over Kwon Soon-woo. Paire, a flashy French shotmaker with a hipster’s beard, was forced to withdraw from the U.S. Open after testing positive for the coronavirus, isolating in his Long Island hotel room for 10 days before returning to Europe. He tested positive again at an event in Hamburg, Germany, last week but was given permission to play by German health officials who deemed him less of a risk.

He then tested negative in Paris, allowing him to take the court on Sunday.

The opening match on the Chatrier court, the first at Roland Garros under a closed roof, was between Jannik Sinner and David Goffin.

It was the main-draw French Open debut for Sinner, a 19-year-old Italian with a cherub’s visage and an assassin’s groundstrokes. He coolly defeated the 11th-seeded Goffin 7-5, 6-0, 6-3, several hours before Gauff, another French Open rookie, held firm to defeat Konta, a French Open semifinalist last year.

Remarkably, neither teen’s victory felt much like an upset. Sinner, a former competitive Alpine skier who trains under veteran coach Riccardo Piatti, has long been considered a future star.

Gauff already is a show-court regular after reaching the fourth round at Wimbledon last year and the Australian Open this year before turning 16. Along the way, she has beaten four top 20 players: Kiki Bertens, Naomi Osaka, Aryna Sabalenka and now Konta in the same stadium where she won her junior title in 2018.

Gauff’s French, which she is studying, remains a work in progress, as does her game. Her second serve continues to be a liability. In her past three tour matches, she has had more than a dozen double faults. She also relies too heavily on the same second-serve patterns.

But she is a sparkling talent, great mover and precociously gritty competitor: committed to all-court tennis and capable of prevailing even when far from her best, something former top 10 player Brad Gilbert long ago labeled “winning ugly.”

It was that sort of opening day at Roland Garros.