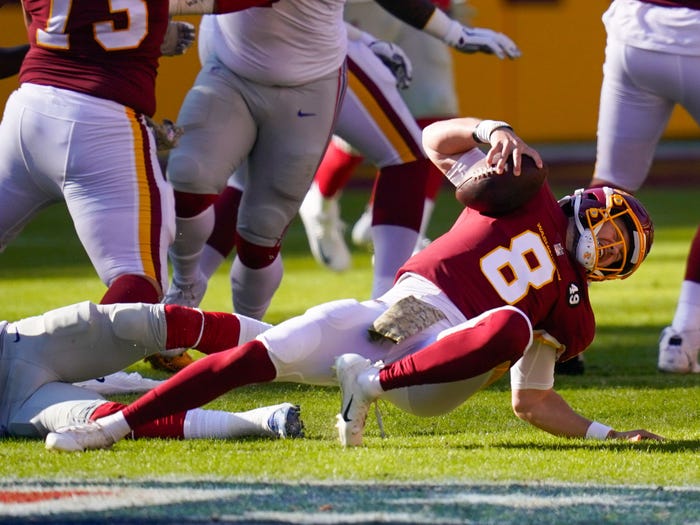 Washington Football Team quarterback Kyle Allen had to be carted off the field after suffering a gruesome ankle injury late in the first quarter of Sunday's game against the New York Giants.

Allen had the Washington offense moving in New York territory, when Giants safety Jabrill Peppers caught him in the backfield on a blitz. While Peppers had been half-caught by a block thrown by running back Antonio Gibson, he had enough momentum to dive forward and bring down Allen.

Replays showed that Peppers' leg had whipped into Allen's leg, leaving the Washington quarterback with an awkward fall to the ground.

Warning: Some may find this video disturbing

Allen was carted off the field after receiving some treatment and met with cheers from the limited crowd present at FedExField.

In an odd, possibly cruel twist of fate, Allen was replaced by Washington backup quarterback Alex Smith, who two years ago suffered a gruesome leg injury of his own that left his NFL career in jeopardy.

Smith made his return to the NFL a few weeks ago after a previous Allen injury. With this latest leg injury, it's possible that Smith will see some extended time under center for Washington moving forward this season.