The World Anti-doping Agency this week imposed a four-year ban on Russia’s national sporting teams for a systematic doping operation that involved more than 1000 athletes. This means Russia won’t be able to compete at the 2020 Tokyo Olympics or the Football World Cup in 2022, but the punishment should also send a broader message to President Vladimir Putin. 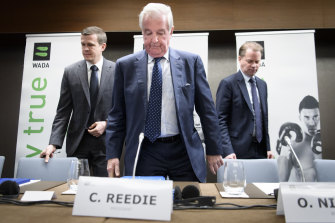 WADA was forced to act against Russia after a whistleblower from inside the country’s anti-doping agency revealed in 2015 how Russia doped its athletes and hid this from scrutiny.
After that scandal, WADA banned the Russians from competing as a team in the 2018 Winter Olympics in South Korea. Incredibly, even after that humiliation, Russia tried to cover its tracks rather than take responsibility for what it had done.

In January this year, it tampered with digital records supplied to WADA investigators tasked with deciding whether Russia’s anti-doping agency had reformed and could be brought in from the cold.
This week’s ban means Russians will not be able to compete as a team with team colours or flags and Russian politicians won’t be able to attend events in an official capacity.
The Track Cycling World Cup in Brisbane this year could be one of the last events at which Russia’s flag can be flown.
Australia’s anti-doping agency, ASADA, has welcomed the ban, but the US anti-doping agency has criticised WADA’s decision because individual Russian athletes who can prove they were not part of the racket will still be allowed to compete as neutrals.

WADA was right. A blanket ban would have been unfair to those athletes who stayed clean even as others around them went rogue. Russia has responded to WADA’s decision with the same mix of bluff and lies it deployed to avoid responsibility for supplying the missiles that shot down flight MH17 over Ukraine or using nerve gas on a defector in Britain. Russian Prime Minister Dmitry Medvedev said it was just more “anti-Russian hysteria” and has indicated the country could still appeal the decision.

But such bravado should not hide the fact that this hurts the Kremlin. Russia’s leadership uses its high medal tally at the Olympics as proof of national success. Mr Putin likes to slap a puck with the national hockey team in a show of strength, but the WADA ban means there will be no bear hugs with the players at the 2022 Winter Olympics.
Unfortunately, authoritarian regimes are often happy to tough out international pressure rather than admit to their people or the world they have been lying. Each new lie makes it harder to tell the truth.

WADA could face an even bigger test in the case of Chinese swimming star Sun Yang, whom it has accused of tampering with a drug test. The Court of Arbitration for Sport is due to decide Sun’s fate in the next few weeks. If he is banned, China could be almost as angry as Russia. WADA will come under incredible pressure to compromise its rigorous approach if it has to take on Russia and China at the same time, which will in turn test Australia and other principled countries when it comes to drugs in sport.

Anti-doping rules are complicated and controversial and WADA can make mistakes. But the Olympics were founded on a spirit of fair play, which must be protected. All sides need to accept the decisions of the referee. WADA must not cave in to political pressure.