The Melbourne Vixens humiliated the Sunshine Coast Lightning on Saturday, demolishing their closest rivals for the Super Netball premiership and qualifying for the grand final in a fortnight's time.

The Vixens' defensive pressure to smother the Lightning's attack was exemplary, and it provided the platform for their own attack to receive free-flowing service and punish their opponents on the scoreboard. 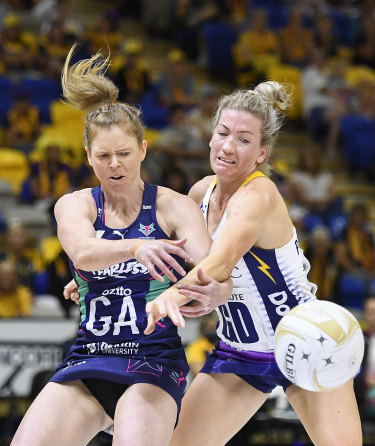 Vixen Tegan Philip and Karla Pretorius of the Lightning compete for the ball.Credit:Getty Images

Save for short periods in the first and final term the Lightning were not able to get any momentum in the match at all.

Melbourne secured the minor premiership with three games left in the season and on Saturday condemned the second-place Lightning to a preliminary final next week, to have any chance of the Queensland side winning a third title in four years.

Simone McKinnis' team have not won a grand final since 2014, nor have they been in one during the Super Netball era, but this performance will only solidify their position as the team to beat in 2020.

The Vixens made a five-goal-to-one start in the first term, with retiring veteran Caitlin Thwaites leading the charge. They extended the margin at every break, leading by five goals at quarter time, 14 points at half-time and a whopping 20-points at the final break.

Kate Eddy missed the game through injury but youngster Allie Smith deputised in her place with aplomb.

Liz Watson dominated the middle of the court as she has done all season, while Emily Mannix was un-moveable in defence.

Mannix said it felt "surreal" to have qualified for the grand final.

"I can't believe we bloody got here. It's unreal that the whole crowd was against us … But you know, credit to Sunny Coast. Great team. We knew we really had to put out a really good performance today. We did that. It was quite consistent."

She singled out Smith for coming into a high-pressure match and performing well.

"[Smith] has come in and done a great job … really brought something. Credit to our girls out there today. They did a good job."

The Vixens will play either the Lightning or the winner of Sunday's NSW Swifts and West Coast Fever match in the grand final on October 18.