The Melbourne Vixens have gone back to the top of the Super Netball ladder after a gritty win over the GWS Giants on Sunday.

Melbourne stared down a resurgent Giants side playing to stay in touch with the top four, and pulled ahead of their opponents in an entertaining second half display. 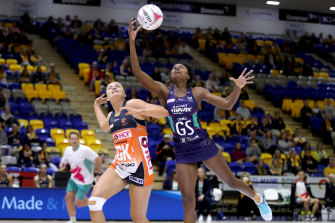 Vixen Mwai Kumwenda controls the ball against the Giants.Credit:Getty Images

Liz Watson was again at the heart of the Vixens' attacking power with 26 goal assists, while Caitlin Thwaites and Mwai Kumwenda held their nerve to score consistently as the Giants sunk a series of Super Shots.

A Super Shot to Jo Harten got the Giants within two points of the Vixens with little time to play in the final term, but subsequent Super Shot misses to Kiera Austin and Harten kept Melbourne in control.

Austin put on a clinic from the two-point zone shooting eight from nine.

Four of those came in the third term, where Kumwenda also scored three two-pointers to maintain the Vixens' lead.

The Giants remain six points outside of the top four following the loss but will be proud of their effort.

They seemed galvanised after their narrow defeat last week, which came when Kristiana Manu'a was controversially sent off.

Manu'a, who played on Saturday, thanked everyone for the support over the past week.

"I just want to say thank you all for the support. It's been so overwhelming. Getting emotional, I don't know why. My family has been backing me up. I don't know why I'm crying," she said.

"This has been a hectic week for us. I think they [teammates] have really backed me up. I'm so thankful for the team, for the whole netball community in general. Everyone's really backed me. I think I'm just happy to sweep it under the rug and keep playing and hopefully winning some games."

Player of the match for the Vixens Kate Moloney said the Vixens would continue to look for improvements despite leading the league.

"Always a tough battle up against Jamie-Lee [Price, the Giants centre]," Moloney said. "She is a great player and really physical out there. So it was really good. I'm glad we got the win.

"We knew they were going to come out strong, especially after their game last week. We knew we had to hang in there and if we can do that we'd get over the top. Proud of the girls for being able to finish it off at the end.

"It's about keeping on growing, our defensive pressure the last couple of weeks has gotten better and better. Just being able to stay composed in attack. We have to keep getting the wins on the board. It's going to be really crucial this year."