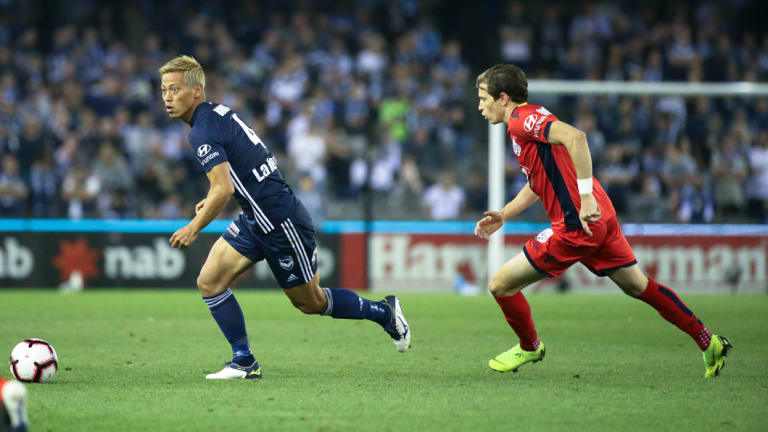 Keisuke Honda of the Victory runs away from Craig Goodwin of Adelaide United.Credit:AAP

Melbourne Victory have stretched their A-League winning streak to five with Ola Toivonen steering them to a 2-0 defeat of Adelaide United.

Toivonen set up the first goal, scored by Kosta Barbarouses, and added one of his own in the 81st minute to cap the win on Saturday night at Marvel Stadiumn.

Barbarouses broke the deadlock in the 62nd minute after Terry Antonis fired in a ball which was headed by Toivonen.

Reds goalkeeper Paul Izzo managed to save the Swede's shot but Barbarouses pounced on the rebound.

Antonis also had a hand in Toivonen's goal, with his neat backheel flick picked up and smashed into the net. 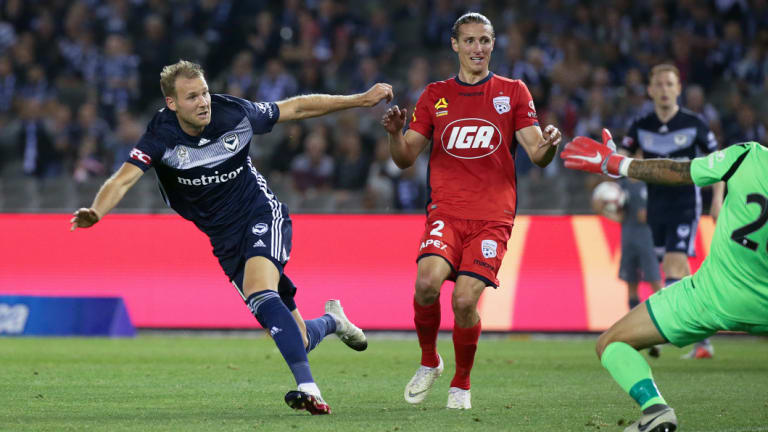 Adelaide did well in the first half to contain the defending champions and particularly Japanese superstar Keisuke Honda.

They had the best chance of the opening stanza with a thumping header by Michael Marrone in the 15th minute hitting the crossbar.

Melbourne did well to recover from the early loss of defender Georg Neidermeier, who rolled his right ankle in a clash with Stamatelopoulos in the fourth minute.

The big German immediately limped from the field and had his ankle strapped and tried to play on before making his departure permanent in the ninth minute with James Troisi entering the fray.

Thomas Deng worked hard to cover the loss of his teammate and was one of Melbourne's best.

It continued a run of bad luck for Niedermeier, who was forced off the field after an accidental punch to the head against Perth in round two and was concussed in round five in the Big Blue.

Home fans were upset midway through the first half when United's Scott Galloway unintentionally handballed in the box, but referee Shaun Evans waved it away.