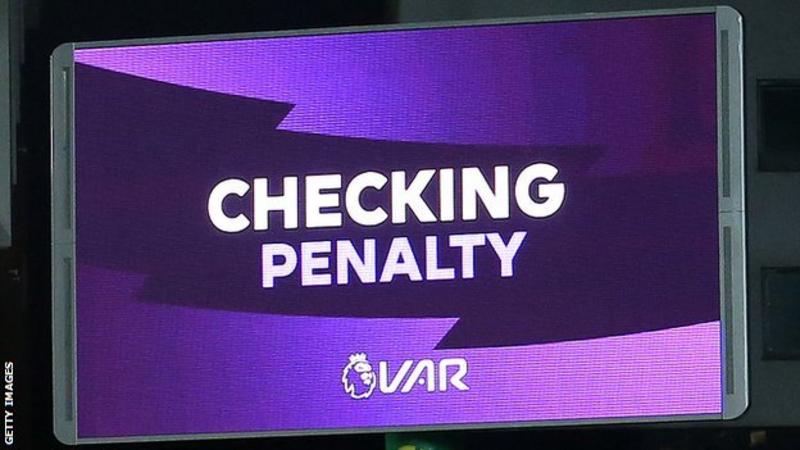 The league introduced VAR this season but a number of high-profile decisions have been criticised over inconsistencies and the time it takes.

However, on Thursday, top-flight clubs were told that there would be no substantive changes this season.

“Issues may only be fully resolved by greater clarity within the laws themselves,” the club executive said.

The league has brought in the system to decide on goals, penalties, red cards and offside decisions.

There have been intense deliberations over offside incidents, including Liverpool forward Roberto Firmino’s goal against Aston Villa on 2 November which was ruled out because his armpit was marginally in front of defender Tyrone Mings’ knee.

The FA rules state that “any part of the head, body or feet” can be regarded as offside.

Criticism of VAR has also included the lack of communication with fans and referees not using pitch-side monitors.

On 10 November, Manchester City were denied a penalty for a claim of handball against defender Trent Alexander-Arnold in their 3-1 defeat by Liverpool at Anfield.

The incident went to the monitors at Stockley Park but before reaching a decision, VAR had to take into account whether Alexander-Arnold had made his body unnaturally bigger, his arm was more than shoulder height and whether Bernardo Silva was in close proximity.

“All these factors contribute to a time-consuming process that is particularly irritating to fans in the stadium, yet these, in themselves are nothing to do with VAR and won’t change unless the laws do,” said the source, who was at the Premier League’s shareholders’ meeting in London on Thursday.

The Premier League has promised to improve VAR’s consistency and speed and increase communication with fans.

The league will also lead a consultation with “fans and other relevant stakeholders” on the technology.

Is there a desire to scrap VAR? – analysis

While the Premier League clubs accept there can be no substantive changes this season, they are committed to improving communication, both for fans in the stadium and those watching on TV.

This may mean the implementation of ‘explainers’, as happens in Major League Soccer. It launched a Twitter feed to explain what was being reviewed, why and the outcome in real time.

However, there is also a feeling that those working around VAR can only do so much in searching for greater consistency.

A full review is likely to take place in the summer but BBC Sport understands there is no appetite to scrap the system completely.