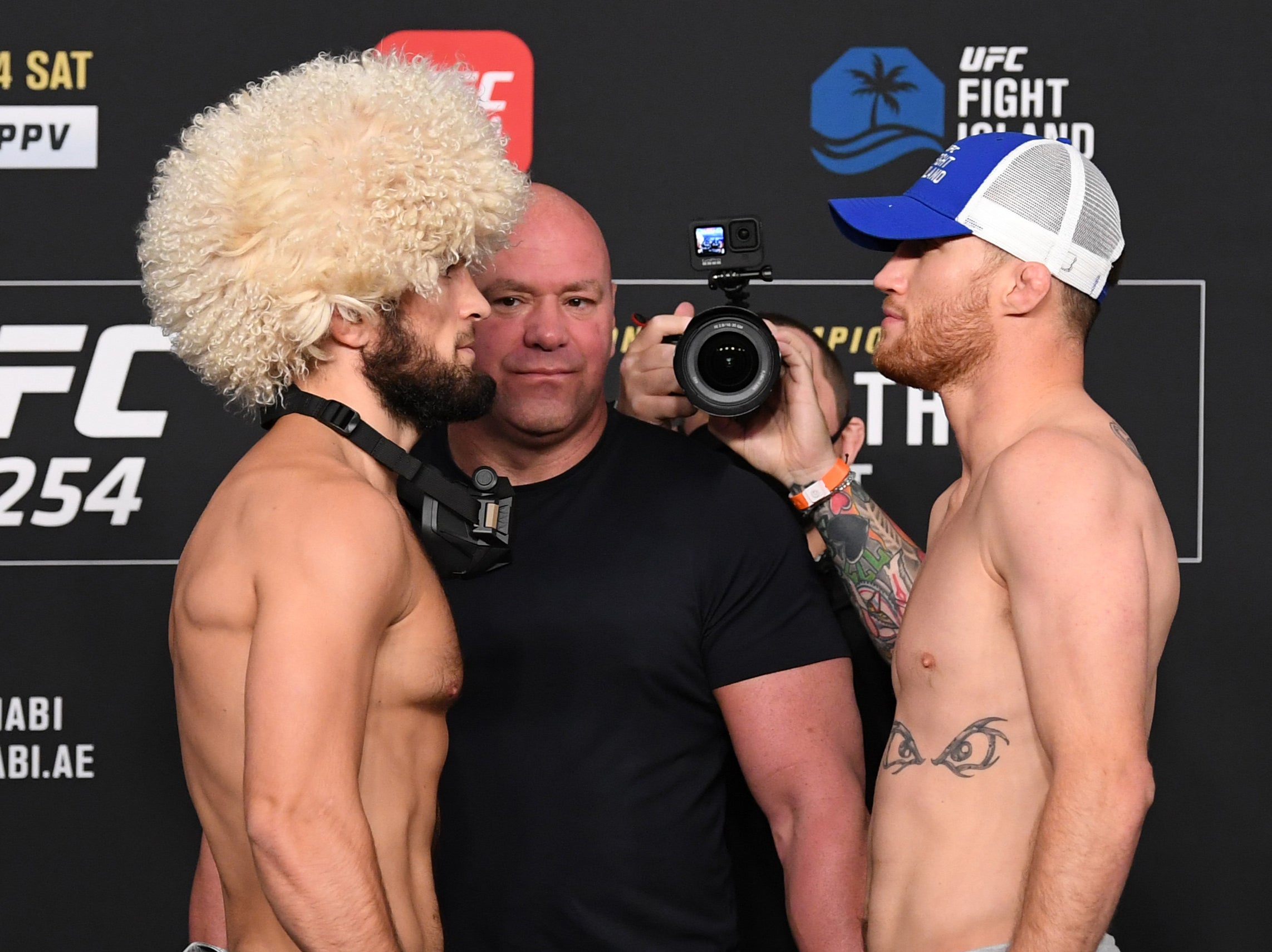 Khabib Nurmagomedov returns to the Octagon tonight as he defends his lightweight title against interim champion Justin Gaethje in the main event of UFC 254 on ‘Fight Island’ in Abu Dhabi.

Nurmagomedov (28-0) last fought exactly a year ago – also in Abu Dhabi – while Gaethje (22-2) claimed the division’s interim strap back in May by dominating the favoured Tony Ferguson and finishing him in the fifth round. American Gaethje has a wrestling background but is known as a knockout artist, with 19 KOs/TKOs from his 22 wins. Nurmagomedov, meanwhile, is famed for his relentless pressure and grappling, which have set up eight KOs/TKOs and 10 submission victories in his hugely impressive MMA career.

The co-main event on Fight Island sees former middleweight champion Robert Whittaker come up against the division’s No2-ranked Jared Cannonier in a three-round contest. Follow live updates from the prelims and then the main card below:

Rakhmonov makes a very successful UFC debut to move to 13-0 with a win against a very experienced opponent.

After showing off his stand-up skills, the Kazakhstani finished the fight on the ground, locking in a guillotine with seconds left in the first frame.

ALEX OLIVEIRA VS SHAVKAT RAKHMONOV – Round 1

Rakhmonov locks in a guillotine and Oliveira can’t find a way to relieve the pressure! It’s all over!

ALEX OLIVEIRA VS SHAVKAT RAKHMONOV – Round 1

Oliveira light on his feet to start, but Rakhmonov – in his UFC debut – quickly finds some striking success. He lands a nice combo against the fence, with a knee and uppercut doing landing.

Oliveira is able to make space and recover, however, before locking up with Rakhmonov against the fence. Good control here from ‘Cowboy’.

Oliveira, who is on a two-fight win streak, missed weight earlier this week. It’ll be interesting to see whether that gives him an advantage or disadvantage here…

A very entertaining bout there to kick off the prelims. Alvey started strong, but Jung grew into the fight, causing serious damage with his elbows in the final of the three rounds. There was so little to separate the two light heavyweights, with the split draw likely marking the correct result.

It’s a draw! And to be honest, it’s probably the right result.

It’s a wild end to the fight, with Jung landing a number of devastating elbows intermittently on the feet! This has been a close contest through 15 minutes and it’ll go to the judges…

Actually it was an elbow to the chin that dropped the American!

Jung is starting to land again up top, but Alvey’s leg kicks have been very effective so far – landing nine from nine.