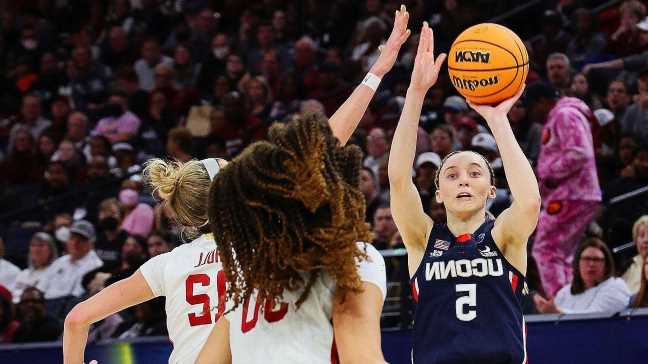 STORRS, Conn. — The 2020-21 women’s college basketball national player of the year Paige Bueckers said Thursday that while she will be age-eligible to declare for the 2023 WNBA draft, she will return to UConn for the 2023-24 season despite being sidelined this upcoming season with an ACL injury.

“I’m not leaving. That is not in question,” Bueckers told reporters on Thursday in her first media appearance since her August injury. “People asked me, ‘What are you thinking about fifth year, COVID year, redshirting this year.’ I’m not thinking too far ahead about that at all. But I will be playing college basketball again.”

Bueckers, a junior who took the college basketball scene by storm her freshman season at UConn, will have three years of eligibility remaining following the 2022-23 campaign.

In addition to earning just about every national accolade imaginable (including the Nancy Lieberman award, Naismith player of the year and the Wooden award), the Minnesota native became one of the most prominent faces in the sport as the NCAA loosened regulations surrounding name, image and likeness opportunities, something she will continue to be able to take advantage of.

Bueckers’ ACL tear was a devastating blow for the point guard after she’d missed 19 games across November and February last season with a tibial plateau fracture and lateral meniscus tear in her left knee. She returned in time for the NCAA tournament, where she helped propel 2-seed UConn to its first national title game appearance since 2016, where the Huskies lost to No. 1 overall seed South Carolina.

Bueckers said that prior to her ACL tear, she was feeling “really good” physically and was eager for the season to start. Then came the fateful pickup game in Storrs on Aug. 1.

“I was going full speed and I sort of tried to come to a stop and there was some contact, not a lot of contact, but it just kind of gave out,” Bueckers said. “I knew it was bad. I felt a pop. And then I went to the training room and I was extremely frustrated. I didn’t know how serious it was, but I knew something was wrong.”

An MRI later confirmed the ACL tear, and she underwent surgery later that week to repair it. Though it happened in the same knee as last year’s injuries, Bueckers said the incidents were “unrelated.”

The point guard said rehab is going well and that she has recently been able to walk a lot more. She has been biking, got cleared for chair workouts and will soon be able to do work in the pool.

“Last year, I got hurt, but there was always the reassurance that I could return and I could be back in the same season,” Bueckers said. “This just really makes me never want to take things for granted again, live in the moment, don’t think too far in the future because you never know what could happen. So just living every day to the best of my ability, being thankful to God that I wake up every morning.”

Bueckers shut down any hope of her making a speedy comeback in time to appear in the 2022-23 season.

“I really just want to be 110% healthy before I ever play basketball again,” Bueckers said. “Just because I never want to take a break like this again, ever in my career.”

She also hopes to act as a players’ coach during the season to support her teammates — if she doesn’t take coach Geno Auriemma’s spot first.

The Huskies will search for a new identity after also sending off three players to the WNBA. Helping take up the mantle will be a mix of upperclassman returners, promising underclassmen (headlined by former No. 1 overall recruit Azzi Fudd) and a slew of newcomers, including three freshmen and a graduate transfer.