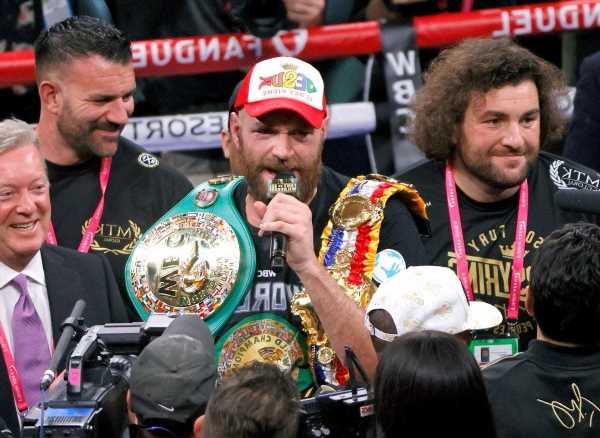 Tyson Fury has tipped Joe Joyce to be a future heavyweight world champion, according to promotor Frank Warren.

Joyce is undefeated in 13 fights and could be in line for a title shot as the WBO’s mandatory challenger. Champion Oleksandr Usyk is set to defend his belts in a rematch against Anthony Joshua early next year which would force Joyce to have to wait for his opportunity.

The 36-year-old is coming off a knockout win over the previously unbeaten British heavyweight Daniel Dubois and a stoppage of veteran Carlos Takam in July, and WBC champion Fury has identified the ‘Juggernaut’ as a future threat in the division.

“Tyson said that he’s the best one out there,” promoter Warren told Sky Sports. “That’s what Tyson’s opinion was.

“Can he go all the way? Yes he can. He’s got good ticker, a big heart. He’s strong, he walks forwards, he is the ‘Juggernaut’.

“Him and Usyk would be a great fight. He could hurt Usyk, he’s a big man. Could he beat Usyk? Yes. He fancies it and I fancy it.”

Fury is yet to announce his next fight following his knockout victory over heavyweight rival Deontay Wilder last weekend.

The WBC champion could face challenger Dillian Whyte if the London fighter beats Otto Wallin later this month, but the ‘Gypsy King’ has hinted at retirement after questioning the “need” to fight following his title defence in Las Vegas.