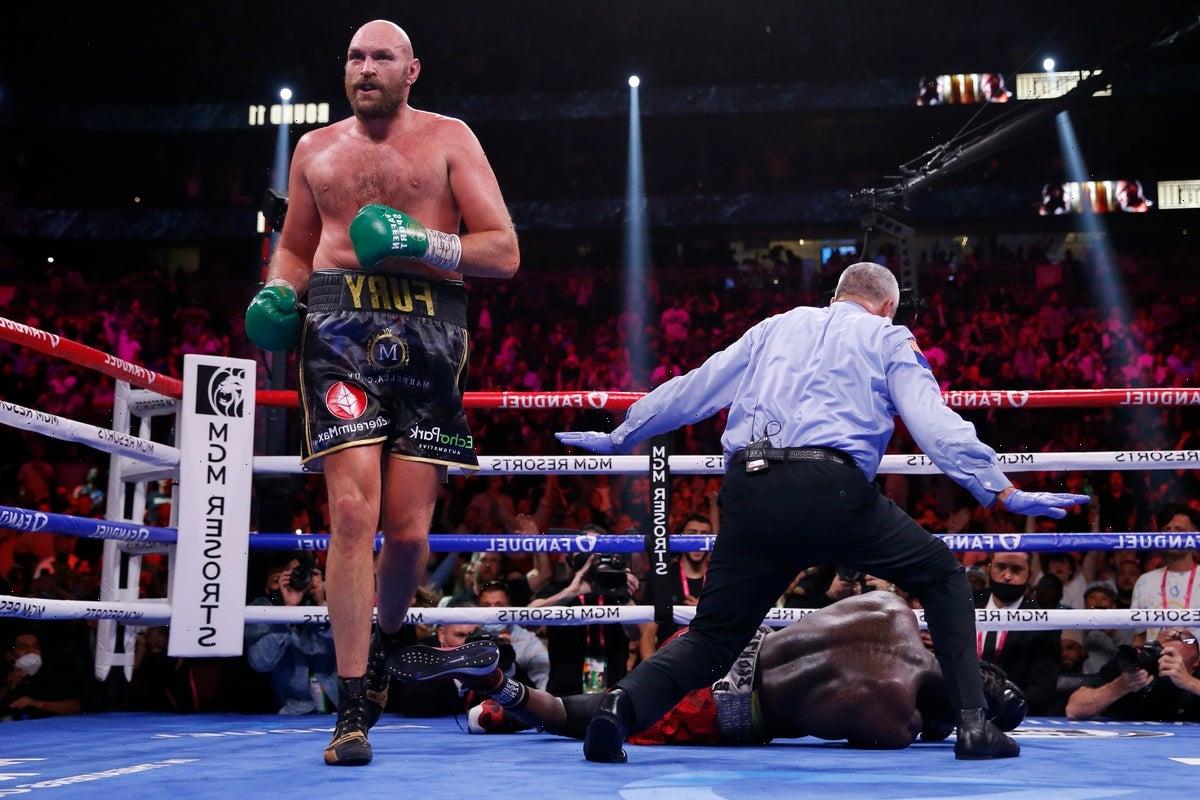 Tyson Fury believes he has left no doubt that he is the best heavyweight of the era after rising from the canvas twice to retain his WBC title with an 11th-round knockout of Deontay Wilder in an all-time classic.

In a breathtaking and bruising third contest between these combatants at the T-Mobile Arena in Las Vegas with five knockdowns in total, Fury showcased tremendous fortitude to come out on top and close the book on this rivalry.

Wilder hit the deck first in the third round and looked to be saved by the bell on unsteady legs and yet after just a minute’s respite, he immediately turned the tables with his straight right hand to twice topple Fury.

Fury’s unbeaten professional record appeared to be in jeopardy but he re-established control as Wilder tired in the middle rounds, perhaps fatigued by how much energy he had expended in trying to get the knockout.

He remained a live threat even as it became evident Fury was on top. Indeed after sinking to his knees in the 10th after Fury evened up the knockdowns, Wilder finished the round strongly and momentarily buzzed the Briton.

It was the final act of defiance from Wilder, though, as he was sent crashing face first to the floor for the third and final time in the penultimate round by a savage right to the temple.

Referee Russell Mora immediately called a halt to the contest to leave Fury (now 31-0-1, 22KOs) facing questions afterwards about where he sits in the pantheon of greats in boxing’s blue-riband division.

He said at the post-fight press conference: “When it comes down to it, when I have to pull the chips out, every time I’ve delivered. I can only be the best of my day, I’ve done that: I’m the best fighter in my era.

“I actually feel sorry for all these guys who have had to fight me because I go in the dressing room and I’m not nervous, it’s a boxing fight to me, but they’re fighting the fighter of the generation, that’s for sure.

“Without sounding too sharp and clever, I believe that I could beat any man in history, any man born I believe I’ve got a really good chance of beating him.

“There’s always a way of beating Tyson Fury and I’ve always said it very, very clearly: you’ve just got to knock me spark out, and if you can’t do that I’ll win. I can only be the best of my era and I’m definitely that.”

After a controversial draw in their first fight in December 2018, Wilder was flattened 14 months later, surrendering his title and left a bloodied and broken mess in a one-sided display of power from Fury.

Wilder made a number of excuses afterwards, from the weight of an elaborate ring-walk costume draining his legs to the unsubstantiated claim that Fury had loaded gloves, while he switched trainer to Malik Scott this time.

While few observers gave him any chance in this third and final meeting, he matched Fury’s grit, hanging on on several occasions prior to being knocked out despite seemingly being past the point of no return.

He may have contributed to one of the great heavyweight fights but Fury was left distinctly unimpressed by his foe’s attitude afterwards, saying the Alabaman rejected the opportunity of a post-fight show of respect.

Fury said: “I thought we fought it all out there and all the allegations that they made towards me throughout the build-up of this fight, and we fought like two warriors in there.

“I went over to shake his hand and say well done and he was like ‘No, I don’t respect you’. How can you say I’ve cheated when you know in your own heart and full team knows that you just got beat fair and square.

Having established himself as the better fighter than Wilder, talk quickly turned to what is next for Fury, with new WBA, IBF and WBO heavyweight champion Oleksandr Usyk the obvious candidate.

But Fury said: “We’ll see. I’ve just earned a well-earned break from everything.

“I’ve been home two weeks out of the last six months, so before I start thinking about fighting other men, I’m going to bask in this victory because this was one of my greatest wins.

“This has been a well-deserved victory and I’m going to enjoy it, I’m not thinking about anything else.”