Israel Adesanya shocked the world when he made light work of Australia's UFC middleweight champion Robert Whittaker last year – but there was one person who wasn't surprised.

"I'm not shocked at how quickly this has happened, but we're about 10 months ahead of schedule," he said. 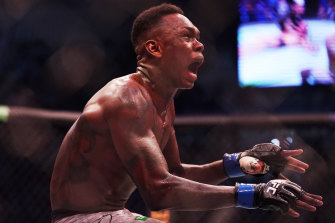 The Nigerian-born, Kiwi-bred Adesanya, who proudly represents both his country of birth and the place where he and his family re-settled when he was a child, has his next challenge this weekend – against Cuba's Yoel Romero, one of the most feared competitors in the division.

Adesanya is well aware of Romero's knockout power and strong chin, but he's not too concerned about being stopped.

"I haven't gone back over any old fights of his – I've seen some over the years, and maybe I'll go back and watch a bit but a couple of rounds is all I need to see."

"I know definitely in the later rounds he doesn't really have much." 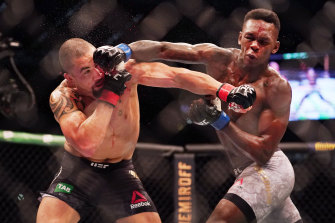 That's a fair point. In Romero’s interim title loss to the Whittaker, the Cuban won the first two rounds before losing the final three.

"People should be very excited. This fight is something that I think the fans are going to be shocked by, by the way I make him look on Saturday night."

While Adesanya is hoping the fight doesn't go the full five rounds, he knows one mistake could snap his unbeaten streak as a professional mixed martial artist.

"[Romero] lulls people into a fall sense of confidence, and then in a second you realise it's over," he said of his opponent.

While the champ is feeling some pressure, he said it's there regardless of whether you've ever tasted defeat before or not.

"It can be like that even without an undefeated streak – your next fight is always your biggest fight, it's the most important fight."

It's a tale as old as time in combat sports to see a fighter get complacent once they reach the top of the mountain, but Adesanya is trying to stay the course.

"I'm just trying to keep the same energy, but everything around me as changed a lot. A lot of people are seeing me differently, certainly, people outside my circle are," he said.

"Everyone wants to see the champ, but I expected all this, I was prepared for it."

After this, he wants to defend his belt a couple of more times before moving up a weight class to challenge Jon Jones, the pound-for-pound best fighter in the world. Jones, like Adesanya, has never been beaten, and many are salivating over the prospect of a mega-fight where it's not clear who would win.

But what is for sure is that his impact in New Zealand has given the sport a huge lift.

"Just look at the gyms in Auckland – they were already packed, but now they're filled more than ever before."