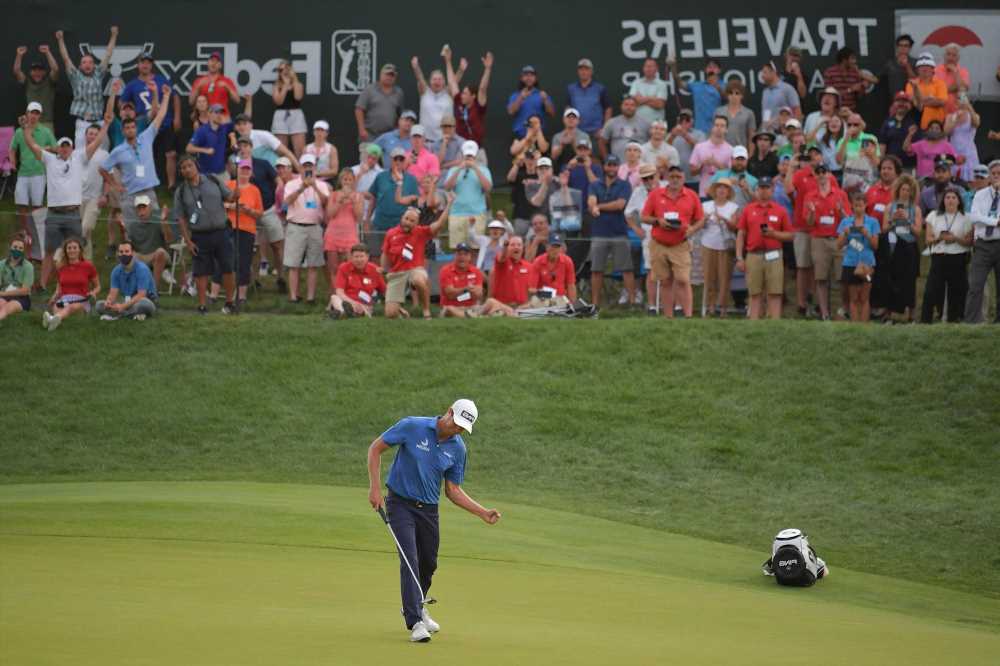 John Pak a cut above despite missing weekend at Travelers

Jon Rahm's anger management promise helping him in so many ways

Misery has become a thing for Rory McIlroy, Louis Oosthuizen

CROMWELL, Conn. — It doesn’t have the aura of exclusivity of Augusta National.

It doesn’t have the 100-plus-year history of the Old Course at St. Andrews.

It doesn’t have the stunning ocean-view beauty of Pebble Beach.

It doesn’t have an iconic famous hole like the island green of TPC Sawgrass.

Yet year after year, TPC River Highlands, the host course for the Travelers Championship, is as much the star of the show as the best players in the world who play it.

Sunday’s final round of the Travelers was no exception. It did not disappoint. It was a roller-coaster ride, leaving a lot of players queasy, not the least of which was three-time winner Bubba Watson, who spit up the lead on the back nine by going 6-over-par on his final five holes.

In the end, Harris English won it on the eighth playoff hole, a tournament record and the second-longest playoff in PGA Tour history.

The PGA Tour and the USGA can have their tournament courses that are defined by brute length requiring brute strength from players in order to survive, courses where it’s difficult for players to make up ground on the leaderboard because birdies become as easy to come by as runs for the Yankees of late.

Give me TPC River Highlands, thank you. It’s a veritable golfers’ playground whether you’re a pro or a 15 handicap, a place where birdie and eagle opportunities reside all over the course, yet so, too, does trouble.

Is there a sporting event more boring to watch than a golf tournament where the course is so difficult it makes is almost impossible for those chasing the lead to make up a lot of ground?

TPC River Highlands is not that course — as evidenced by the fact that in the past 12 Travelers Championships, only three 54-hole leaders (Chez Reavie in 2019, Jordan Spieth in 2017 and Freddie Jacobson in 2011) went on to win.

Does that mean the course is too easy?

Not if you ask the 16 players who’ve held at least a share of the 54-hole lead in that 12-year period, only five of whom managed to break par in the final round.

Volatility is exciting in sports. Volatility is sexy. If we praise players for their thrilling play, TPC River Highlands should be praised for producing thrills every year.

It’s no coincidence this tournament produces drama every year. Remember Jim Furyk’s 58 in 2016, the lowest PGA Tour round ever recorded?

Leishman was that “someone’’ in 2012 when he won the Travelers, beginning the final round tied for 20th and six shots out of the lead held by Brian Davis and Roland Thatcher.

“It’s just a really fun golf course, because if you hit good shots you can give yourself a lot of chances for birdies, but if you’re just a little bit off it kicks your butt,’’ Leishman said. “You can make bogeys from nowhere it seems like. I think that’s the great thing about it.’’

You can make birdies from everywhere, too.

When Kevin Streelman won the Travelers in 2014, he birdied the last seven holes in the final round to do it.

But TPC River Highlands, despite being just 6,807 yards in length (about 1,000 yards shorter than Torrey Pines for last week’s U.S. Open and Kiawah Island for last month’s PGA Championship), is not a pushover.

Brawny Bryson DeChambeau, for example, didn’t eat it for breakfast, failing to make a Sunday charge (he shot 70). Phil Mickelson, who craves birdies like many of us crave caffeine in the morning, finished a very modest 1-under for the week.

“I think it’s a great test of golf,” Justin Rose said after shooting 63 on Friday and before shooting 74-69 on the weekend.

Kevin Kisner, who shot 29 on the back nine Sunday after shooting 40 on the back Saturday, described the course best when he said it has “a lot of eye candy.’’

Give me eye candy any day over a bland bowl of broccoli.