Bernard Tomic’s Australian Open lasted a tick over two hours. The Australian lost to Marin Cilic in the first round in straight sets.

Tomic's desire has not always been assured in tennis, but a lack of effort or grit was not responsible for this loss. 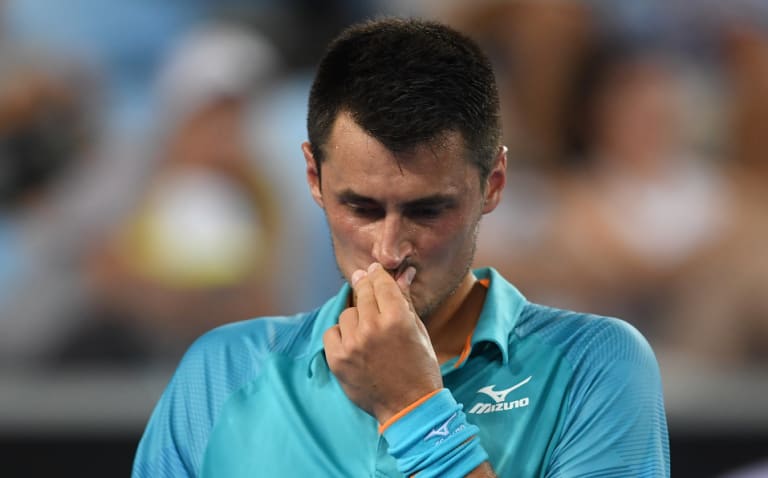 No joy: Bernard Tomic made an early exit from the Australian Open last night.Credit:AAP

Tomic tried to hang in – he earned his first break of Cilic’s serve when the Croatian was serving for the match and he forced the third set to a tie-breaker – but the 30-year-old's class prevailed. Cilic struck 56 winners to Tomic’s 33.

Cilic was the sixth seed and simply the better player on the night. He scarcely gave Tomic a look-in.

"He played really well, unbelievable player. Last time I won but I played well. Today not so good he played well," Tomic said.

"He is a world class player, a grand slam champion and been so high last five or six years  – in the top eight. If I don't play well I am going to lose because these sort of players are always playing well and today he played really well.

"I was happy to be back, but it's difficult playing a player like Marin first round. I tried to take it to him but he was playing on top of me the whole time and really there was nothing I could have done.

"Once I get back into good momentum in the next six months or a year it will allow me to play better … I don't want to play too much because there is better things to do than play tennis so we will see."

Tomic's match was not shown by Channel Nine with Andy Murray and Roger Federer both on court.

"I think Federer and Murray have priority over me. I think they do," Tomic laughed when asked if he was surprised to be overlooked.

Tomic’s game is like three tortoises racing a hare. It is not a light-and-shade style, it is light then more light then a little shade, then more light. The softness of his hands taking the pace of the ball makes his opponent work harder than normal to generate speed and rhythm. Cilic had the patience to find both.

“He is tricky, he has unbelievable touch, he jerks you around the court. He started to play great, so it was great to finish off in the third set tie-break,” Cilic said.

Cilic broke Tomic in the sixth game, after Tomic had resisted three break points. Cilic was then not headed.

The Croatian applied the pressure and permitted Tomic few looks at him on serve – indeed for much of the game the time violations for his maddening ball bounce routine were as much a threat as anything.

Tomic palpably lifted in the third set with a few big points at the right time when Cilic was pressing with three match points. Tomic broke Cilic’s serve and forced the match to a tie-breaker.

Earlier, John Millman defeated world No.80 Federico Delbonis. Having toiled through the first three sets, the 29-year-old then made short work of the Argentinean, winning the first five games in the fourth set before settling with a 6-3 3-6 7-6 (7-3) 6-2 triumph.

IT has been confirmed that Big Brother will return to our screens on the 14th of June for its 20th...