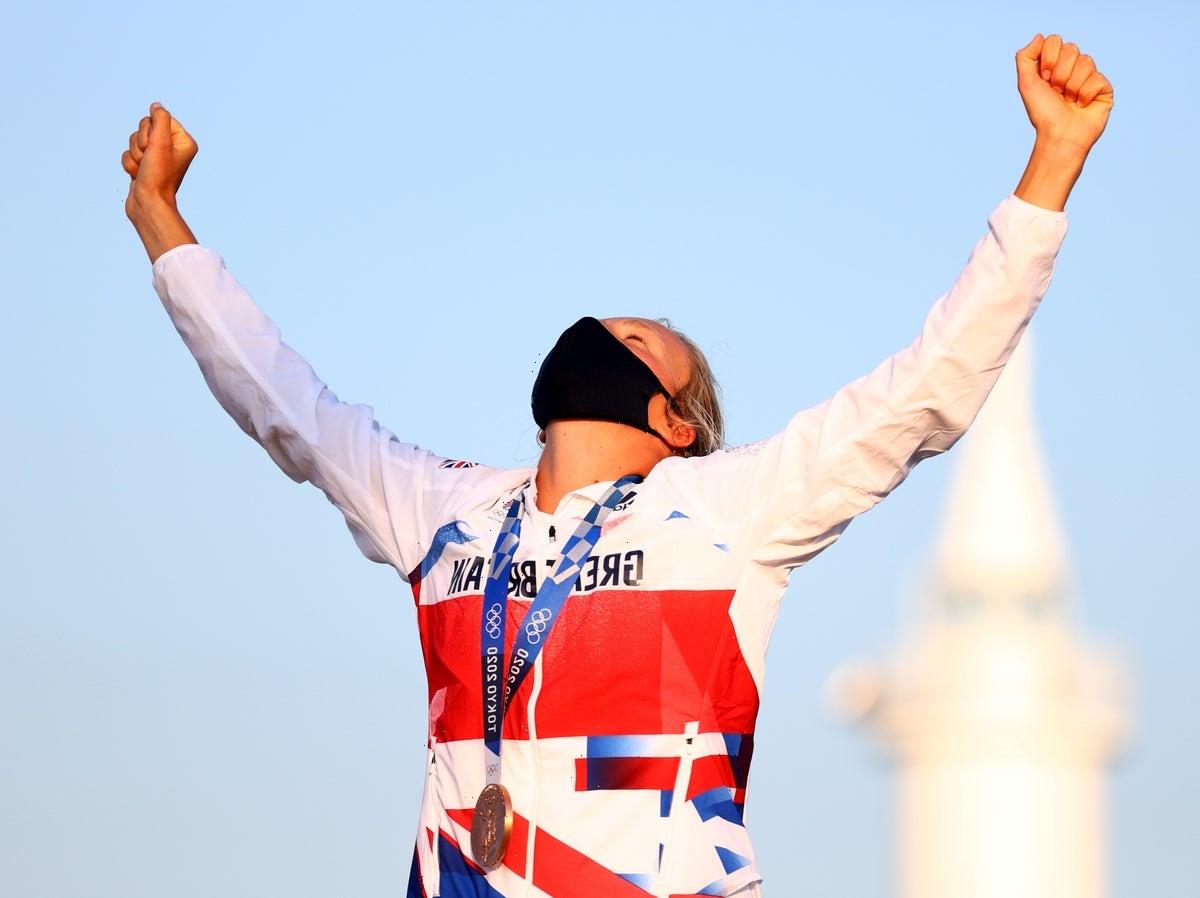 Some Olympic medallists get a golden postbox, some get an MBE, some get an invite to I’m A Celebrity – Emma Wilson has a more humble request.

Wilson claimed Team GB’s first sailing podium – and a first women’s windsurfing medal since Bryony Shaw in 2008 – with a second-place finish in the double points medal race on Sagami Bay.

Her mother Penny is something of a trailblazer in the sport, appearing at the 1992 Olympics, when women’s windsurfing made its debut, and again four years later in Atlanta.

She finished sixth and seventh and had the road that leads down to Christchurch Windsurfing Club – where her daughter first took to the water – named after her.

What honour gets bestowed on her daughter remains to be seen.

“I wouldn’t mind my own road… if there’s one available,” Wilson joked.

“My mum didn’t enjoy her Olympic experiences. She had a lot of pressure on her as she was triple world champion coming in. I was able to fly under the radar.

“I didn’t feel too much expectation and I just tried to keep smiling and have fun.”

Wilson has been the picture of consistency all week – rarely out of the top five in the first 11 races of the regatta. But she needed to finish two positions clear of China’s Yunxiu Xiu and ahead of France’s Charline Picon to take gold.

However, her French rival sailed clear to win the final race and snatch silver, just ahead of Wilson and Xiu, who took gold.

But after fourth-place finishes at the World and European Championships – and here in Enoshima at the Olympic test event two years ago – this felt good.

“I’m so sick of being the annoying little one that always comes fourth, it doesn’t get much worse than that,” she said, her race live on Eurosport and discovery+. 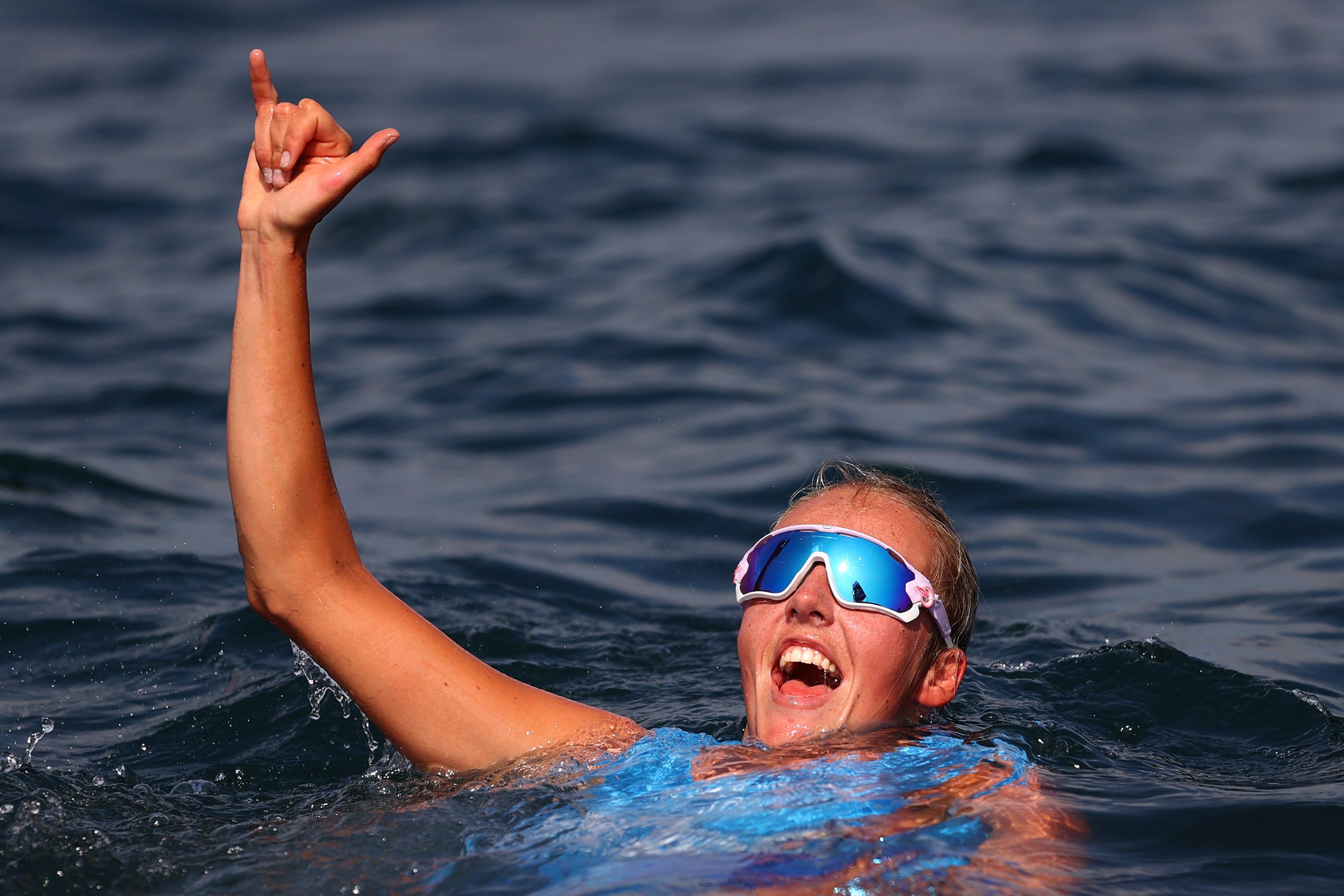 “I’ve come fourth so many times, it means so much to finally get on the podium and to do it at the Olympics is even better.

“Of course you want to win a gold medal but I’ve many more years to come and I hope to be back. I just want to enjoy this moment, not many people get a medal at the Olympics and I’m so grateful.

“Those conditions were so physical and I gave it everything, I’m super happy. I just emptied my body out there.

“I didn’t believe I’d be the first on the team to get a medal but it’s cool and hopefully the others get one, too.”

Wilson will need to learn some new skills if she is to seek an upgrade in Paris; a new-look foiling windsurfer, which rises above the water, is being introduced for the regatta in Marseille.

However, first she can enjoy this moment, while the British team boast an armada of medal chances in the days ahead, with their tally of two golds and one silver in Rio ready to be eclipsed and a record six medals from Beijing under threat.

Giles Scott is looking strong in the defence of his Finn title, while five other British crews are in medal places in their respective regattas, including defending champion Hannah Mills, and new partner Eilidh McIntyre, who are second in the women’s 470 fleet.

They say a good sailor prepares for every eventuality and the British team made their home here in Enoshima long before Covid hit, indeed they’ve had a base in Marseille – venue for the Paris 2024 regatta – for two years already.

Such are their connections, they’ve been able to secure their own pontoon, which belongs to a local restaurant, meaning they could come to the venue by boat each day, rather than take a long coach journey.

“Getting one away is quite important for the team,” said British Sailing’s Olympic manager Mark Robinson. “When we knew she was guaranteed a medal, the spirit in the team was pretty powerful.

“The target is four to seven medals and the trick is: Can we get the golds, can we get the colours? We are always about being the top nations and that means getting the most number of golds, it’s just getting harder.

“If I could get two or three gold medals right now, I’d take that. We’re in the hunt in six or so fleets, but you can never be quite certain.”

Stream every unmissable moment of Olympic Games Tokyo 2020 live on discovery+, The Streaming Home of the Olympics.