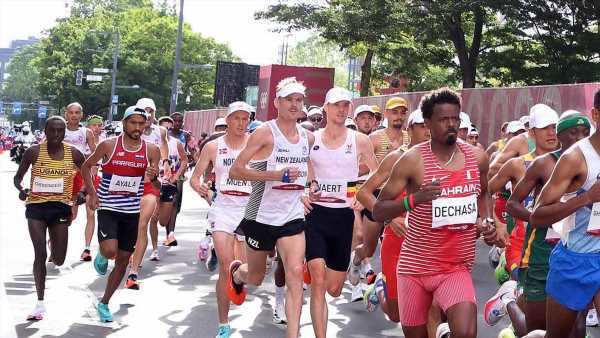 All the New Zealand action from the Tokyo Olympics.

Here’s all you need to know about today’s action (Sunday, 8 August).

Full Kiwi schedule below. Click on a name to see athlete’s bio, upcoming events, past Games performance and medal chance.

Short and sweet for the New Zealand athletes on the final day of the Tokyo Olympics, if you can call a marathon short. Just four Kiwis will take part on the last day beginning with Zane Robertson and Malcolm Hicks in the men’s marathon which starts at 10am.

Both would be big outsiders to add to New Zealand’s impressive medal tally with world record holder and defending Eliud Kipchoge rated as a chance to an another Olympic gold to his CV. Rival Lawrence Cherono hasn’t raced since December so it’s a mystery what form he will be in.

All eyes then go back to the velodrome where Holly Edmondston competes in the women’s Omnium from 1pm and Callum Saunders races in the quarter-finals of the men’s Keirin at 1.29pm.If Saunders makes the final he’ll be racing for a medal at 3pm while Edmondston’s fourth and final event is at the points race 3.25pm which will close the action for New Zealanders in Tokyo.

At 1pm the New Zealand Olympic Committee will announce who will carry the nation’s flag into tonight’s Closing Ceremony. Tokyo will officially begin to turn off the lights and shut the doors from 11pm.

The Herald will have live updates running from 10am, while you can catch all the action on Sky Sport. Every event on Sky can also be watched via streaming on Sky Sport Now or Sky Go.