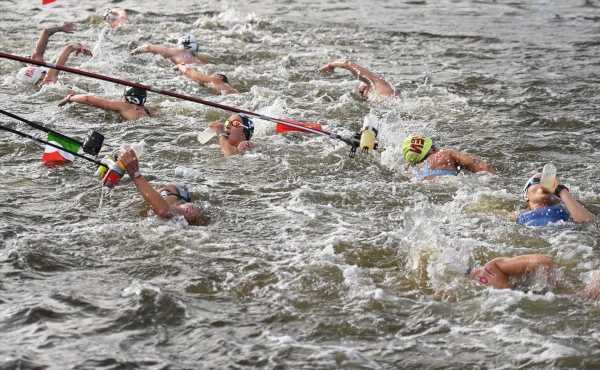 Competitors take refreshments at a feed station in the women’s 10km marathon swimming event during the Tokyo 2020 Olympic Games at the Odaiba Marine Park in Tokyo on August 4, 2021.

For athletes competing at Tokyo 2020, fuelling themselves precisely for optimum performance is an essential step on the path to glory.

But not every competitor in the games needs the same nutritional plan.

While champion swimmers like Great Britain’s Adam Peaty power their training and competitions with an 8,000 calorie per day diet, the same is not true for all disciplines.

It is the endurance athletes, such as cyclists, swimmers, marathon runners and rowers, who top the calories consumed list with between 3,000 and 8,000 a day, because of the distances they cover, according to US Olympic nutritionists before the London 2012 games.

Team sport athletes, in sports such as basketball and soccer, consume anywhere from 3,000 to 4,500 calories a day, while sports such as sailing and kayaking require fewer calories at 2,500 to 3,500 per day.

The numbers vary within sports, and female and male athletes also require different amounts, while some athletes have to cut weight before their events, such as in wrestling, taekwondo and lightweight rowing.

In those events, athletes may reduce their calorie intake to between 1,200 and 1,500 calories a day, to make the weight before an increase to recover and prepare for competition.

Sports such as gymnastics and sprinting rely on the anaerobic energy stored in the athlete’s muscles and do not therefore require the carb loading necessary in other sports.

Dan Benardot, a professor at Georgia’s Emory University, was the nutritionist for the 1996 Olympic gold medal winning US women’s gymnastic team in Atlanta, and the 2004 marathon running team in Athens.

He says that it is essential for elite athletes to get “fuel and hydration” exactly when they need it and not be too hung up over the number of calories they consume in a 24-hour time period.

“The athletes in Tokyo must be able to perform from start to finish in their event, whatever it is. Athletes tend not to eat enough and they tend not to drink enough.

“It is not really about the amount of calories that you take in over a 24-hour period. Fuel as you need it is the key.

“Counting calories in and out in real time is what is important. It is about what the body uses and needs back in real time.”

And he compared fuelling an Olympic athlete with a car on a road trip.

“If you tried to drive from Los Angeles to Chicago and only fill up with gas when you get there, you would have a problem, and it is the same with high-performance athletes. It is about calories going in and coming out at the right time.”

While marathon runners start their competitions “super-hydrated” and drink every 5km to maintain their “fluid state”, he says it is entirely different for sprinters.

They instead are relying on the energy stored in their muscles, known as adenosine triphosphate, to propel them down the track at more than 23-miles-an-hour.

“They want to have it maxed before the race because it only lasts 5 to 8 seconds and the winner over 100m is the sprinter who who slows down the least in the last 2 seconds of the race.

“They do not want to have anything in their belly, no excessive fluid and not to do anything that causes a stressed mental state as that burns carbohydrate.”

He also said that recovery between heats and races is a key factor in maximising performance.

“Almost every event in the olympics, except for the marathon, requires multiple heats to get to a final so recovery is extremely important,” he said.

“Athletes have to know how to recover, and not miss their window of opportunity after they perform. It has to be done immediately in order to maximise it.”