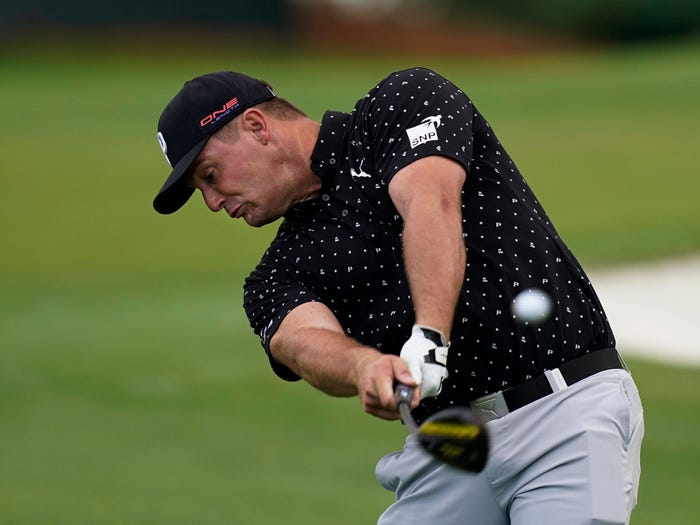 Bryson DeChambeau is heading into the 2020 Masters as the clear favorite to win his first green jacket, and on Tuesday, he got the seal of approval from none other than Tiger Woods.

Woods praised DeChambeau for his transformation while speaking with reporters on Tuesday ahead of the Masters.

"Bryson has put in the time. He's put in the work," Woods said. "What he's done in the gym has been incredible. And what he's done on the range, and what he's done with his entire team — to optimize that one club and transform his game and the ability to hit the ball as far as he can in as short a span as he has — it's never been done before."

DeChambeau has been the biggest story in golf all season after returning from quarantine with some shocking new muscles that could drive the ball farther than any other player. DeChambeau's newfound strength allowed him to overpower courses and imagine angles of attack that other players couldn't dream of hitting.

With the distance he's hitting, DeChambeau is changing the sport like no player has since Woods first broke out onto the scene himself, though Woods acknowledged that his development was quite different than that of DeChambeau.

"I had speed in '97, and I hit it far," Woods said. "And as I got bigger and filled out and tried to get stronger, it was not to hit the ball further, it was to be more consistent and be able to practice longer. I actually got a little bit shorter as I got into my mid-20s and late 20s.

"What Bryson has done has been absolutely incredible, and we've all been amazed at what he's been able to do in such a short span of time. It's never been done before."

Woods' dominance in the early years of his career led to a number of courses, Augusta National included, to not so quietly embrace the idea of "Tiger-proofing," making certain holes longer in an effort to keep Woods from running away with every trophy that was up for grabs. Looking back at Woods' career, it's clear the plan was only mildly successful, at best.

While such dramatic changes have yet to be made by the golf world in response to DeChambeau, there's a chance that some are coming, including the possibility of changing golf balls in order to stop DeChambeau from over-powering the most iconic courses in golf.

Should DeChambeau run away with his first green jacket this weekend, don't be surprised if things start changing in the golf world. But regardless of what happens at Augusta National this weekend, it's clear that Woods has respect for the player that's revolutionizing distance the way he did in his early years.