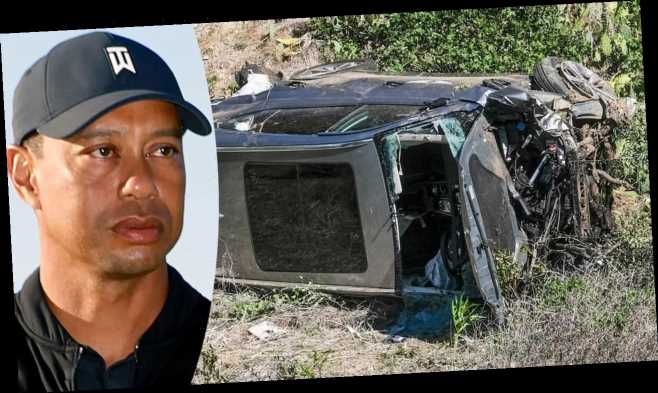 Tiger Woods’ crash report Wednesday revealed some stunning details one day after Los Angeles authorities cleared him of any punishment in the single-vehicle rollover wreck from February.

According to the report, obtained by TMZ Sports, there was an empty, unlabeled pill bottle near Woods’ 2021 Genesis SUV and he was described as “somewhat combative” when first responders arrived.

Police described the item as an “empty plastic pharmaceutical container” in the front pocket of a backpack in the brush near the wrecked vehicle, according to the New York Post. There was no label on the container and it was unclear what had been in it, if anything, police said. Authorities have said there was no sign of impairment when first responders arrived on the scene. The vehicle was a loaner.

Los Angeles Sheriff’s Deputy Kyle Smith interviewed Woods after the crash occurred, and he wrote in his report that Woods thought he was in Florida, according to USA Today.

“I then asked (Woods) if he is able to tell me about what happened regarding the traffic collision,” the deputy wrote. “(Woods) told me he did not remember being involved in a traffic collision. (Woods) thought he was currently in the state of Florida.”

Authorities added that Woods’ blood pressure was low due to shock from the crash.

His injuries were also detailed. A doctor who treated Woods initially said the legendary golfer was suffering open fractures affecting his tibia and fibula, injuries to his foot and ankle, and trauma to the muscle and soft tissue of the leg “required surgical release” to relieve the pressure.

Police also noted open fractures to his leg in the report.

Woods was initially brought to Harbor-UCLA Medical Center before being transferred to Cedars-Sinai and later back to his home in Florida.

Woods was driving at an unsafe speed when he wrecked his vehicle in the Los Angeles area in February, authorities said Wednesday. Woods was driving between 84 and 87 mph when he first made impact, Los Angeles County Sheriff Alex Villanueva said during a news conference. He was driving 75 mph when the vehicle hit a tree. The posted speed limit was 45 mph.

Authorities said there was no evidence of impairment when first responders arrived. Officials said Woods had no recollection of the wreck. Villanueva vigorously denied that authorities gave Woods special treatment in the case.

Los Angeles Sheriff’s Capt. James C. Powers said the black box in the vehicle revealed that Woods’ acceleration pedal percentage, which is the pressure applied to the accelerator pedal at the time of the crash, was at 99% at all of the areas of impact in the collision.

Woods released a statement after the press conference. He said he was grateful to those who helped him the day of his crash. He added he would continue to focus on his recovery process.