SAN DIEGO — In an exhibition game just before the season began on July 23, the Yankees pitching prospect Deivi Garcia started a game against the Philadelphia Phillies. In the words of Manager Aaron Boone, he didn’t look very good. He tossed 46 pitches to get five outs, coughing up seven base runners and two runs.

Yet even in that failed bid to make the opening day roster, something about Garcia impressed the manager, as it had others who watched him pitch in the past. “He looked unaffected,” Boone said.

Fast forward to Tuesday, and the Yankees have asked Garcia, 21, a rookie with one month of big-league experience, to start Game 2 of the team’s American League division series against the Tampa Bay Rays. Garcia was surprisingly selected over the veterans Masahiro Tanaka and J.A. Happ. A significant reason the Yankees trust Garcia, who will become the youngest starting pitcher in the team’s postseason history, is his unflappability.

“He just has that way and that demeanor about him,” Boone said before the Yankees won the first game of this best-of-five series, 9-3, on Monday night. “He’s not real affected by a successful outing or an outing where he struggles. Mentally and emotionally, I feel really good that he’ll be able to handle whatever the results are.”

Of course, the Yankees aren’t starting Garcia simply because he remains calm under pressure. He has also improved as a pitcher since July. He performed better than his regular-season earned run average of 4.98 might suggest. The Yankees won four of his six starts, and he threw at least six innings in each of those victories. Over all, he struck out 33 while walking six.

Listed at 5-foot-9 and 163 pounds, Garcia is notably small for a starting pitcher. But he employs a quick right arm and a deceptive delivery where he twists his body away from the batter to hide the ball until the last second. He also has an arsenal of pitches that spin at a high rate, helping to fool the batter, which lets him get away with a fastball that is typically about 91 miles per hour.

“He’s got a little bit of a sneaky delivery, and that’s definitely what plays to his advantage: deception,” Gerrit Cole, the ace of the rotation, said earlier this season.

But still, that doesn’t explain why the Yankees made the surprising decision to start Garcia ahead of Tanaka, normally a postseason stalwart. Boone declined to elaborate on the move, but one reason may involve the unique 2020 postseason schedule.

Gone are the traditional days off in the first three rounds of the playoffs, so if this division series goes the distance, the Yankees and the Rays will play five days in a row, taxing their bullpens. By spacing out proven starters — Cole, who went six innings in Game 1, and Tanaka, in Game 3 — the Yankees could theoretically keep their relief corps fresher. The Los Angeles Dodgers have employed a similar tactic. 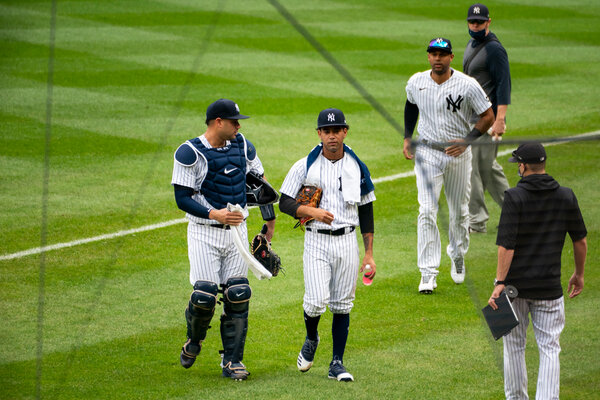 On Monday, Garcia dismissed the idea that he held an advantage over the Rays, a team that has never faced him. He said he had been preparing to start at some point during the playoffs, but he admitted it surprised him when Boone and Matt Blake, the pitching coach, told him of the Game 2 assignment.

“I was very happy and very proud of that, and I’ll try to do a good job,” he said.

In his brief major league career, Garcia has been a quick study. His two roughest regular-season starts were followed by instant improvements. After a subpar start the previous week, his seven-inning, two-run performance on Sept. 9 against the Toronto Blue Jays, a good-hitting team that also reached the playoffs, led to a Yankees’ win and stopped their 5-15 skid, their worst of the season.

“He pitches with confidence, like he already has 10 years in the big leagues,” Yankees catcher Gary Sanchez said last month.

Whitey Ford, in Game 4 of the 1950 World Series, is the only 21-year-old to start a Yankees postseason game. Garcia, who is 211 days younger than Ford was, will be the second to do so on Tuesday night. Garcia said that meant a lot to him and his family, who will be watching from the Dominican Republic. “I’m very grateful to God and the team for giving me the opportunity,” he said.

Even as he shot through the minor leagues, Garcia belied his age, with his pitching and his behavior. In an interview last year, he said he never wanted his age to be an excuse for why he couldn’t do something.

He said, “I want to show that I have a mentality that I can play with older people.” Now is his turn.