A day after opening the Sydney Olympic Games, Juan Antonio Samaranch rushed to the airport for a mercy dash back to Spain to be with his gravely ill wife. 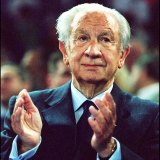 Devastated, Samaranch still felt he had an obligation to return to Australia for the last Games he would preside over as the Olympic movement's top official.

Less than four days after jetting out of Sydney Airport he would be back for the rest of the competition, which he would later declare as "the best Games ever".

Given his brief absence from the Games and still grieving upon his return, Samaranch only presented one gold medal throughout the entire extravaganza, to Australia's under-49kg taekwondo champion Lauren Burns.

Burns was just one of three female individual gold medallists the host nation produced in 2000, the others being Cathy Freeman and Susie O'Neill. 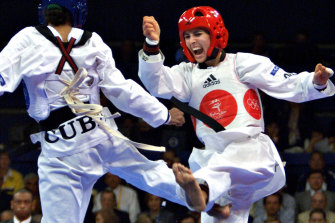 But Burns' gold medal would be etched into Olympic folklore for far more than Samaranch's cameo, stolen from her Melbourne home three years later, allegedly found in a city laneway and recovered in a clandestine operation by television network Nine (the owners of this masthead).

The taekwondo champion, the daughter of singer Ronnie Burns, dived into the motivational speaking circuit after her Olympic success. She had retired from the sport professionally when she walked off the mat having beaten Cuba's Urbia Melendez in the gold medal fight.

Each time she addressed school students, business leaders or community groups, her gold medal was there. By the end of 2003, Burns estimated it had passed through tens of thousands of hands.

But after returning home from overseas less than a fortnight before Christmas, she was greeted by her worst nightmare. Her concerned father and partner at the time were panicked at her Fitzroy North house, fearing the worst and hoping for the best.

"They were standing outside my house waiting and they're like, 'where did you leave that medal?' They knew where I used to keep it and it wasn't there," Burns says. "And I was like, 'just where I always have it'.

"I'm very trusting of it [when speaking to groups] because people love to touch it and feel it. It's got a lovely weight about it. I always trust it's going to come back because what are they going to do with it?"

But this time, Burns wasn't sure.

Her home had been the subject of a random break-in, with thieves stealing jewellery, CDs, even a pair of jeans – but devastatingly also her gold medal.

She didn't care about the rest of her possessions, only the one she had won a few years earlier, which required so much dedication, to the point where she even forfeited a chance to watch Freeman's history-making win at Stadium Australia fearing it would sap too much energy. 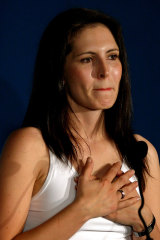 Lauren Burns at a press conference after her Olympic gold medal was stolen from her home. Credit:Eddie Jim

With the help of the Australian Olympic Committee, Burns launched an immediate campaign to have her medal returned. She fronted a press conference asking for its safe retrieval, while concessions were also being made to have another one manufactured in case her original wasn't returned.

"It was something that had felt a part of me," Burns says. "To not have it was unusual, but it made me a bit more philosophical that I had that win inside me. I thought, 'I might not have the medal, but I have that experience'. I felt really sad to not have it, but I tried to move beyond that."

Thankfully for Burns, someone else couldn't.

Less than a week before Christmas, the switchboard rang at Channel Nine's Melbourne headquarters. Newsrooms regularly receive random tip-offs, some are pursued and few lead anywhere of significance.

But the person on the other end of the line was about to deliver one of the biggest scoops of the year. She purported to have Burns' missing gold medal, a rolled gold snippet made for a pre-Christmas ratings spike.

The story had been a hot one all week in Melbourne media circles. It was before the social media era and the ability to break the story about Burns' gold medal being found was worth a holiday bonus alone.

Longtime Melbourne-based Nine sports anchor Tony Jones was in the newsroom when his chief-of-staff said there was a phone call he should probably take.

"I said, 'hello'. Then this woman says, 'look, I'm just letting you know I've found this medal'," Jones recalls. "I said, 'where did you find it?' One thing led to another and we agreed to meet in a car park at Coles in Smith Street, Collingwood."

There are more lavish places to do your shopping, but Jones had been around long enough to know the best gifts sometimes come badly wrapped.

He quickly alerted his cameraman, made sure he was wired for audio and then jumped in one of the station's news cars to meet the woman in the supermarket parking lot.

Once there, the anonymous phone caller hopped in the vehicle. She directed the pair to a nearby block of housing commission units, all the time with the Nine camera filming.

"Then two blokes came out and they had the gold medal in a plastic bag," Jones says.

If only it was that easy.

The only problem was Jones didn't have any cash on him.

"I had to go to the handybank and get out the $900 from an account my wife didn't know I had," he laughs, later confessing that night to how he accessed the money.

I always trust it's going to come back because what are they going to do with it?

Despite having the medal, Jones didn't think the story was complete. The medal was still wrapped in the ribbon Burns had left it in, but he didn't know where it had been found.

No problem. The cashed-up citizens were only too happy to show him the Melbourne laneway where they had recovered it from. So, the Nine camera descended on it to record some vision.

Meanwhile, Burns was counting down the days until a Christmas she was starting to realise would be without the possession she had worked her entire sporting career for.

Until her phone rang from Nine, who said they had a good lead on the hunt for the medal. There was no confirmation it had been reclaimed, just a promise there was some progress and they wanted to see her face to face.

"We didn't want to tell her because we wanted that element of surprise and then I just pulled it out of my pocket," Jones says. "She was pretty happy."

Says Burns: "I just felt so grateful, it was amazing. It was like being reunited with an old friend. I always felt like it was a boomerang. That was what I thought when I gave it out at talks. And then to have it back everything felt right.

"It was about a week [missing], but it felt like it was a month. I guess I was trying to come to terms I might not ever have it."

To this day, Burns says there have been no police charges laid over the robbery.

She's still on the speaking circuit 20 years on, juggling that with being a mother of two and finishing her PhD after previously completing a Bachelor of Health Science in naturopathy and nutrition. It has led her to write nutritional programs for almost a dozen childcare centres. 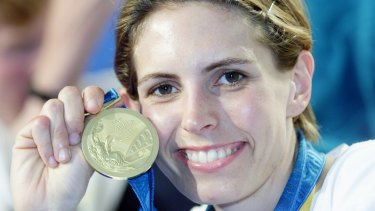 And as for that gold medal?

Well, it's inspired more than a few good samaritans over the years. Burns delivered a talk to Ruyton Girls' School in Melbourne shortly after her Olympic success, where a student and promising hurdler, Kim Brennan (nee Crow), was listening.

"She said, 'you inspired me so much about how a gold medallist has to think'," Burns recalls. "She said it changed her in terms of the mindset and commitment and how she had to think as a gold medallist. I thought, 'that's amazing. That's so cool'."

Brennan would switch sports to rowing after a serious leg injury ended her athletics career. She won her own gold in Rio four years ago, now knowing how Burns has felt all along.

"People get so excited when they see it and hold it so I still take it with me," Burns says. "And I don't want that [break-in] experience to change my relationship with the medal and what I do with it.

"But it was a pretty unusual story."

Sports news, results and expert commentary delivered straight to your inbox each weekday. Sign up here.