Ben Stokes is a cricketer lionised by the nation. It would be a travesty if he were not named the BBC’s Sports Personality of the Year, such is the impact he has had during 2019.

On the sports field he is a modern-day Prometheus. The glorious defiance of Australia and the dramatic tricks he pulled in the World Cup final at Lord’s in midsummer have taken cricket to a place it has not been this past decade – at the forefront of the country’s consciousness.

The best players, it is said, empty bars. On August 25 through his extraordinary endeavours with the bat in the pivotal third Ashes Test in Leeds, he filled them. Not only those belonging to cricket clubs, either. Up and down the land, people dived into pubs to witness history being made for the second time in a stupendous summer. He has made non-cricket lovers fall in love with the sport. 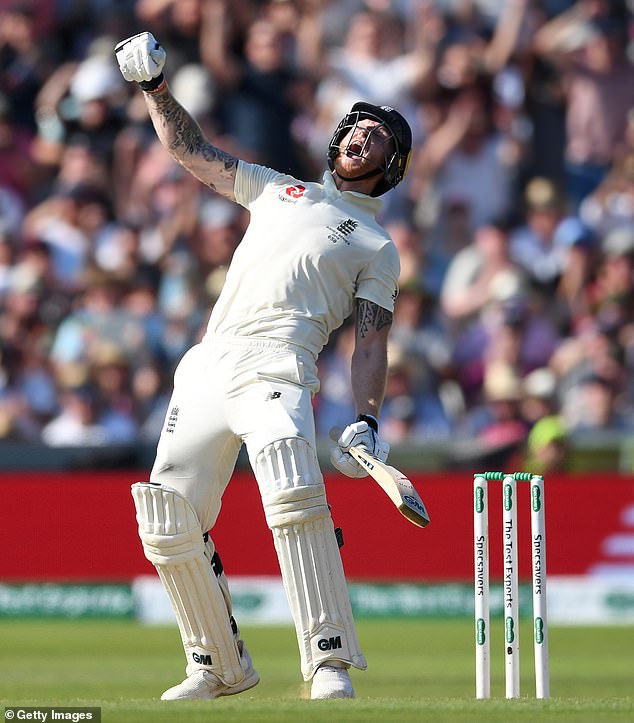 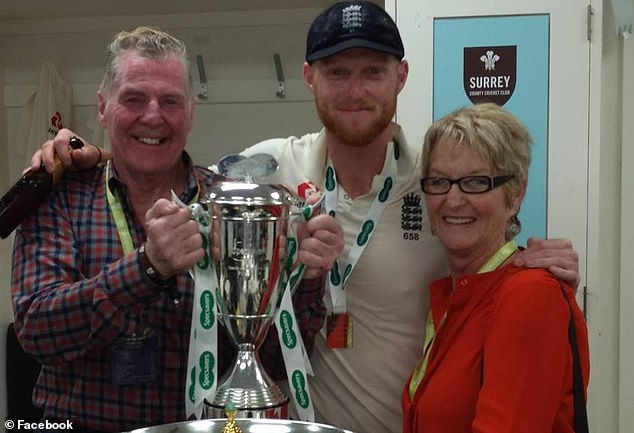 The England all-rounder pictured with his mother, Deborah, and his father, Gerard

In living rooms, on flicked the radios and televisions. With every sweeping blow of his blade, we were there with him. The feeling of connection familiar. After all, his astonishing 135 not out to single-handedly keep the Ashes alive came only six weeks after more than eight million TV viewers were left spell-bound by that other epic unbeaten innings, of 84, against his native New Zealand.

As the ghost writer of a soon-to-be-published memoir of Stokes’ summer, my own connection runs a little deeper. I have been given the privilege of re-living these momentous events through his eyes.

So much of this has been shared already by Stokes, a man of simple pleasures and a what-you-see-is-what-you-get persona. Like all of us, however, he has secrets.

One of them so gut-wrenching and raw that he has protected it in the manner he has his stumps during his annus mirabilis with the bat. Only an inner sanctum of friends have been let in on it.

Hence, the ire when The Sun chose to publish the gruesome details of his family backstory. A matter of public record it may be but in so doing they have badly misjudged the mood of the masses. They don’t want to see their hero felled in this way.

A confession here. I have known about this horrific episode for three and a half years, since I began working on Firestarter, the first book Ben and I penned together. 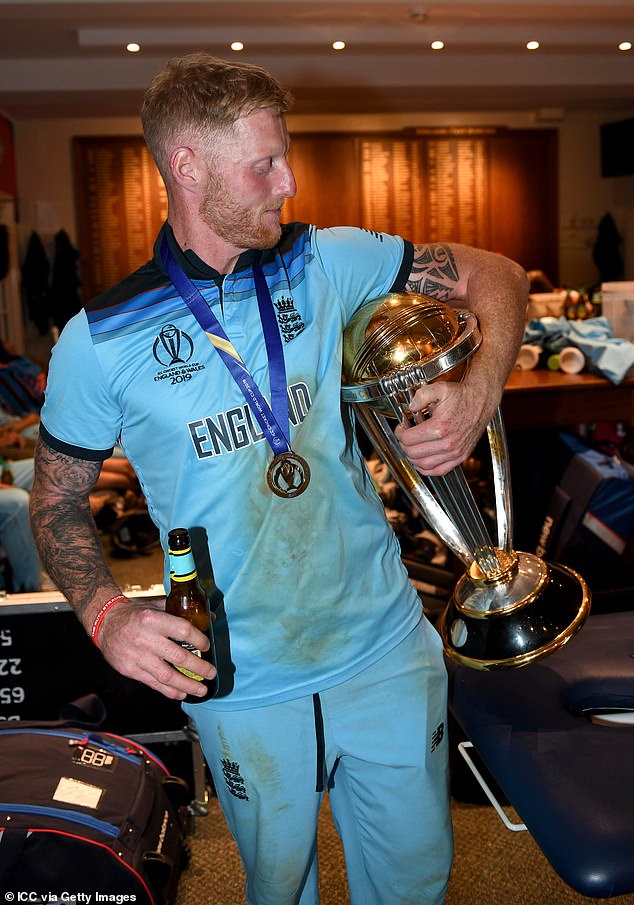 His greatest strengths are openness and honesty. Asked to put everything on the table at the start of the writing process, he did so, including the harrowing account of losing two siblings he never knew. Bound by the confidentiality of our working relationship this was not a story for me to take ownership of, or even disclose outside of our sessions.

As Ben pointed out, neither was this his story to tell. It was one that belonged to his mother Deborah, and one that has caused unfathomable private anguish for the past 31 years.

It was unsurprising that so many of the international team-mates he reveres retweeted his impassioned Twitter post yesterday. Joe Root is the Test captain, Eoin Morgan the limited-overs equivalent; make no mistake, however, Stokes is the dressing room leader. The one who, as the outgoing coach Trevor Bayliss has been at pains to stress throughout his four years at the helm, ’everyone follows.’

During his ascent to the status of the world’s premier all-rounder, Stokes has barely changed. Last Wednesday, the night before the final Test at the Oval, we headed out for dinner, having spent several hours that week in his hotel room producing the manuscript for our latest offering.

It felt like a meal before a club match, particularly when he announced that – for superstitious reasons – duck and calamari rings were off the menu. Only when served, does his musketeer mask slip. All for one and one for all it might be, 99% of the time. When it comes to food, he doesn’t do sharing. 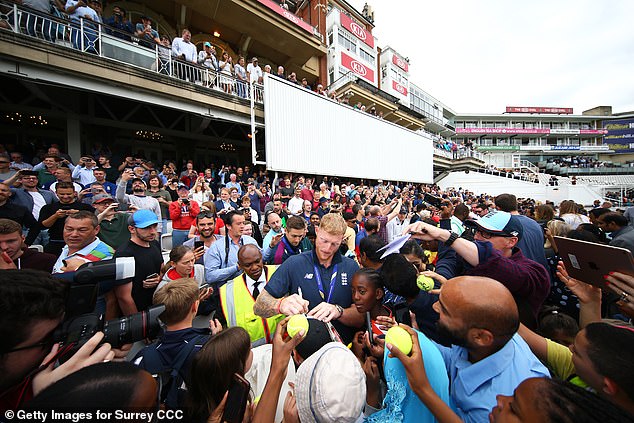 From experience, however, he is a great host. I spent so much time at his house in 2016 that his son Layton, then three, once announced upon my arrival ‘daddy’s cousin’s here.’

The Stokes household is warm and welcoming, laced with the chaos one associates with one that has two bustling children running about its walls.

Family is special to him. Family time precious. Given the demands on his time as a cricketer that holds a place in all formats for England and also happens to be the biggest foreign draw-card at the Indian Premier League it is limited. One of his favourite moments of this sporting summer, however, was seeing Layton perform at an athletics competition.

Since Stokes’s re-emergence 18 months ago from the late-night Bristol street fracas that punctuated a career comprising fleeting moments of greatness – Test cricket’s fastest-ever double hundred in Cape Town in January 2016 preceded his recent surge in form – he has set the standards.

Not only from a performance perspective. His desire to do more, to get every last ounce of his talent, transcended net practice (where he was already doing double sessions some days). Taking inspiration from Jos Buttler’s desire to undertake extra-curricular work with strength and conditioning coach Phil Scott, he took to the gym and extra runs outside of the official practice schedules. 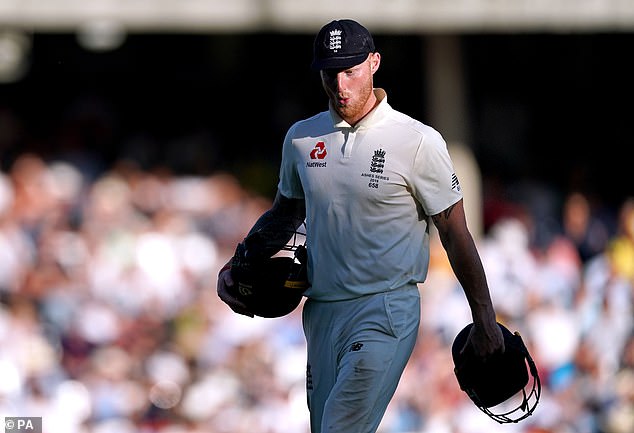 Soon 2km time trials were incorporated into the daily routines. The rest of the squad saw Buttler and Stokes and took note. Stokes now clocks under seven minutes. Significantly, though, others bought into the idea that if goals were to be achieved this summer this England team needed to be the fittest in history. The sight of Moeen Ali and Adil Rashid doing interval sprints around the boundaries of the Caribbean’s international grounds at the turn of 2019 was a telling sign of their all-rounder’s influence.

So what drives him? Some will assume his increased maturity as a cricketer these past few months represent a conscious effort to atone for a self-inflicted absence through the Bristol saga. That he is in some way trying to repair his image.

The truth, however, is that his focus has never wavered. His number one priority has seldom been personal accolades but winning matches for England. His body art speaks of this allegiance – a huge tattoo of three lions adorns his back. Of all the sanctions he faced from the ECB for his off-field conduct from September 2017 onwards it was the loss of the vice-captaincy that hurt most.

It also said something of his status that there were no histrionics from Buttler, the incumbent for the previous 12 months, when it was returned to him on the eve of the first Test versus Australia on August 1. This is undoubtedly to do with the strength of the bonds he forms. 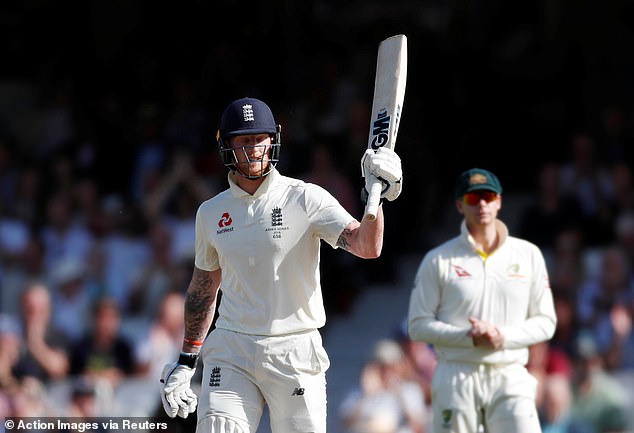 For all Stokes has done during this feelgood summer, he really didn’t deserve it to end like this

Few of the people who helped him on the way up have been lost by the wayside. After the World Cup victory, when he suddenly became the hottest commercial ticket in town his first thoughts were of rewarding the sponsors who stuck by him through his darkest days.

For the final at Lord’s, Stokes used his complimentary tickets as a thank you to those who had been there during adolescence. With his parents Ged and Debs watching on from the other side of the globe, he invited Michael Turns and Chris Youldon, former team-mates in Durham’s age-group sides.

When as a 15-year-old, he trekked cross-country from Cockermouth in Cumbria to Chester-le-Street, the Turns family would put him up for weeks on end in the school holidays. For Michael and his father Frank the tickets were payback. Along with Youldon, godfather to Stokes’ daughter Libby, they would join the post-match celebrations on the Lord’s pitch and in the home dressing room.

For all the pleasure Stokes has brought to so many others throughout this feelgood summer, he really didn’t deserve it to end like this.