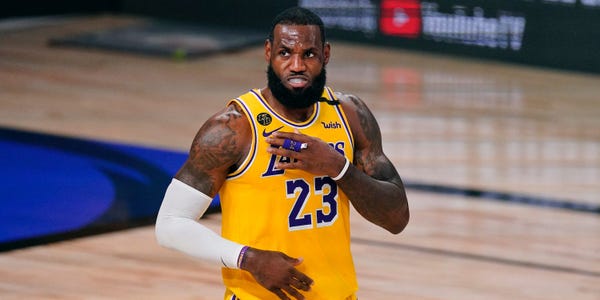 In the coming days, the NBA must answer a big question: when will the next NBA season begin?

The NBA's board of governors is reportedly pushing for a 72-game season that would start December 22 and played in home markets, not in a bubble.

A December 22 tip-off would compress the offseason into about five weeks. According to The New York Times' Marc Stein, December 1 has become a target date for training camps. Free agency would have to take place some time in between. The NBA draft is scheduled to take place on November 18. Training camps and preseason would unfold over three weeks.

And while there are benefits to a December 22 start, there is a hold-up: the players.

The Los Angeles Lakers won the championship over the Miami Heat on October 11. Training camps beginning on December 1 would give those two teams less than two months of an offseason.

"I think most guys, if you say they're starting in December, I think they're like, 'I'm not going to be there,'" Lakers veteran Danny Green said on "The Ringer NBA Show" podcast.

He added: "I just don't expect guys to want to be there or show up willingly."

Yahoo's Chris Haynes reported that there is a "substantial faction" of players pushing for a start on January 18, Martin Luther King Jr. Day.

Michele Roberts, the executive director of the NBA Players Association, told The Athletic's Shams Charania that the response from players to the plan has been negative.

"Given all that has to be resolved between now and a Dec. 22 date, factoring that there will be financial risks by a later start date, it defies common sense that it can all be done in time," Roberts told The Athletic. "Our players deserve the right to have some runway so that they can plan for a start that soon. The overwhelming response from the players that I have received to this proposal has been negative."

The two sides have until October 30 — though Roberts said she doesn't see that as a "drop-dead" date — to figure out their plans. There are numerous sides to consider and several things at stake.

A December start may be more financially beneficial

According to ESPN's Adrian Wojnarowski and Zach Lowe, the NBA lost $1.8 billion last year in total, which includes lost games, gate revenue, merchandise, and the fallout from its strained relationship with China.

The league made back about $1.5 billion in the bubble, which cost $190 million to run, according to ESPN. The league is facing dire financial consequences next season if they play the season without fans — 40% of their revenue, according to Commission Adam Silver.

According to Stein, the NBA projects that starting in December instead of January could be worth $500 million in revenue. A significant part of the December 22 start includes the NBA keeping its Christmas showcase.

Next season's finances are already complex, as the NBA reportedly plans to inflate the salary cap and the tax line artificially. Lowering those two numbers to match the lost revenue of last season would penalize teams who didn't plan to spend into the luxury tax and free agents who would enter an open market with little cash.

The Olympic and summer factors

The sooner the NBA starts its season, the sooner it can wrap it up and avoid competing with the NFL and the Olympics for a TV audience.

The NBA also wants to clear the way for its top players to compete in Tokyo, should the Olympics still be held. This is also important for international players in the NBA.

Players have been vocal about wanting summers off. Finishing in time for the Olympics also means the NBA can get closer to its traditional October-June schedule for the 2021-22 season.

The short offseason only applies to a few teams

As Green noted on "The Ringer NBA Show," the Lakers might be in the minority in their desire to push the season back.

While the Heat and the Lakers played until October 11, most other teams have been off since September. The Denver Nuggets and Boston Celtics finished playing on September 26 and 27. Second-round playoffs series were all wrapped up by September 15.

The bubble was a difficult experience for all involved, and leaving in September doesn't mean those players have fully recovered. But such a quick turn-around isn't unheard of — the 2016 Olympics squad won the gold medal on August 21, and NBA training camps began on September 27.

Some teams are raring to go

The eight teams that didn't play in the Disney bubble — commonly known as the "Delete Eight" — haven't played basketball since March 11, when the NBA shut down for the pandemic.

Those teams can have individual workouts in their training facilities, and they held mini-training camp bubbles.

But one assistant coach of a Delete Eight team told Insider that when it comes to next season, it's "the sooner, the better" because players are anxious to play. The same coach noted that players looked in-shape during the mini-camp, but their timing and feel for the game was off.

Additionally, six other teams invited to the bubble but didn't make the playoffs have been sitting around since mid-August. Those six teams have only played about three weeks of competitive basketball over the course of seven months.

The Athletic's Ethan Strauss suggested that if the NBA returns on December 22, it can front-load the schedule with the teams that haven't played in the longest. The early-season games could feature the "Delete Eight," teams that didn't make the playoffs, and teams that lost in the first round.

As Strauss suggested, keeping teams like the Lakers and Heat "on ice" may only grow anticipation for their season debuts later in the season.

Teams like the Lakers, Heat, Celtics, and Nuggets could then go slower in training camp to protect players from injuries from ramping up too soon.

There is a prevailing sense that money will win out

Ultimately, delaying the season caters to, at most, the eight teams that played beyond the first round of the playoffs.

Wojnarowski said on "SportsCenter" that he believes the players union will eventually concede to the NBA on beginning before Christmas.

"I do think they'll get there in the end. I don't think for the players association there is a lot of leverage on this issue … If there is $500 million more in revenue by starting before Christmas than starting in January and playing longer, well, then it ultimately makes sense for the players to go along with that."

Lowe put it more bluntly on ESPN's "The Jump."

"When money faces off against the purity of the game, money wins, and money is going to win this, too."