CLEVELAND — Several weeks ago, investigators from the N.F.L. sat down for an interview with Kareem Hunt, the Kansas City Chiefs star running back who was released by the team last week for assaulting a young woman at a Cleveland hotel and apartment building in February.

The investigators wanted to ask Hunt about an allegation that he had punched a man in the face in June at a resort in Ohio, near where Hunt lives.

Yet the questioners did not ask about the Cleveland incident, which, after surveillance video surfaced of the assault last week, has renewed intense public discussion of the league’s commitment to investigating and policing players’ off-field violence.

Although the N.F.L. said it was unable to obtain the video, the celebrity news site TMZ did and published it, showing Hunt shoving and kicking the woman, Abigail Ottinger, then a 19-year-old student at Kent State University, in a hotel hallway.

Neither of the episodes — the attack on Ottinger or the incident with the man at a Lake Erie resort — resulted in criminal charges against Hunt, or discipline from the league. But the narrow scope of the investigators’ recent questioning — at a time when the N.F.L. knew about the hotel attack but, it says, had not seen the video — points to the fits and starts of an N.F.L. inquiry that security experts who have worked with league say was less than rigorous and at times puzzling for a lack of a thoroughness.

Four years after another damning surveillance video, of the Baltimore Ravens running back Ray Rice punching out his fianceé in a hotel elevator, blindsided the N.F.L., the Hunt incident also reveals how the league continues to struggle with challenges similar to those that plagued the Rice investigation. The former F.B.I. Director Robert Mueller, whom the N.F.L. tapped to investigate its handling of the Rice matter, wrote in his report of that case that “the NFL should have done more with the information it had, and should have taken additional steps to obtain all available information” about the incident.

The N.F.L. said its investigators did not speak to Hunt about the hotel assault in February when it interviewed him this fall — in meetings than can sometimes last hours — because it was still,gathering evidence.

But an examination of the investigation shows the N.F.L. relied on the word of the Chiefs, who had a vested interest in keeping a star on the field, and did not press to to independently verify the account of the incident that Hunt gave to them. Those actions have left the N.F.L. trying to explain another high-profile stumble in its stated effort to take seriously accusations that its players have behaved violently, especially in cases involving women.

An N.F.L. spokesman, Brian McCarthy, said in a statement that league investigators had “multiple verbal conversations with Cleveland police officers and requested surveillance video immediately upon learning of the incident in February.” The league’s representatives also asked for any surveillance video from The Metropolitan at The 9, the upscale hotel and apartment complex where Hunt’s attack on the woman occurred. 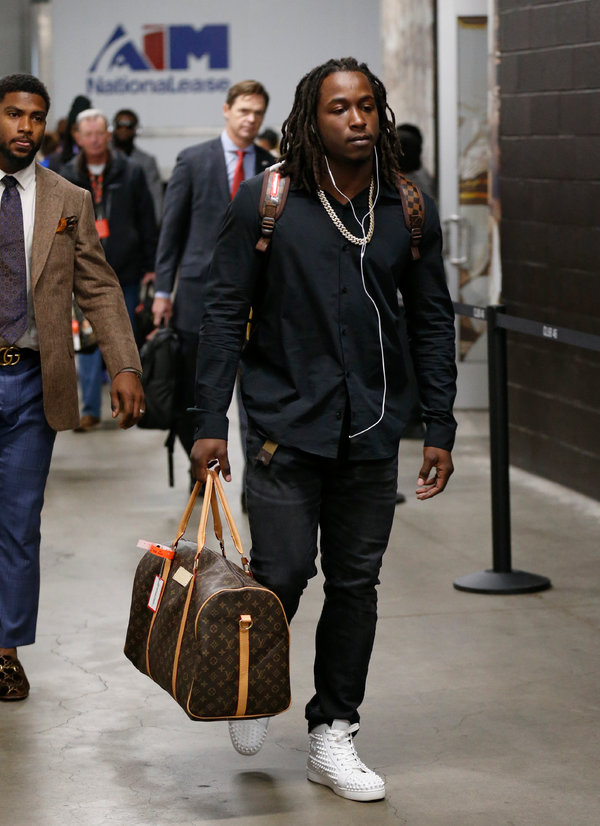 The 9 management declined to turn it over, the N.F.L. statement said. Yet the league did not seek to question Hunt about the suspected assault on Ottinger until after TMZ published video of the incident last week.

This account of the N.F.L.’s investigation is based on interviews with more than a dozen people, including team and league officials, law enforcement officials, witnesses to the incident and people with knowledge of the N.F.L.’s security procedures. Most of these people requested anonymity since they were not authorized to discuss the case.

The N.F.L. first learned about the incident at The 9 on Feb. 12, two days after it occurred, when a Cleveland police officer reached out to Patrick Foran, the league’s longtime security representative in Cleveland.

The league has a network of investigators in each city where its teams are located. These investigators, like Foran and an associate, James Davidson, are separate from investigators employed by each team. The N.F.L. does its own investigations because teams often have an incentive to protect their players.

“The team has their goal, which is to keep the player on the field, while the league wants to protect its brand,” one former team security officer said.

Over the next few days, Foran and Davidson obtained the police incident report and sent it to the league office in New York.

The Cleveland police department this week said that it has begun an internal investigation to determine how and why a department employee provided the report to the league seemingly without going through official channels.

Once the league had the report, N.F.L. officials in New York then told Foran and Davidson to find out whether The 9 had video of the incident, and if so to request it. But The 9 declined to turn over any video. Tony Quintal, an executive at the company that manages The 9, cited a company policy of only giving surveillance footage to the police. Quintal said the league never requested to interview any employees of the complex who had been working that night.

N.F.L. security representatives also tried to obtain surveillance video from the police, the league said, but the police did not have it. No one had major injuries, and the police had classified the incident as a misdemeanor assault, not serious enough for an officer to attempt to obtain the video.

In the case of Hunt, the N.F.L. conducted preliminary interviews with witnesses in February, but little appears to have happened between the initial efforts in February and this summer, when investigators from the N.F.L. reached out again to people involved in the February incident. Those calls might have been spurred by a new allegation against Hunt: that he had punched a man on June 3, on the island village of Put-in-Bay, Ohio, at the Bay Lodging Resort.

The N.F.L. declined to comment on the interviews about the June incident.

On Monday, TMZ reported that Hunt was also named in a police report after an attack at a Kansas City nightclub in January, when a man said that Hunt and a number of other people beat him. Hunt was not charged; in fact, no arrests were made. A spokesman for the Kansas City Police Department, Sgt. Jake Becchina, said the N.F.L. never reached out to him about the January incident.

One witness during the incident in February in Cleveland said a league security official called him during the summer. This person, who only spoke on the condition of anonymity, said he did not remember the name or title of the person he spoke to. He said the investigator asked him typical questions about what transpired that night, and about what he had seen.

This person said the investigator told him the league had talked to other witnesses, but that Ottinger and a friend who was also there that night had not been interviewed.

The league also asked the Chiefs what they had learned.

The investigation remained open because the league was still hoping to speak with other witnesses, according to a person familiar with league’s inquiry. The N.F.L. preferred to have everything in hand before approaching Hunt, though former security officials said that wasn’t always how the league operates.

One possible reason that TMZ is able to obtain videos when the league did not is because TMZ pays for them. TMZ reportedly paid almost $90,000 for the elevator video of the Ravens’ Rice punching his fiancé at the time in the head. TMZ did not respond to a request for comment on how it obtained the surveillance video from The 9.

Hunt’s agent, Dan Saffron, did not respond to multiple calls and emails requesting comment about his client and the investigation. Ottinger did not respond to emails or a message left at her parents’ house outside of Cleveland, and attempts to contact her through family members were unsuccessful. Other witnesses named in the police reports about the incident either declined to comment or did not respond to numerous messages.

That interview finally occurred this fall, before the release of the video that showed Hunt kick Ottinger as she lay on the ground in the hallway at The 9, but events of that night were not discussed, according to people with knowledge of the interview.

Dan Williams, a spokesman for the city prosecutor’s office in Cleveland, declined to say if prosecutors are pursuing the case or anticipate bringing charges. He also would not say if Ottinger has asked to press charges, or whether prosecutors have spoken to her or Hunt.

As for Hunt, he cleared waivers after the Chiefs released him, and no team has claimed him. He is currently on the commissioner’s exempt list, meaning he is ineligible to play even if he is signed, and still faces potential suspension for violating the league’s personal conduct policy.