This column originally appeared in the Sydney Morning Herald and The Age in July 2005.

A book could be written about Shane Warne’s first ball in Ashes cricket. Famously, it was the ball of the century, delivered with a rip of the fingers and snap of the wrist that sent the ball burning through the air and made it curl to leg before bouncing and turning prodigiously past the bat of a flummoxed opponent. Good morning, Mr Gatting. Good morning, England. My name is Warne and I bowl leg spin.

Ever since, English batsmen have been tormented by this supremely gifted, dedicated practitioner of the game’s most difficult and rewarding skill. Throughout he has been an extraordinary mixture: a darkness capable of creating light; a rascal who can fool a professional with a flipper (as he did Richie Richardson in Melbourne and Alec Stewart in Brisbane); a larrikin who can make the wise look foolish and the seasoned seem like novices. The surprising thing is that none of his victims have clocked him. And it was all seen in that first, deadliest delivery. 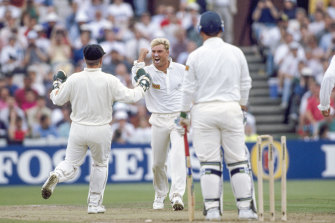 It was much more than a wicket-taker, much more than a statement of intent. It was a warning of a formidable cricketing power about to be let loose upon the game. A career was predicted in a moment, a life foretold in an instant. Here was a beach bum performing wonders. Warne had joined the immortals. Since then, he has been beyond containment, not least by himself.

Would you have it otherwise? Must not a man be taken as a whole? Of course he is a rogue, but he is not coming to tea. Nor is there any need to take everything he says literally. Has it not been proved often enough? Do you yearn for an off break dispatched by a civil servant? Another, more respectable, man could not have dared as much, a career upon the pitch of a ball, and against the flow of the times. The West Indies were the reigning champion side on that day in Manchester when this prize chump lobbed down his first Ashes delivery. Dennis Lillee was the local hero.

Warne ignored all of that. Instead, he changed the game until it fitted his requirements. You have to be good to do that; very, very good.

Imagine the nerve involved in sending down that delivery! Was it not a time to settle for something safe? He was not bowling on a sunny afternoon to an unknown in a park with only his loyal mother in attendance. His antagonist was not some fearful youth lately summoned by a sorely stretched selection committee but Mike Gatting, regarded as his country’s leading player of spin. Nor did the novice have much of a record. In his pot-bellied youth he had been turfed out of the cricket academy and flogged around Sydney by various Indians. He walked almost naked into the arena.

And still he did not hesitate. Disdaining all compromise, Warne decided to try his most demanding delivery. Wrenching shoulder, wrist and finger to a degree that eventually caused the surgery that took away some of his powers, making him ordinary everywhere except in his own mind, he produced the perfect leg break, a ball of such deadly content that even now it causes gasps. Imagine the reaction at the time! Imagine the response in the England dressing-room! Arguably it was the most beautiful moment the game has known, an affirmation of its enduring possibilities. Warne had announced himself as a brave competitor, a strength that has subsequently been confirmed a hundred times.

In some respects Warne has been lucky. Nature blessed him with ability. Providence provided a coach in Bob Simpson who understood the importance of attacking the blind spot. Fortune left a space to be filled. But Warne took his chance. He worked at his game until the ball obeyed his every instruction. His mastery did not come and has not been sustained by flashes of lightning. A lot of good deliveries are bowled between the wicket-takers.

Before him cricket had known accurate wrist-spinners who did not spin the ball much, and wild cards of unreliable pitch who turned the ball sharply. Always there had been the misers and the millionaires. Warne’s great secret has been his uncanny combination of control and movement.

Warne’s accuracy is part of his trick. He is two characters in one, the player and citizen, the wild man with supreme control, the maverick with unmatched mastery of his craft.

In his younger days, at the Australian academy, he did not always deport himself with the required delicacy. Nothing has changed on that or any other front. But he was always spinning a ball from hand to hand, always asking questions, always in the nets trying this and that. Throughout he has been fascinated by the intricacies of his calling. Warne was not born great. There was nothing inevitable about his rise. Rather, he was given the qualities needed to achieve greatness and made the most of them. He had the fortune to be born in the right place at the right time. Desperate to resume playing proper Australian cricket, the selectors were eager to find a wrist-spinner to end reliance on finger spin.

This column originally appeared in the Sydney Morning Herald and The Age in July 2005.