They will gather again on Saturday in the city they electrified half a century ago, at the first of a year’s worth of celebrations for the 50th anniversary of a miracle. The 1969 Mets, forever young in their minds, will be honored at the New York baseball writers’ dinner, mingling with stars of today — Mookie Betts, Jacob deGrom, Christian Yelich — who are young enough to be their grandsons.

“When I first went to the Mets, Casey Stengel was there,” Cleon Jones, the left fielder, said by telephone from Mobile, Ala. “And Casey Stengel was 75 or 76 years of age. That’s what I am now. And I looked at him as an old man — but I don’t see myself as an old man, even now. When you go back and look at all those things, all of it is so clear, like it was just yesterday.”

Jones made his major league debut near the end of the Mets’ second season in existence, on Sept. 14, 1963, at the Polo Grounds. The Mets — under Stengel, who retired two years later, at 75 — lost that day for their 100th defeat of the season. Yet in 1969, with nothing but failure in their brief and bumbling history, they won 100 games and then stormed to an unlikely championship.

It is hard to imagine, given today’s dreary landscape of New York teams, that the Mets’ title came in the middle of three local championships connected to 1969. The Jets won the Super Bowl in January, and as the Mets were thumping Baltimore in the World Series, the Knicks were starting their 1969-70 schedule, which ended in a title.

“It was probably the most incredible year for professional sports in the history of New York,” Art Shamsky, an outfielder for the ’69 Mets, said recently. “And for us personally, part of the story is not so much that we won, but where we came from. Even the year before, we’d finished ninth.”

Shamsky has written a book about the 1969 New York sports scene, and has another coming out in March: “After the Miracle: The Lasting Brotherhood of the ’69 Mets,” written with Erik Sherman. Shamsky is from St. Louis and last played for the Mets in 1971, but he still lives in New York. 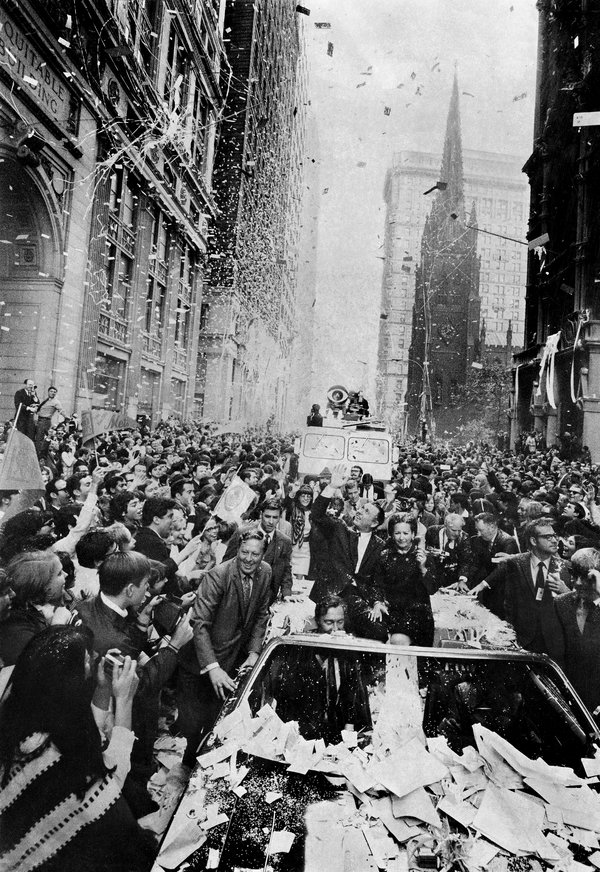 “When I first got traded here, I didn’t like New York,” he said. “I was playing with the Reds, and the city was too big, the Mets were not a good team. I was a little despondent. But I fell in love with the city, moved into Manhattan, and of course when you win a championship, it’s an easy decision to stay. People still remember it, which I find incredible.”

Or maybe not so much. In the years since, the Mets have won just one more World Series, in 1986 over Boston. It was another miraculous victory for the Mets, after they were down to their final out, trailing by two runs with the bases empty in Game 6.

The two championships featured an only-in-baseball kind of symmetry — the pitcher on the mound at the end of the 1969 World Series, Jerry Koosman, was eventually traded for Jesse Orosco, who closed out the 1986 title. And the manager of the 1986 Mets, Davey Johnson, made the last out for the Orioles in ’69 — a fly ball to Jones in left field.

Had Johnson’s ball cleared the fence, the Orioles would have tied Game 5 — just as the Mets’ Mike Piazza would have tied Game 5 against the Yankees in 2000 if his long fly drive to center had gone out. But both balls produced just a fleeting glimmer of hope; like Bernie Williams in 2000, Jones had it all the way.

“Davey Johnson said it’s the hardest ball he’s ever hit, and he didn’t know why it stayed in the ballpark, but when the ball went up, I knew it was an out,” Jones said. “That’s my claim to fame, the last out and the kneeling, praying, ‘Come on down, baby, come on down.’ People associate me with that, so everywhere I go, that’s what they do, get in position to catch the ball and get on one knee.”

Jones had never done that before, he said, but then again, he had never caught a ball that meant so much. He gave it to Koosman later, in the clubhouse celebration. Nobody besides Ed Kranepool cared much about memorabilia back then, Jones said.

Kranepool will be there with Jones, Shamsky, Ron Swoboda and Buddy Harrelson on Saturday. Kranepool, 74, is seeking a kidney donor. Harrelson, also 74, is fighting Alzheimer’s disease. Tom Seaver, the ace of the team and the greatest player in franchise history, has a vineyard in Calistoga, Calif., but has struggled for years with Lyme disease.

“You know, we’ve lost a number of guys from that team, guys I was very close with,” Shamsky said. “Tommie Agee, Donn Clendenon, Tug McGraw. They all died too young.”

Gil Hodges, the manager, would be 94 now; he died of a heart attack just before the 1972 season. Jones said Hodges had convinced the young Mets that they could win if they minimized mistakes, and got players to accept platoon roles for the greater good.

“Had it been anybody else as the manager — Yogi Berra or Wes Westrum, even Casey Stengel — you wouldn’t be talking about the ’69 Mets,” Jones said, referring to other Mets managers. “We won because of our leader, which was Gil Hodges.”

Jones clashed with Berra in his stormy 1975 season, his last in New York, marked by a .240 batting average and a humiliating news conference in which the owner M. Donald Grant forced him to apologize for a misdemeanor charge — later dropped for lack of evidence — when he was found sleeping in a van with a woman while recovering from knee surgery in Florida. Jones was released that summer, played briefly for the Chicago White Sox in 1976, and retired.

Jones eventually made peace with the organization. He coached in the Mets’ farm system in the 1980s and now spends his retirement refurbishing homes with his wife, Angela, for senior neighbors in Africatown, the historic district in Mobile where he was raised. He said they painted six homes last month.

For this weekend, and throughout this anniversary year, Jones and his teammates can feel young for just a little bit longer.